RABBITTOWN, Ga. — Cherokee Bluff rallied from a huge halftime deficit to avoid an East Hall upset, taking a 52-50 win in a crucial Region 8-4A North showdown on Tuesday at Valhalla.

Bluff trailed just 12-11 after the first quarter, but Levi Holtzclaw and CJ Abgorsangaya led a huge second-quarter surge for East Hall, outscoring Bluff 21-8 in the period for a 33-19 lead at the break. But the Bears dialed up the defense in the second half.

The Vikings were held to just 4 points in the third quarter as Bluff exploded for 21 points to take a 40-37 lead into the fourth.

The Bears hung on at the end for their second straight win.

Bryce Horton and Carlos Marlowe each finished with 12 points to pace Bluff. Horton had four 3-pointers. Boston Kersh added 10 for the Bears.

The Wildcats won their fourth straight game with a huge road win in Region 8-A Division 1.

Rabun County will play host to Commerce on Friday in another region matchup.

The Spartans got everything they could handle from the Indians but rallied in the fourth quarter for a big Region 7-3A win at home.

Xavier Felix paced West Hall with 14 points. Isaiah Holder added 9 points and Andrew Malin and Owen Jenkins had 8 points each for the Spartans.

Lumpkin County was led by Hunter Cooper, who had a game-high15 points.

The Lions slowly pulled away for a GIAA win over the nearby Eagles on Tuesday at the Lakeview gym.

The Eagles' Idan Azani had a huge game with 34 points, 4 rebounds, 4 assists, and 4 steals.

The Lions will next play host to Bethlehem Christian on Friday in another GIAA region showdown.

Riverside will hit the road on Wednesday againstTapestry Charter.

Lanier held North Forsyth to just 20 first-half points and held off a third-quarter charge to knock off the Raiders at home on Tuesday.

North Forsyth trailed 34-20 at the half but cut the lead to nine points after the third period.

Lanier, behind Jayce Nathaniel's game-high 32 points, outpaced the Raiders 18-7 in the final quarter to seal the win.

Cole Kirouac led the Raiders with 15 points, while Braden Mullis chipped in 11. 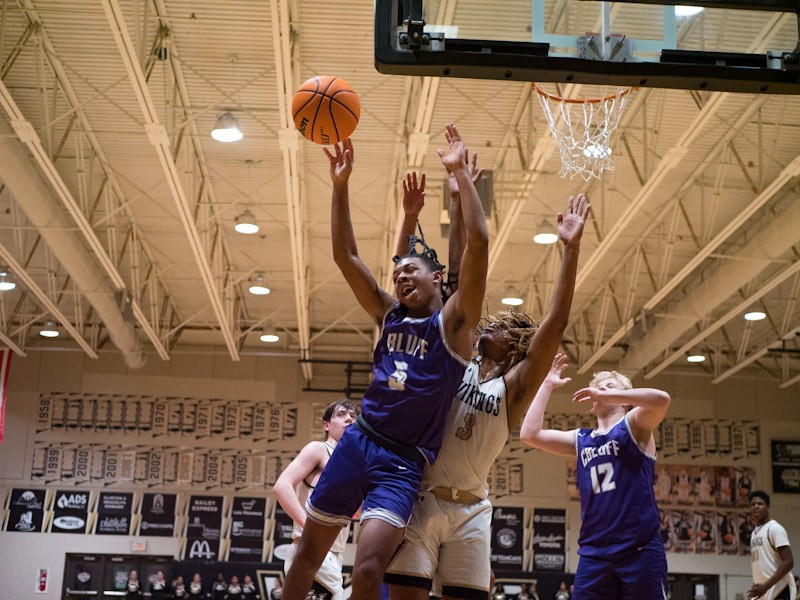 Cherokee Bluff's Carlos Marlowe (5) and East Hall's CJ Abgorsangaya (3) collide during their Region 8-4A North showdown at Valhalla on Tuesday. The Bears rallied from a 12-point halftime deficit to nip the Vikings, 52-50.