Although the junior walk-on from North Hall is fourth in tackles (10 total), he says he's got a lot to work on.

"This week, I have tried to focus on two things," he said. "I want to be the best tackler I can be. I wrote down that I have to bring my feet and no bending at the waist and keep my head up. Secondly, knowing and being more aware of down and distance situations, more specifically third down. That is what I want to focus on."

"Obviously, it was a big deal for me. It is my first one I am really proud of," he said. "First off, we got great pressure from our defensive line like we had been getting all game. We had them rattled. (Spencer Rattler) made a rushed decision thanks to our defensive line. Once the ball was in the air, I work that every day, and I tried to high point the ball. Thankfully, I came down with it."

Jackson came on to the scene during Georgia's national championship run. Injuries had decimated the Bulldogs' secondary, leaving the door open for Jackson to prove himself to the coaching staff.

"They epitomize what the culture of this program is. You are tough. You are physical. You listen. You try hard. you are selfless," Smart said. "They are all those things. That includes some talent. They have talent. You have to have talent to be here. You would not be able to play. Talent is not the overriding factor with those two guys. Caring about the program is. They set the tone. They were out there today in 90-something-degree heat, and I went over to both of them. We were getting our touches in and bumping up and saying that we need to go to work. They drive that part. Not just them, but so many others like them create a good bond among the guys to work hard."

Top-ranked Georgia plays host to Kent State Saturday at Sanford Stadium. Kick-off is set for noon on SECN+ and ESPN+. 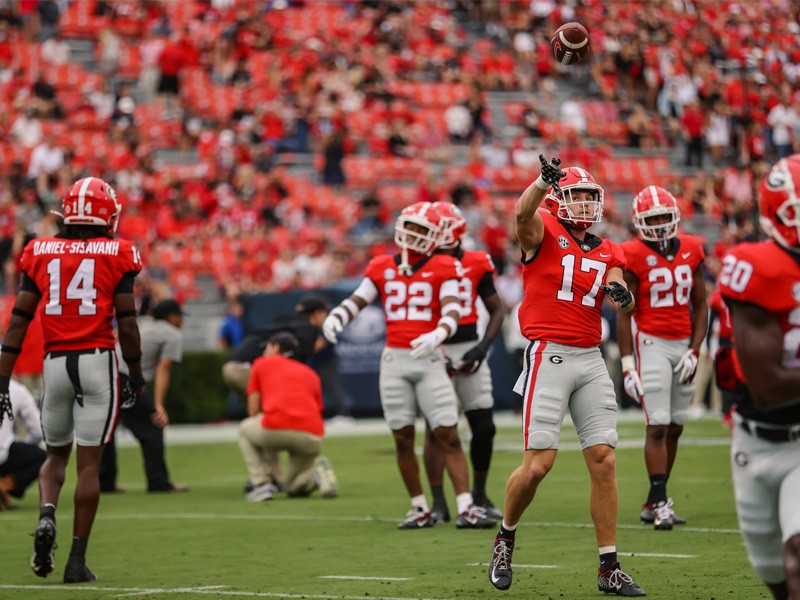 Georgia defensive back Dan Jackson (17) warms up during the first home game of the season against Samford on Dooley Field at Sanford Stadium in Athens, Ga., on Saturday, Sept. 10, 2022. Photo/Kayla Renie