MONZA, Italy (AP) — Having won in front of his own fans last weekend, Max Verstappen did it on enemy turf on Sunday to leave the Red Bull driver within touching distance of a second straight F1 title.

Boos rang out from the passionate red-clad tifosi fans when Verstappen stepped onto the iconic Monza podium for the first time in his career, after winning the Italian Grand Prix on Sunday.

“I had a great view,” said a tactful Verstappen, whose previous highest finish at the track was fifth in 2018. “The atmosphere for me was not amazing. But it is what it is.”

Verstappen now has a 116-point lead over Charles Leclerc, who finished second after another questionable strategy decision from Ferrari on its home track. With just six races remaining, the Dutch driver could clinch the title in Singapore next month.

Verstappen started seventh after he was among a number of drivers hit by grid penalties but made his way up to third by the first corner of the second lap. The Red Bull driver then picked off George Russell in a Mercedes at the start of lap 5 setting up the hunt for polesitter Leclerc in his Ferrari.

“The start was very good,” Verstappen said. “It was enjoyable to drive today even though it was quite hot out there. Great day for us.”

The Virtual Safety Car (VSC) gave Verstappen an opportunity as it came out on Lap 12 after Sebastian Vettel’s final race at Monza came to an ignominious end, with the four-time world champion pulling up at the side of the track after complaining about a power issue.

Ferrari decided to bring Leclerc in to change to medium tires, allowing Verstappen to take the lead. Leclerc rejoined the race in third.

“I think we all had a doubt, I think if I wouldn’t have done it Max would have done it," Leclerc said.

“It was a bit unfortunate because in the middle of the pit lane we had the virtual safety car ending so we didn’t get all the benefit of stopping at that moment. And from that moment onward we were a little bit on the back foot.”

It has been a strange season for Ferrari, full of botched strategy decisions and bizarre incidents, but Leclerc believes it was just unfortunate timing at Monza.

“I think if you look at our season as a whole, for sure there’s been mistakes and we need to get better," Leclerc said. "If today was a clear mistake, I don’t think so. It was just our choice and looking back at it you just cannot predict whenever the VSC is going to end.

"So, yeah, nothing to blame on anybody there. Just a bit unlucky and probably missing a little bit of pace too.”

Leclerc moved past Russell and then briefly regained the lead when Verstappen pitted on the 26th lap but the pair swapped places again seven laps later when the Ferrari driver pitted for new tires for a second time.

The safety car came out again shortly after last year’s winner, Daniel Ricciardo, pulled up on lap 47 prompting most drivers to pit for soft tires.

However, a final battle never materialized when the race finished behind the safety car with Verstappen securing his fifth straight victory and his 11th of the season — one more than last year.

Russell was third, ahead of Carlos Sainz, Jr. and Lewis Hamilton, who had both fought through the field after starting at the back of the grid following penalties.

Verstappen’s Red Bull teammate Sergio Pérez had also been hit by grid penalties and had started 13th but, despite an eventful race that also featured a brake fire, he managed to finish sixth and also pick up the extra point for fastest lap.

Lando Norris was seventh, after a poor start from third, with Pierre Gasly just behind him.

Williams reserve driver Nyck de Vries finished his first-ever F1 race in ninth. The 27-year-old was a late replacement for Alex Albon after the Thai driver was diagnosed with appendicitis.

“Wow, wow. Thank you, thank you very much. This has been incredible, points on debut, thank you,” De Vries said on team radio after crossing the line, before then uttering an expletive and adding “my shoulders are dead, dead.” 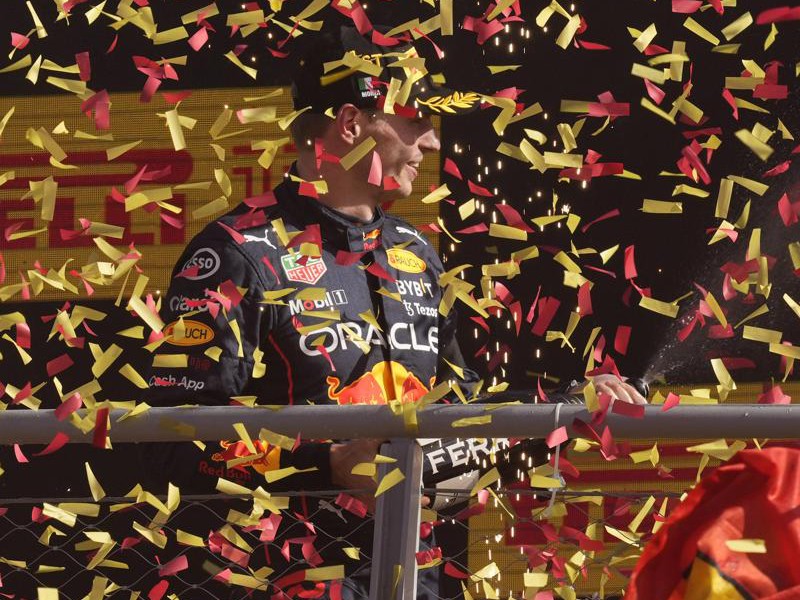