Kyle Larson made the save of the year last Sunday at Darlington, and Joey Logano made a steady run to the top of the NASCAR Cup Series standings.

Now the 16 championship hopefuls head to Kansas Speedway for the first trip to a 1.5-mile intermediate speedway since May. They’ll be battling to improve their positions in the standings in Sunday’s race.

Believing he had an engine issue at Darlington, Larson pitted for repairs on lap 79 of 367. He lost three laps and dropped to 35th in the running order as his crew worked under the hood before sending him back onto the track.

The engine problem ameliorated, and Larson regained the lead lap as the beneficiary under a lap 231 caution, after recovering two of the lost circuits with wave-arounds. Larson finished 12th and, instead of dropping below the Playoffs’ Round of 12 cutline, he enters the Kansas race seventh in the standings, 17 points to the good.

“I feel like every week has been pretty wild and unpredictable,” said the reigning Cup Series champion and defending winner of the Kansas race. “Darlington was maybe a little bit (wilder) than normal compared to other races this year, but I feel like every race this year, the majority of the field has had some sort of issue go on throughout the race.

“As much as I want to say Kansas will be different, I just don’t know. It could be even crazier. But I hope that we can have a smooth week, get some points, and try and put ourselves into a better position as we go to Bristol (for the Sept. 17 cutoff race).”

Logano grabbed the lead in the Playoff standings with a strong fourth place run at Darlington, but it didn’t come without a fight. After starting from the pole, the 2018 series champion fell out of the top 10 after a slow pit stop on lap 75 and spent the rest of the race working his way back into the top five.

“It’s a solid day but a missed opportunity is probably where I would put it,” said Logano, who leads second-place William Byron by six points. “With so many others having trouble, every time you come to the Southern 500, especially in the Playoffs, you’ve just got to survive, and you get a solid finish.

“That’s what we were able to do is finish fourth after so many teams had issues. We had plenty of our own issues, too. We gave up track position a couple times and then we got caught with that caution and lost track position fairly late in the race (lap 275), and then we just battled hard.”

Logano has to like his chances at Kansas, where he has claimed three victories (all in Playoff races) and two poles. But the Playoff field remains tightly bunched, with Logano leading 16th-place Kevin Harvick by only 49 points.

Harvick, who also has three Kansas wins on his resume, trails 12th-place Daniel Suarez by a mere 13 points. In other words, Sunday’s Hollywood Casino 400 could prove to be the salvation — or the undoing — of any driver in the Playoffs.

The series hasn’t raced on an intermediate track since the Coca-Cola 600 at Charlotte in late May. Consequently, teams have been trying to gauge advances with the Next Gen car through simulations.

Kurt Busch won the May race at Kansas, with Larson running second, but Busch has been sidelined with concussion issues and gave up his spot in the Playoffs while he recovers.

Last Saturday at Darlington, Sheldon Creed made a dramatic bid for a victory but came home second in a three-car battle against race winner Noah Gragson and double-duty driver Kyle Larson.

Creed could have clinched a spot in the NASCAR Xfinity Series Playoffs with a win. Instead, the trails 12th-place Ryan Sieg by 16 points with two regular-season races left as the series heads to Kansas Speedway on Saturday.

Creed has never raced at Kansas in the Xfinity Series, though he did post a runner-up finish there in the NASCAR Camping World Truck Series in 2020.

Sieg, on the other hand, comes to Kansas with three straight top fives and five straight top 10s at the 1.5-mile intermediate track.

Ty Gibbs is the defending winner of the event and is the favorite to win a second straight race at the track. Second in the standings, Gibbs trails leader A.J. Allmendinger by 51 points in the battle for the regular season championship.

“I’m looking forward to heading back to Kansas,” Gibbs said. “We won there last year in the Xfinity car, the same weekend we clinched the ARCA championship, so it’s a special place for me.

“Hopefully, we can get another win, as there are only two more races before the Playoffs start, and we would like to get all the points we can to give ourselves the best shot in the final seven races.”

The first two races in the NASCAR Camping World Truck Series Playoffs settled two issues — both Grant Enfinger and Chandler Smith will advance to the Round of 8, thanks to their respective victories at Lucas Oil Indianapolis Raceway Park and Richmond Raceway.

The final six positions, however, are very much up in the air entering Friday night’s elimination race at Kansas Speedway.

Eighth place Matt Crafton, a three-time series champion, leads ninth-place Carson Hocevar by three points and 10th-place Christian Eckes by six. Those three drivers in particular will be battling on Friday for the final spot in the Round of 8.

Based on experience, Crafton should have an edge. The 46-year-old driver has raced in all 24 Truck Series events at the track, dating to 2001, and has fashioned three victories there, the most recent in 2020.

But Crafton hasn’t shown his customary speed during a winless 2022 campaign. That leaves room for Hocevar and Eckes to compete for the final Playoff berth.

“I’m excited to go back to a mile-and-a-half (track), which seems to be more of our bread and butter,” said Hocevar, who finished 15th at Kansas in May. 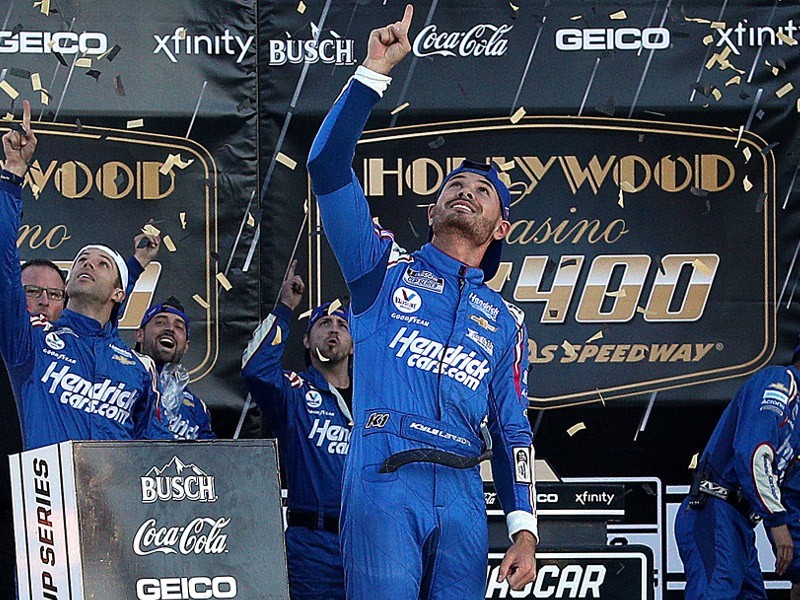