Since the introduction of the elimination format into the NASCAR Cup Series Playoff in 2014, no 16th seed has come close to qualifying for the Championship 4 race.

Then again, before University of Maryland Baltimore County drubbed Virginia in the first round of the 2018 NCAA basketball tournament, no 16th seed had ever beaten a No. 1.

So why can’t Richard Childress Racing driver Austin Dillon, who barged into the postseason with a dramatic victory in last Sunday’s regular-season finale at Daytona, dream about a deep run in the Playoffs, which start with Sunday’s Cook Out Southern 500 at Darlington Raceway?

“Why not?” Dillon asked rhetorically during Thursday’s NASCAR Cup Series Playoff Media Day at the Charlotte Convention Center. “I’m confident at the tracks in the Playoffs. RCR has shown speed at every type of track with Tyler (Reddick) winning the road courses, us winning the speedway (Daytona). Martinsville, I finished third but was probably the second-best car there.

“And we probably should have won the 600 at Charlotte. I was really close there when you got down to it. I’m happy to be in this spot, and I think we’re the dog. Some people are already putting us out, which is just fine with me, because it takes pressure off, and we’ll go have fun and try to upset some of these guys and take it as survive-and-advance mode from here on out.”

Another cause for optimism among the lower seeds is the unprecedented tightness of the Playoff field in terms of starting points positions. Only 20 points separate second-place Joey Logano from 16th-place Dillon, and positions five (William Byron) through 16 in the standings are covered by a nine-point spread.

Only regular season champion Chase Elliott has anything that resembles a working margin. He’s 15 points clear of Logano, who won the 2022 spring race at Darlington from the pole.

“We’ve never been in that position before,” said Elliott, who starts the postseason with 40 Playoff points in the bank. “This is a good thing. I’d love us to put ourselves in that position more often year after year.

“It means you’ve probably had more fun that year. It also means you’re trying to hedge your bet. Nothing is guaranteed, but it can certainly help. That’s the big one… we want to hedge that bet and better our odds as much as possible.”

Darlington is likely to create more separation between the Playoff contenders. The Cook Out Southern 500 is a grueling race in which drivers run close to the outside walls at the 1.366-mile egg-shaped track, where tensions remain high throughout.

One lapse of concentration can lead to disaster.

Dillon, for one, is up to the challenge

“I love that track,” he said. “People ask me what’s my favorite track, and I’ve gone to saying the places you win, so Daytona and Charlotte. But Darlington is my favorite. It’s like driving back in time. It’s a driver’s track.

“Tire management comes into play. It’s a long race, and you’re racing the race track. Historically, that’s been good for me.”

If Ty Gibbs plans to make a move toward the NASCAR Xfinity Series regular season championship, now would be a good time.

The driver of the No. 54 Joe Gibbs Racing Toyota has a series-best five victories this season, but he trails three-time winner A.J. Allmendinger in the standings by 58 points with three races left in the regular season.

Allmendinger has held the top spot in the standings for 17 straight races. Darlington, however, is not one of his best tracks, and if Gibbs wants to make a dent in Allmendinger’s hefty points lead, he can start with Saturday’s Sports Clips Haircuts VFW Help A Hero 200 at the Lady in Black.

Allmendinger has other ideas, but his attitude toward Saturday’s race can best be described as cautiously optimistic.

“Darlington is such a tough race track to master,” said Allmendinger, who finished eighth at the speedway in May — his first top 10 there in three Xfinity starts. “The last time we raced there in the spring, we didn’t quite have the grip and speed we needed, but still came away with a top-10 finish.

“I think we were able to learn a lot from that, and hopefully that shows this weekend.” 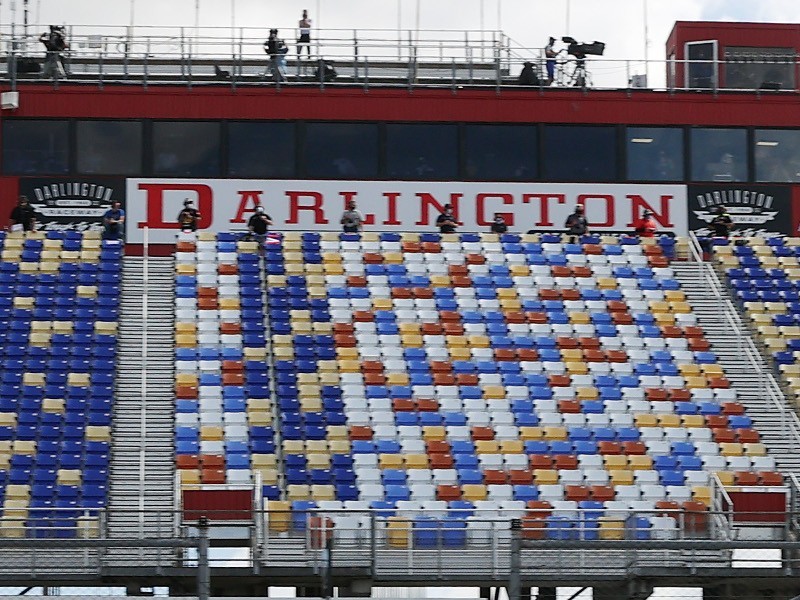