No first-time Playoff driver has ever advanced to the final round of the Playoffs (with the obvious exception of the inaugural year of the elimination format in 2014) but many say it would be no surprise to find one there this season with such a strong contingent of Playoff “rookies” — all driving for strong teams, and all just as motivated as the more seasoned Playoff veterans.

The veterans bring their experience, but this year’s new class of Playoff talent brings plenty of reason to consider this one of the most unpredictable championship chases in recent memory.

Chastain, driver of the No. 1 Trackhouse Racing Chevrolet, carries a pair of victories (at Talladega Superspeedway and Circuit of The Americas) into his title run. He starts the trophy chase re-seeded third in the standings, only 20 points behind Regular Season Champion Chase Elliott — highest among the first-time Playoff contenders.

And unlike so many of the tried-and-true veterans, Chastain conceded he arrives at Thursday’s Playoff Media Day at the Charlotte Convention Center making a point to savor this first-time Playoff experience.

“This is the exact spot that I’ve worked really my entire racing career toward…11 years of wanting to be, as silly as it sounds, at Playoffs Media Day in the Cup Series,” a smiling Chastain conceded.

Not only did the 29-year-old Floridian score his first career NASCAR Cup Series win at COTA this Spring, but he is also one of eight multi-race winners this season. His 10 top-five finishes tie him with Elliott for most in the series, and his 14 top-10 finishes are second only to Elliott’s 17.

Many people consider him a legitimate threat to advance in the Playoffs. Chastain, however, refused to get too specific about his chances.

Briscoe, 27, driver of the No. 14 Stewart-Haas Racing Ford, earned his first career NASCAR Cup Series victory in the fourth race of the season at Phoenix, which is also the venue for the championship finale on Nov. 6. The former Xfinity Series championship contender said he realizes he is probably considered an “underdog” by many in the 2022 NASCAR Cup Series Playoffs — ranked 12th among the 16 championship-eligible drivers.

“I kind of like that, because you can kind of go under the radar and do your own thing and there’s not as many cameras on you and people talking about you, and you can just go do your normal deal at the race track,” Briscoe said.

“I like that part of it, but from a speed standpoint, I feel fully capable that we could get there. It’s just been stuff I’ve been doing, self-inflicted, that kill our day, so if we can get it all together, I feel confident we can make a run in the Playoffs for sure.”

That optimism is shared even by those with more experience in the championship run. No one in the large sample of championship-eligible drivers asked to identify a “championship favorite” would or could do so, with the notable exception of Joey Logano.

Joey Logano Considers Himself The Favorite To Win Cup Title

Team Penske driver Joey Logano concedes the Fords as a group haven’t quite caught up with the speed shown by the Chevrolets and Toyotas in the NASCAR Cup Series.

Nevertheless, the driver of the No. 22 Team Penske Ford Mustang considers himself the favorite to win a second title.

His rationale hinges on the performance of his team heading into Sunday’s Cook Out Southern 500, the first Playoff race at Darlington.

“You know me — I always feel like I’m the favorite,” Logano said on Thursday during NASCAR Cup Series Playoff Media Day at the Charlotte Convention Center. “I race that way. That confidence is very important, and I think we have reason to feel that way.

“I told my team this yesterday — we’re the favorites, and here’s why.”

Logano proceeded to enumerate the factors that have buoyed his confidence entering the postseason.

“I feel like my team is executing on all eight (cylinders) right now. When you look at the way we are managing the races from a strategy standpoint, (crew chief) Paul (Wolfe) is doing great at that, where we’re finishing better than the speed in our car. So that part’s great.

“Our pit stops have been solid. That’s what you want out of your pit crew…Our restarts and execution on the race track have been great here lately. That’s where we’ve really made the difference. When you look at the stage points and the finishes, all that’s coming from how we execute the races throughout it, without the fastest car.

“And then when we get a car that’s capable of winning — look out!”

The tracks in the Round of 16 set up nicely for Logano, too. He won this year’s spring race at Darlington from the pole. At Kansas and Bristol, host venues for the second and third Playoff races, Logano has a combined five victories, three at Kansas and two on the Bristol concrete.

Trackhouse Racing driver Ross Chastain has certainly garnered headlines and attention this season, both for his career-first NASCAR Cup Series victories and for his aggressive moves on track. Incidents with various drivers, including fellow championship contender Denny Hamlin, have been in the spotlight throughout the season.

Chastain fully acknowledged that navigating his championship hopes may depend on the way he handles potential “payback” on the track. He insisted Thursday that he wasn’t focusing on that.

“I don’t actually keep up with what people are saying,” Chastain said. “And then on track, I know who’s around me and I know obviously every situation and every scenario that’s happened this year, so you can tell right away if a car is driven aggressively toward me or not.

“Off-track, I probably don’t do a good enough job keeping up with the words being said.

“I’ve had a lot of opinions given to me and a lot of advice, and I truly believe it’s all with the right intentions,” Chastain continued. “But honestly, my iPhone is out of storage space and can’t take any more else, it has no more storage. I’m kind of that way too. There’s a lot that just kind of goes in one ear and out the other, for better or worse.

Kyle Busch acknowledged on Thursday that he has more than one contract offer on the table but making a decision about his future as a driver has complicated his life as the NASCAR Cup Series Playoff approaches.

“I was hoping yesterday,” Busch said when asked when he might have a deal to announce. “I’m not going to put a timeline on it, but time is a ticking, and there are a lot of other options and a lot of other dominoes that need to fall.”

An elite driver with 60 Cup victories and two series titles to his credit, Busch clearly has options.

“More than one that has paper in front of me,” he acknowledged.

But the process has been anything but comfortable.

“Trust me, my gut doesn’t feel good, and that’s not just for decisions being made, but more so of decisions being weighed and the perception in how you come across to all of those that you’re going to disappoint. Right?

“There’s going to be one winner, and the rest are not winners, if you look at it in that regard. Good for me, but I definitely don’t want to come across as a lead-on or a liar or anything like that, so that’s why it’s been touch and go, and tread lightly.”

Busch described his decision-making process as one of the toughest periods of his life, but he doesn’t think the stress of the negotiations will prevent him from winning a third championship with his current No. 18 Joe Gibbs Racing team.

“It weighs on you every day of the week,” Busch said. “I think the best thing that I have for me is experience in being able to go race on Sunday. I’m a racer. That’s all I know. So, when I get to the race track every weekend, I put my helmet on, and that’s what I focus on.

“Being by myself, I do my best work inside that car, so I don’t have to think about anything besides making that car go fast.”

Unlike Joey Logano, Chase Elliott doesn’t see himself as a clear favorite to win the NASCAR Cup Series championship.

Of course, Elliott is one to play his cards close to the vest, but it does seem strange that the driver who has the most wins in the series to his credit — four — as well as the regular season championship, wouldn’t exude more confidence as the Playoff approaches.

“There’s been too many people good at different times,” Elliott said. “Just because we have (more wins) than other people doesn’t mean other people aren’t capable of winning or having a good day, too.

“You‘ve got to respect the whole field, in my opinion. There’s a lot of really talented drivers, a lot of smart people working at these things.”

Nonetheless, Elliott does have 40 Playoff points, 15 more than second-place Logano, and those points will carry through the Playoff with him, as long as he continues to advance. Though Elliott acknowledges the importance of the Playoff points, he doesn’t feel they constitute a bulletproof insurance policy.

“I honestly don’t think anybody’s safe at any point in time,” Elliott said. “It’s just my honest opinion. I think the way this format is, I think you have to respect this format from week one all the way to week 10.

“I don’t think there’s ever a period of time where you should think anything is taken for granted, and I don’t think any amount of Playoff points is ever safe. The rounds are so short, you could have two bad weeks back-to-back—and you do nothing wrong. And the next thing you know you’re in a position where you have to win the last one.

While the majority of drivers in Thursday’s Playoff Media Day fully conceded there was no single overwhelming pick to win the season trophy. All of them — from weekly frontrunners to new Playoff drivers — were able to make a case for being legitimate title favorites.

That, of course, included the most recent title winner, Hendrick Motorsports driver Kyle Larson, who has two wins in 2022 and is ranked fourth in the standings, 21 points behind Hendrick teammate Chase Elliott.

“We are a championship contending team, and we have all the parts and pieces to get it done,” Larson said. “I’m definitely confident.”

Larson did share that the flow of work and information sharing for the Playoff portion of the season will be no different for the four Hendrick Motorsport teams — all race winners during the season and all expected to be contenders beginning with Sunday’s Playoff-opening Cook Out Southern 500 at Darlington.

“Everybody works probably even better together during the Playoffs,” Larson said, dismissing any notion that the four teams may operate more independently during the championship run.

“(Team owner) Rick (Hendrick) has four opportunities to win, and we want to give him a 100 percent of an opportunity to win once we get to (the Championship 4 race at) Phoenix. So, I feel like we work together closer. Just the way I experienced it last year in the competition meetings and stuff like that, so, yes, it’s no different (than the regular season), if not better.” 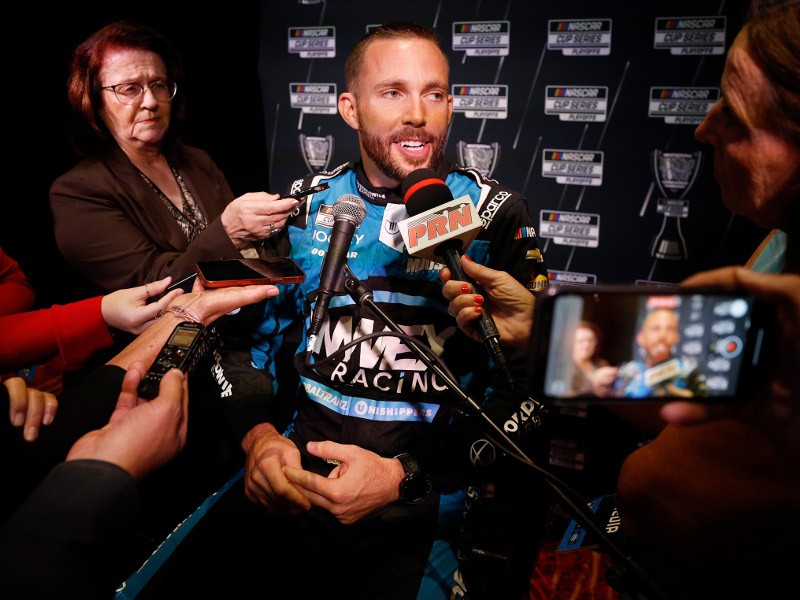