Walker accepts debate invite, but not one that Warnock chose

ATLANTA (AP) — Georgia Republican Herschel Walker has accepted an invitation in his U.S. Senate race to debate Democratic incumbent Raphael Warnock, but it's not one of the three debate invitations Warnock earlier accepted, leaving it unclear whether the two will actually clash in person before the November general election.

Walker's campaign said Wednesday that the candidate had accepted an invitation from Nexstar Media Group and other television stations to debate Warnock in Savannah on Oct. 14.

“It is time that people see the difference. So on Oct. 14, I want Sen. Warnock to be ready, because I have accepted a debate, and now he can quit talking and show the people he’s going to stand behind his words and show up for the debate," Walker told Fox News host Sean Hannity on Tuesday.

Walker has been proclaiming his readiness to debate Warnock for months, but his campaign in recent weeks has expressed concern over whether the formats and moderators would be fair to Walker. The GOP nominee skipped debates during his easy primary win, despite criticism from some Republicans.

Warnock and Democrats have been relentlessly attacking Walker as unqualified and untrustworthy after months of negative news stories, and polls show Warnock narrowly ahead, increasing pressure on Walker. Georgia is one of the most important states as Republicans attempt to recapture control of the Senate from Democrats, who took over the chamber only after Warnock and Sen. Jon Ossoff won twin runoffs in January 2021.

Warnock in June accepted invitations for three debates from WTOC-TV in Savannah, the Atlanta Press Club, and a group of news organizations in Macon.

Walker’s preferred debate would be aired on Nexstar stations WSAV-TV in Savannah, WJBF-TV in Augusta and WRBL-TV in Columbus, as well as WAGA-TV in Atlanta, WGXA-TV in Macon and WFXL-TV in Albany. The debate would take place in front of a live audience somewhere in Savannah.

WSAV-TV reported Wednesday that Walker would only participate in its debate. Walker spokesperson Mallory Blount did not respond to a question from The Associated Press about whether Walker would decline other invitations.

As of Wednesday, Warnock's campaign said he was still committed to those invitations and had not accepted the Nexstar invitation.

A proposal provided by the Walker campaign indicated Nexstar would tell candidates in advance about the topics to be discussed, but not specific questions.

For now, the Atlanta and Macon debates are still on, organizers said Wednesday, with Warnock and Libertarian Chase Oliver having accepted. Laurie Strauss of the Atlanta Press Club said the club has been in talks with the Walker campaign.

“I'm still hopeful we'll be able to get them to confirm,” Strauss said.

The Atlanta Press Club represents candidates who refuse its debate with an empty podium, letting other candidates bash the absent debater freely. Those sessions also allow candidates to question each other.

Debbie Blankenship, the executive director of the Mercer University for Collaborative Journalism, which is organizing the Macon debate, said her group has never heard back from the Walker campaign despite multiple attempts to contact the candidate.

Blankenship said the consortium of news organizations wanted to mount a debate to make sure candidates address the needs of middle Georgia and rural Georgia. She said debates are a chance to hear from candidates directly.

“I think it just gives the candidates an opportunity to answer questions directly,” Blankenship said. “They're not filtered through political ads or news releases.”

The story has been edited to correct the date of the debate to Oct. 14. 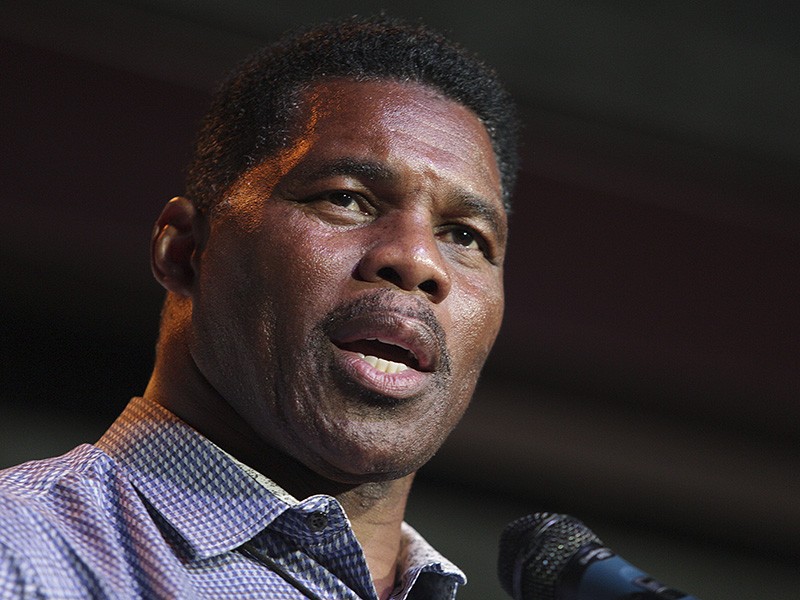 Herschel Walker, GOP candidate for the US Senate for Georgia, speaks at a primary watch party May 23, 2022, at the Foundry restaurant in Athens, Ga. Senate candidate Herschel Walker said Saturday, June 18, that he “never denied" the existence of children he had not previously disclosed publicly, telling conservative Christians that “they knew the truth.” (AP Photo/Akili-Casundria Ramsess, File)