NASCAR said Sunday it will return the exhibition race to the Southern California sports landmark next season. The Clash’s highly successful debut there four months ago was part of the launch of NASCAR's Next Gen car and NASCAR received some of its most positive reviews in years for the race.

The Clash took place on a temporary 0.25-mile track inside the venerable Coliseum. Joey Logano won the exhibition, which included a halftime show by Ice Cube as part of a six-hour entertainment extravaganza that pleased both the teams, sponsors and fans in this frequently staid sport.

“It was really an easy decision to come back for 2023 after the success of this year,” NASCAR executive Ben Kennedy said before the Cup Series race at Sonoma. “A ton of fans came out for that event. A lot of first-time fans. A lot of young fans. You saw the USC student section, and it was packed. Really just a fun day overall.”

The upcoming race likely will take place shortly after the 100th birthday of the Coliseum, which opened in January 1923. The asphalt on the short temporary oval on the Coliseum field held together well in the first edition, and crews were able to quickly fix any damage to the walls from the tight racing in close quarters.

Kennedy, the great-grandson of the series’ founder, spearheaded The Clash's move to an unfamiliar venue. With NASCAR's success in Los Angeles, Kennedy and the series' leadership are eager to explore other opportunities for expansion and exposure in new markets, both domestically and abroad.

“There's a lot of opportunities out there,” Kennedy said. “It's difficult to find a footprint to build a quarter-mile track, but it really opens the door to a lot of iconic stadiums and some pretty big events we could have.”

The first 43 editions of the Clash had been held at Daytona International Speedway from its inception in 1979, but NASCAR relocated it to the West Coast in a bid for excitement and attention in an eye-catching venue. NASCAR hadn’t raced in a traditional sports stadium since 1956 at Chicago’s Soldier Field, but it put on a show with Ice Cube rapping on the Peristyle, Pitbull also performing and Jeff Gordon lighting the famed cauldron.

The Coliseum, which has hosted two Olympics and the first Super Bowl, is still the home of the USC Trojans football team. The arena also hosted the NFL's Los Angeles Rams until they moved into SoFi Stadium in 2020. 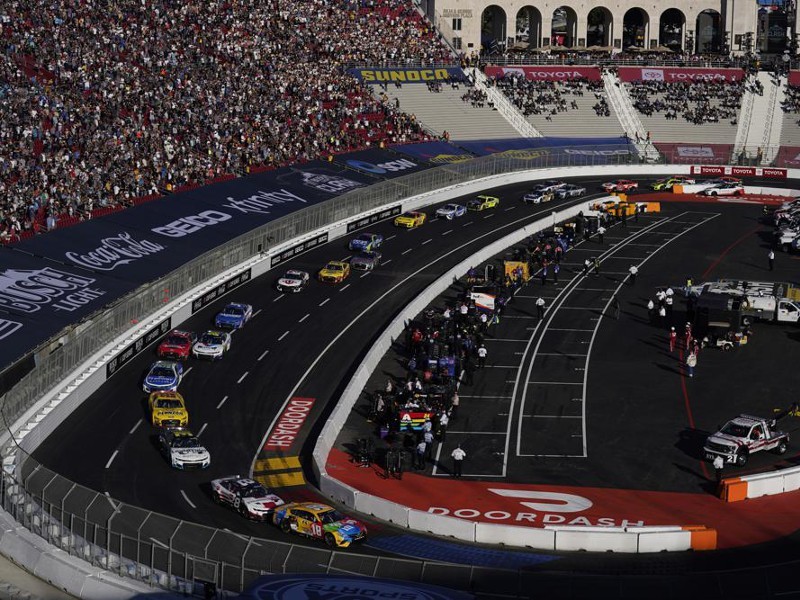