Suárez, a 30-year-old native of Monterrey, finally won in the 195th career start of a Cup Series career that began in 2017. He also drove his Trackhouse Racing Chevrolet to the third Cup Series victory of the season for this rising 2-year-old team co-owned by former driver Justin Marks and music star Pitbull.

Suárez got past Buescher and took charge early in the final stage on this hilly road course in Northern California wine country, and he persevered through a pit stop and a caution to emerge in front with 23 laps to go. Buescher pushed him aggressively, but Suárez made no significant mistakes while rolling to victory.

“It’s crazy,” Suárez said. “I have so many thoughts in my head right now. It’s been a rough journey in the Cup Series, and these guys believed in me. I have a lot of people to thank in Mexico. My family, they never gave up on me. A lot of people did, but they didn’t. I’m just happy we were able to make it work.”

Suárez's team partied wildly when it was over, even pulling out a celebratory piñata shaped like a taco. The piñata was requested by Suárez for whenever he got his first win and clinched a spot in the playoffs — and he celebrated by punching a hole through it with his fist.

“They believed in me since day one,” Suárez said of his team. “(We've got) all the people, all the resources to make it happen.”

Suárez then addressed his fans briefly in Spanish, saying: “This is the first one of many.”

Buescher's second-place finish was also a season best in his RFK Racing Ford. He fell just short of his second career victory.

“Hurts to be that close, but congratulations to Suárez,” Buescher said. “We were trying, trying to get him. Ran out of steam there.”

The success of Suárez and Trackhouse Racing could be a welcome boost to a sport eager to expand its cultural footprint. After moving to the U.S. 11 years ago with a desire to race on bigger stages, Suárez is a major success story for NASCAR's Drive for Diversity program, which aims to bring new perspectives and backgrounds to a largely monocultural organization for much of its history.

Michael McDowell finished a season-best third in front of Kevin Harvick in cloudy conditions in Sonoma Raceway’s first Cup Series race at full capacity since before the coronavirus pandemic. The crowd included about 350 rowdy fans from Suárez's program, Daniel's Amigos, which allows kids in several NASCAR cities to attend races.

Austin Cindric was fifth in the final race before the Cup Series’ one-week midseason break.

Sonoma Raceway restored the 1.99-mile Chute track layout for this race after using the longer Carousel configuration in the previous two editions in 2019 and 2021. The shorter track didn't appear to lead to more contact in the racing, and not much happened in the first two stages, which were won by Larson and Joey Logano.

Defending champion and pole-sitter Kyle Larson led the first stage, but the defending series champ fell back from there and eventually lost his right front tire with 27 laps to go. Larson started on the pole for the fifth consecutive time at the race closest to his childhood home in the Sacramento suburbs, but his decision not to pit in the first stage left him buried in the field from there. He finished 15th.

After the break, the season resumes with a trip to Nashville Superspeedway on Sunday, June 26. 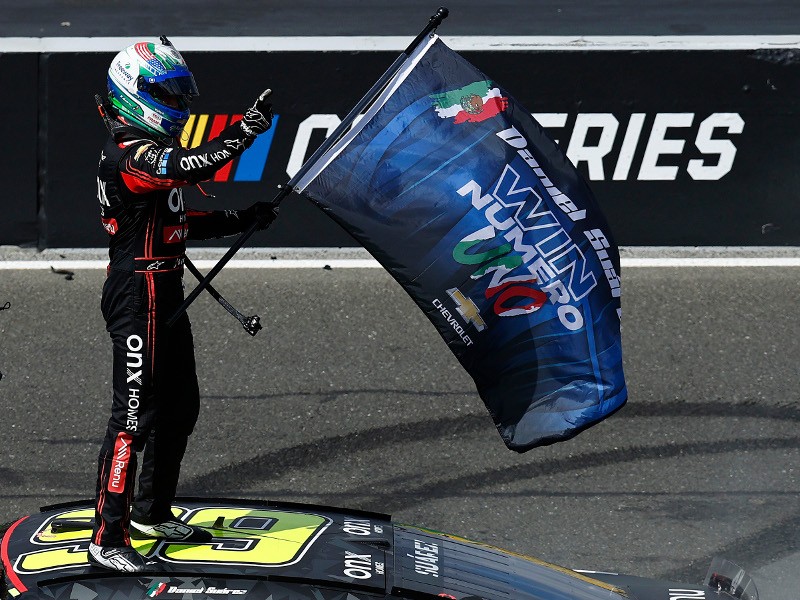