Sonoma Raceway gears up for the NASCAR Cup Series

The NASCAR Cup Series annual trek to Sonoma Raceway in California wine country remains one of the most anticipated stops on the schedule and Sunday’s Toyota / Save Mart 350 looks to be the race’s next great competitive chapter.

The top-six drivers in the standings, from leader Chase Elliott to sixth place Joey Logano, are separated by only 40 points. Three drivers ranked in the top 10 – Ryan Blaney, Martin Truex, Jr. and Christopher Bell – are still looking for their first victory of the season.

And defending race winner Kyle Larson hasn’t won a race since February 27 at Auto Club Speedway, the last time the series raced in his native California, 13 races ago.

This week NASCAR has elected to run a different version of the iconic Sonoma Raceway road course – a shorter 1.99-mile configuration that eliminates the ‘carousel’ – turns 4-7 – used since 2019. The longer straight known as the ‘chute’ is expected to increase passing opportunities.

Truex, whose three wins and 213 laps led is most among active drivers at Sonoma, heads west hopeful to punch his automatic Playoff ticket. He’s won twice and finished third in the last three races there.

And this week his former championship crew chief Cole Pearn will serve as an engineer on Truex’s No. 19 Joe Gibbs Racing pit crew – the first time Pearn has worked in the series since he left the sport following the 2019 season. Truex is hoping that familiar relationship will result in a maiden 2022 victory. He has seven top-10 finishes on the season and led laps last week at Gateway.

“I love going there, I love the racetrack, but this week is a huge question mark for everyone – new car, new tires, five gears instead of four, different brakes and different everything,” Truex said this week.

“There’s a big question mark of if our old approach will still work there. Not just the way I drive the car, but how is the tire going to be and what will the falloff be? … A lot of things up in the air, but we’re doing everything we can to show up ready to go on Saturday for practice and qualifying and then the race on Sunday.”

Larson, driver of the No. 5 Hendrick Motorsports Chevrolet, was runner-up to Elliott at Austin, won the Sonoma, Watkins Glen, N.Y. and Charlotte road course races and finished third at the Indianapolis Grand Prix.

Elliott, driver of the No. 9 Hendrick Motorsports Chevrolet, won at the Austin and Road America, finished second at Sonoma and Watkins Glen and fourth at Indy last season. Seven of Elliott’s 14 career NASCAR Cup Series wins have come on road courses making him the winningest active driver on that style of track.

“I’ve always had some good speed at Sonoma and it’s my home track,” Larson said. “It’s always fun to see my friends and family and it was cool to get my first win at my home track last year. But that was with last year’s car and on the long track.

“Hopefully, we can get another pole there this weekend, lead some laps and challenge for the win again.”

Both Elliott and Larson know that not only Truex but a pair of his Joe Gibbs Racing teammates – two-time Sonoma winner Kyle Busch and Denny Hamlin – will be stiff competition this week in particular. Busch, driver of the No. 18 JGR Toyota, is getting a few laps under his belt running in the NASCAR Camping World Truck Series race at Sonoma on Saturday. He is ranked second to Elliott in the championship, only nine points back, and leads the NASCAR Cup Series with 11 top 10 finishes on the season.

Hamlin, driver of the No. 11 JGR Toyota, is coming off a win two weeks ago at Charlotte that made him one of only four multi-race winners this season. His best finish at Sonoma is runner-up to NASCAR Hall of Famer Tony Stewart in 2016 and he carries a streak of five top-10 finishes at the track into the weekend – having led laps in each of those races.

Another former Sonoma winner, Stewart-Haas Racing’s Kevin Harvick could use a road course boost this weekend. He is looking for his first win since 2020 and after a 33rd place at Gateway last weekend, he has fallen outside the Playoff-eligible top-16 in points.

With much anticipation the NASCAR Camping World Truck Series returns to the Sonoma Raceway road course for the first time since Boris Said raised a trophy in California wine country back in 1998.

The fulltime truck series drivers are excited about the opportunity and there’s a large group of NASCAR Cup Series regulars entered in Saturday’s DoorDash 250 too, hoping to get some extra miles in to prepare for Sunday’s NASCAR Cup Series race.

It’s essentially a “home race” for three-time 2022 winner Zane Smith. The California native won the series’ only other road course race this year at Austin, Texas. And his nine top-10 finishes in the No. 38 Front Row Motorsports Ford through the opening 11 races is tops among the title contenders.

And he shows up this week energized by a solid NASCAR Cup Series debut last week in Gateway – where he finished 17th after starting 32nd in the No. 17 RFK Racing Ford, filling in for Chris Buescher who was out with COVID-19.

Smith can certainly expect tough competition from Rhodes who also has a road course win (Daytona Road Course, 2021) and is hoping to regain his title form after an up-and-down last month that includes three top-10s but also two finishes of 25th-place or worse in the No. 99 ThorSport Racing Toyota.

Nemechek, who trails Rhodes by 22 points in the championship, is also a former road course winner, taking a trophy in Bowmanville, Canada back in 2016. He has five other top-five road course finishes including three runner-up showings – the most recent at Austin this Spring. The driver of the No. 4 Kyle Busch Motorsports Toyota had a streak of seven top-10 finishes before an uncharacteristic crash/DNF at Gateway last week.

Chandler Smith comes into the summer stretch with some positive momentum. The driver of the No. 18 KBM Toyota has top 10 finishes in the last four races and led 40 laps last week at Gateway. He finished fifth at Austin in his only road course race in the series.

This weekend will be a new challenge for the current fulltime championship drivers who will be contending for the trophy with a larger-than-normal group of NASCAR Cup Series drivers. 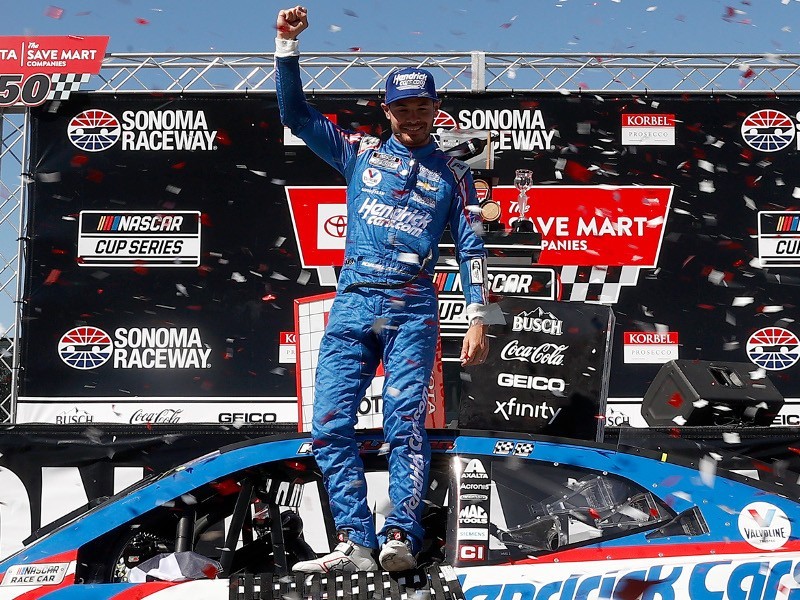