Despite a Resolution of No Confidence adopted by the faculty of Piedmont University calling for a new president, the trustees of the institution apparently do not agree.

At least that’s the message conveyed in a letter from Board of Trustees Chairman Gus Arrendale III on Wednesday defending Dr. James Mellichamp's leadership.

“I have received the results of your Monday, May 9, 2022, faculty meeting and am deeply troubled by the issues contained in your Resolution of No Confidence,” that letter states. “There are clearly numerous opportunities to improve faculty-administration relations. On behalf of the entire Board of Trustees, I assure you that addressing your concerns and building a stronger faculty-administration partnership will be the primary focus of leaders throughout the university for the future.

“Regarding the call for a new president, the Board of Trustees respectfully, but decidedly, disagrees,” Arrendale’s letter states. “Piedmont University has thrived during President Mellichamp’s decade of leadership.”

Arrendale’s letter lists about a half-dozen accomplishments during Mellichamp’s time as president.

“… suffice it to say, the Board has complete confidence in President Mellichamp’s ability to continue leading this institution forward for years to come,” Arrendale’s letter states.

Mellichamp is Piedmont’s 13th president, serving in that capacity since 2012. Prior to that, his began work as a member of the music faculty in 1982 and has held positions as Dean of the School of Arts & Sciences, Vice President for Academic Affairs, and Provost. 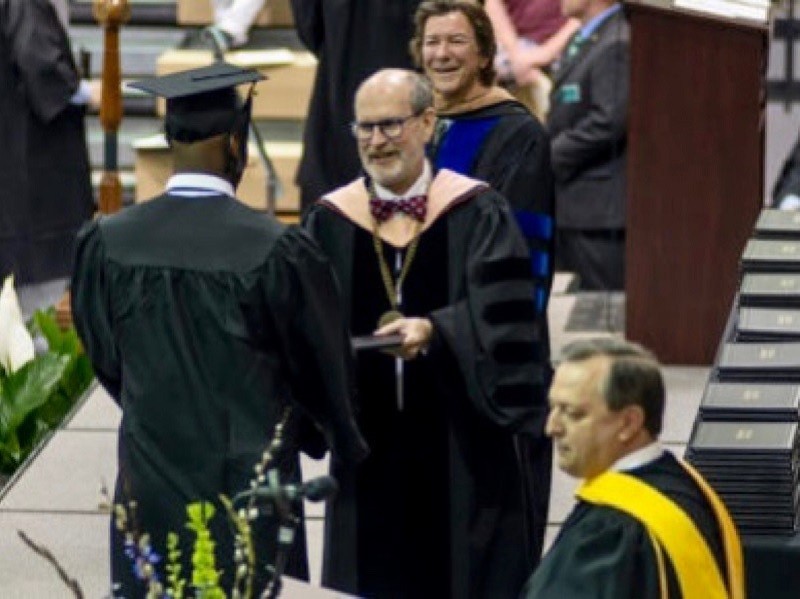 Piedmont University President Dr. James Mellichamp, second from left, is under fire from the institution's faculty, but Board of Trustees Chairman Gus Arrendale, behind Mellichamp in photo, says the Trustees support him.