Baseball playoffs: Trojans hold on to sweep Harlem; Class 3A semifinals up next

The Trojans completed the sweep of Harlem on the road on Tuesday with a nerve-racking 3-2 win to clinch the best of three series. Not only did they take the series, but are now headed to the semifinals, which will be on the road by way of the Georgia High School Association's coin toss to determine the home team when like seeds play. For the second straight time, the coin did not land in the Trojans' favor.

The Trojans will play the winner of the Pike County-Greater Atlanta Christian series. The two split on Tuesday and will play the decisive Game 3 on Wednesday.

Regardless, North Hall continues to ride solid pitching, stingy defense and big-time hitting deeper into the Class 3A playoffs.

North Hall's Jace Bowen drove in two runs and Hunter Brooks pitched a gem en route to the 3-2 win in Game 2 of the Class 3A quarterfinals to sweep Harlem on Tuesday.

Hunter Brooks was tough to hit as the right-hander held the Bulldogs to just two runs on three hits in the complete-game performance.

Although none of the runs were scored on a base hit, Tate Brooks, who singled to start the inning, scored on an error by the catch. Bowen then knocked a deep fly ball to left field that scored Ajay Jones, who also singled in the inning, to go up 2-0 after one inning of play.

Harlem, however, didn't give in, answering in the top of the second with two runs to tie the game, 2-2.

Bowen struck again in the third, again driving a run home -- Tate Brooks -- on a sacrifice fly to left field.

Hunter Brooks allowed one hit over the next four innings behind solid defensive play.

Jaret Bales had himself what's become a normal day at the ball field.

The senior slugger drove in four runs, blasted two home runs and added another single in four plate appearances to lead North Hall's comeback 7-4 win in Game 1 of the Class 3A quarterfinals on the road.

He also pitched 6 2/3 innings, giving up four runs on three hits while striking out seven.

But it wasn't all roses and sunshine for the Trojans (31-5), as they found themselves in a hole after going up 1-0 in their first at-bat of the day.

Harlem (27-7) rallied back with a three-run second inning that saw very uncharacteristic pitching from Bales, who had four of his game-high 10 walks in the inning, although one was an intentional walk. The defense also posted an error in the inning.

The Bulldogs scored one run on a double and the other two were walked in after the bases were loaded.

But Bales redeemed himself in the top of the third inning with a two-run shot to left field that scored Jace Bowen to tie the game, 3-3.

After that, it was all Trojans. Hudson Barrett smacked a two-RBI single that got Hunter Brooks and Luke Erickson home for a 5-3 lead. Brooks and Erickson started the inning with back-to-back singles.

And in the fifth, Bales struck again, popping his second home run of the game on a line drive to left field. Meanwhile, Bradford Puryear followed up the bomb with a double to left field, and Erickson, who was 2-for-3 with an RBI on the day, crushed a double to centerfield, driving Puryear home for a 7-3 win in the same inning.

Harlem added one more run on a home run from E Burnett in the bottom of the fifth.

Game 2 is already underway. If the Trojans get the win in Game 2, they'll be headed back to the semifinals next week. 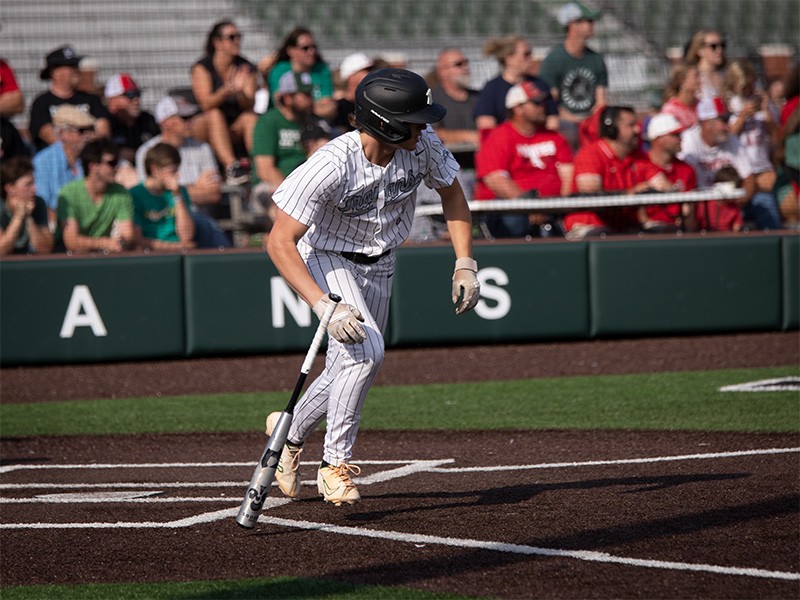 Jaret Bales crushed two home runs and drove in four runs in North Hall's 7-4 win in Game 1 of the Class 3A quarterfinals in Harlem on Tuesday.