MIAMI GARDENS, Fla. (AP) — His first day racing around the new Formula One circuit in Miami was absolutely horrible. Then he made a mistake in qualifying that cost him a spot on the front row.

By the time race day rolled around, Max Verstappen had knocked it all out of his system.

Verstappen was explosive at the start Sunday and used a pair of aggressive passes to get past Ferrari and current championship leader Charles Leclerc. Once out front, the reigning world champion controlled the inaugural Miami Grand Prix for his third win in five races to start the season.

“We still have a few issues we have to solve,” Verstappen said. “I mean, we are quick, but my Friday was terrible, which is not great. But there's a lot of potential.”

The 23rd win of the Dutchman's career sliced eight points off Leclerc's lead in the standings. Verstappen now trails him by 19 points headed into the Spanish Grand Prix in two weeks. He celebrated on the podium with Hall of Fame quarterback Dan Marino, who represented the host Miami Dolphins in presenting Verstappen with his winning trophy and an official helmet.

Verstappen started third after Ferrari locked up the front row with Leclerc and Carlos Sainz, Jr. in qualifying. But in the end, Red Bull got the best of its new rival for a second consecutive race.

Verstappen pounced at the start to get ahead of Sainz, then set his sights on Leclerc and used a strong outside pass on the ninth lap to claim the lead.

Leclerc said the tires on his Ferrari struggled on a hot South Florida day in which temperatures reached 90 degrees despite brief intermittent showers.

“We struggled a little bit after five, six laps with the front tires, and then we struggled and basically lost the race in that stage,” Leclerc said. “Losing the lead and then losing quite a bit of race time because of the degradation, we need to look at that and be on top of it for the next race.”

Verstappen went unchallenged until a late crash between Lando Norris and Pierre Gasly brought out the safety car and setup a 10-lap sprint to the finish on the 19-turn, 3.36-mile circuit (5.41 kilometers) built around Hard Rock Stadium.

Leclerc got a few looks inside in the closing laps but Verstappen didn't relent and won by 3.7 seconds.

“I think we were very competitive or at least as competitive as Max," Leclerc said. "And after the safety car, I really felt that we had a shot to actually take back the lead.”

Verstappen also won two weeks ago at Imola as Red Bull capitalized on a poor Ferrari weekend on Italian home soil with a 1-2 finish for Verstappen and Sergio Perez.

In Miami, Ferrari settled for second and third for Leclerc and Sainz, while Perez was fourth. After the race, Perex said he's started talks on a new contract with Red Bull but neither side is in a hurry to complete a deal.

Mercedes showed much improvement with fifth- and sixth-place finishes for George Russell and Lewis Hamilton. It's the fourth time in five races that first-year Mercedes driver Russell has beaten the seven-time champion.

The race itself wasn't the thriller the 85,000 in attendance Sunday breathlessly expected when they snagged one of the hottest tickets in sports. Promoters never had a general ticket sale because of crushing early demand and the campus surrounding Hard Rock Stadium was the place to party over the last three days.

Whether it was at the man-made beach club where musical acts have entertained since Friday or the “marina” that docked 10 boats on plywood covered in a decal to resemble rippling water, F1 got the sun, sand and Miami backdrop it wanted when it agreed to this 10-year deal.

Come race day, the celebrities were out in full force. Dwyane Wade took selfies on the starting grid and Paris Hilton danced in front of the McLaren garage; Tom Brady, David Beckham and Michael Jordan posed for a pre-race picture with Lewis Hamilton, who hosted former first lady Michelle Obama on Saturday at the track. Serena Williams ducked into Mercedes' hospitality and Puerto Rican rapper Bad Bunny arrived at the venue with Perez and spent most of pre-race at Red Bull with the Mexican driver.

The Miami event gives the U.S. two F1 races in one season for the first time since 1984. F1 will add Las Vegas as a third American race in 2023.

It was a strange event for Haas F1, the only American team on the 20-car grid. The team split its strategy between Kevin Magnussen and Mick Schumacher following the late safety car and Schumacher was in position to score the first points of his career and give Haas its best finish in the United States.

But Schumacher inexplicably ran into Sebastian Vettel to end his breakout day. He finished 15th and Magnussen retired one lap from the end.

“It was the hardest race I’ve ever done, it was unbelievably hot," Magnussen said.

Schumacher said he was “gutted” he didn't finish inside the top 10.

“I think it was our best race so far this year,” he said. "We were on the road to getting points, but we’ll have to wait some more.” 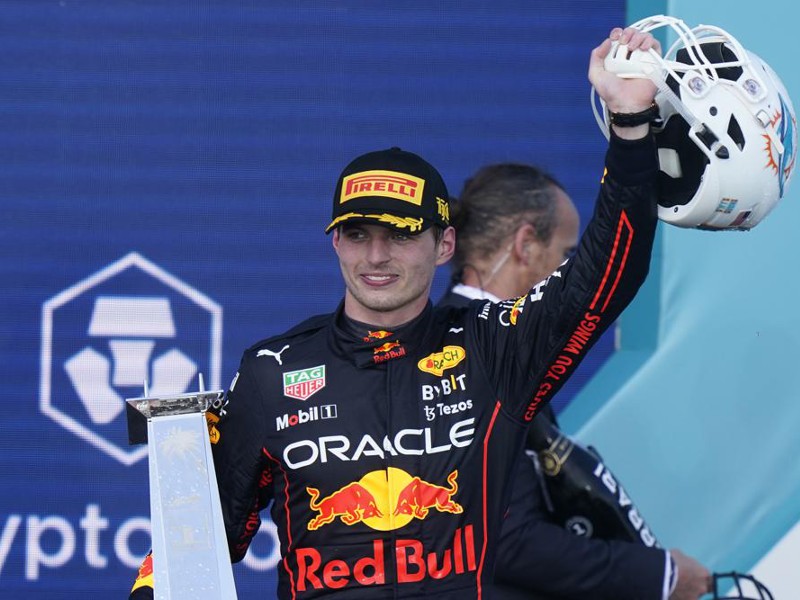 Red Bull driver Max Verstappen of the Netherlands, winner of the Formula One Miami Grand Prix auto race, holds his trophy and a Miami Dolphins' helmet at the Miami International Autodrome, Sunday, May 8, 2022, in Miami Gardens, Fla. (AP Photo/Lynne Sladky) 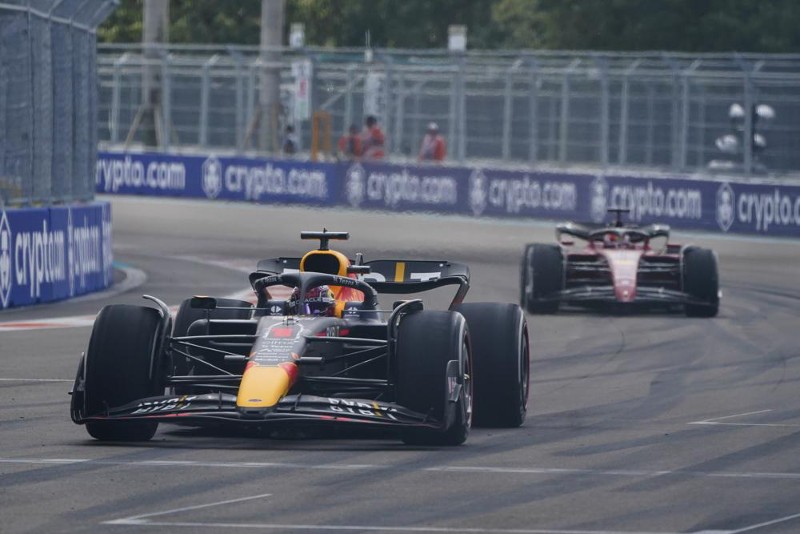