'Trying to get back up'; Gainesville’s homeless fight the cold

As temperatures drop, Gainesville’s homeless population wrap up to fight against the cold.

Shinard Cook is a homeless man living on the streets of Gainesville. Most of the people he sees on a daily basis call him “Ashton” for short. It's November 17 and he’s upbeat, smiling, waiting in line for a shower at the Good News at Noon homeless shelter on Davis Street. It will be an hour or two before his name is next on the list. In the meantime, lunch is approaching as he warms up in the lobby of the shelter.

Cook spent the previous night in an abandoned house. He said it was most likely trespassing, but when the homeless shelter fills up and the temperatures drop below freezing, it becomes a survival decision—act first and hope for forgiveness and understanding later.

“It's been times where I've went to places, you know what I'm saying, that have been kind of abandoned,” Cook said. “Even if I knew I wasn't supposed to be there, if I leave, I will take that initiative to try to clean up what I did, as far as trash, eating. And I take the risk if I was caught here, but it's cold, I can't get in the shelter because they're packed or full or some kind of requirement for you to pay, you know, and I don't have the money to pay, or two forms of identification.”

Cook wears a navy blue jacket on top of a hoodie and several other layers of shirts. He said he found the jacket at the local skatepark. Some of his other cold-weather gear was obtained from the clothing stock donated to the homeless shelter where they have beanies, scarves, coats, boots and gloves in limited supply.

The frigid winter air forces many homeless to take shelter wherever they can. This often leads them into decaying homes where bacteria and germs reside. Cook said toting some form of sanitizer is crucial.

“If I came from an abandoned house that has been around for years, and you know, everything decaying, probably rodent infested,” Cook said. “I come in and try to take a shower—10 o'clock in the morning you got 15, 16 people on the list. Okay, you know, 10 to 15 of those people come in, and they go in the shower with what they brought off the street. And it's left in the shower.”

Wearing layers is one of the most important tactics the homeless use to stay warm. Many say that maintaining a good pair of shoes is also critical. While boots can provide a huge benefit, steel-toed boots are off limits due to their weight and inability to keep the toes warm.

“Every winter, up until this one, we've provided some type of emergency shelter,” Gossage said. “Some years, it was just men. This past year, we did men and women. But it's just—it's such a hard thing. Because first of all, we don't really have that many brutally cold nights, but we certainly have some, and it's usually just out of the blue. So preparing for it and having enough space on hand for those nights is just—it's a daunting task.”

Gossage said he’s spoken with community members and currently there is nothing in the works for an emergency shelter option on dangerously cold nights. Good News at Noon provides lunch and dinner for the homeless every day at 12:00 p.m. and 7:00 p.m. They also accept donations of any in-season clothing, which is one major way they are able to help the homeless throughout the winter. When they fill a coat rack up, it is usually empty by the end of the week.

Some homeless people have come up with other ways to fight the cold. Sidney Davis said he has opted to work the night shift at his new job, which provides him shelter during the coldest parts of the night. He’s then able to sleep during the day.

“It makes me just wanna give up, really,” Davis said. “Drugs didn't get me out here, I just lost my [previous] job and ran out of money and I stayed at a motel. So here I am. Now I'm trying to get back up—it's hard when you get kicked in the face.”

Davis said he sleeps in a tent not far from the homeless shelter, but was kicked off the site earlier that morning by police. He sleeps in all his clothes, shoes included, and often wraps his tent in a tarp which helps contain his body heat. Davis said it’s not warm, but it’s better than freezing.

Another homeless man, Victor Ledford, said that layering up is the only way to make it. The problem is being on the move so much makes it difficult to carry extra gear around. Ledford’s hip went out on him, further complicating his situation. The shelter’s PITCH (Paramedics in the Communities Health) doctor escorted Ledford for him to undergo surgery.

Paramedic Ryan Hayden is an operator with PITCH and said their role is to fill the gaps between emergency services and doctors at the hospital. He helps the homeless get registered at the Good News at Noon Clinic and performs various medical procedures and administers medications as needed.

Gainesville locals Charlie and Mindy Johnson toured the Good News at Noon shelter as prospective volunteers. Being briefly homeless themselves, they felt the need to give back to the community. Charlie Johnson said many of us have more we can donate than we might think.

“I opened my closet door today, knowing that we were coming down here, and I grabbed my jacket because it's cold out,” he said. “And I see my eight other jackets that I don't ever wear, so I couldn't help but grab a couple of them … and we’ll give them away before we leave.”

Temperatures are likely to continue on a downward trend as we move further into the winter season. Having the right clothing remains as the primary way the homeless are able to endure the harsh conditions. If you are interested in donating any winter clothing, stop by the Good News at Noon location on David Street in Gainesville. There are many who would greatly appreciate it, and even some whose survival depends on it. 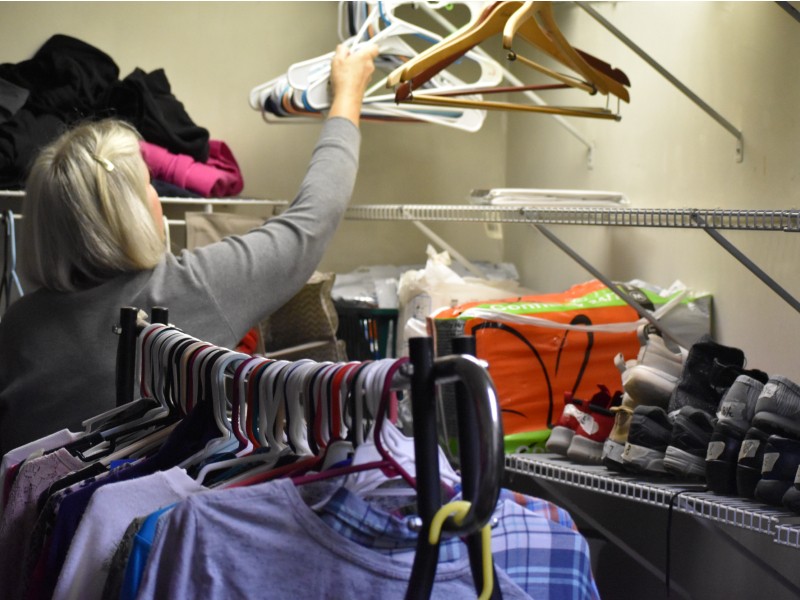 A Good News at Noon employee organizes the stock of winter clothing for use by the homeless. 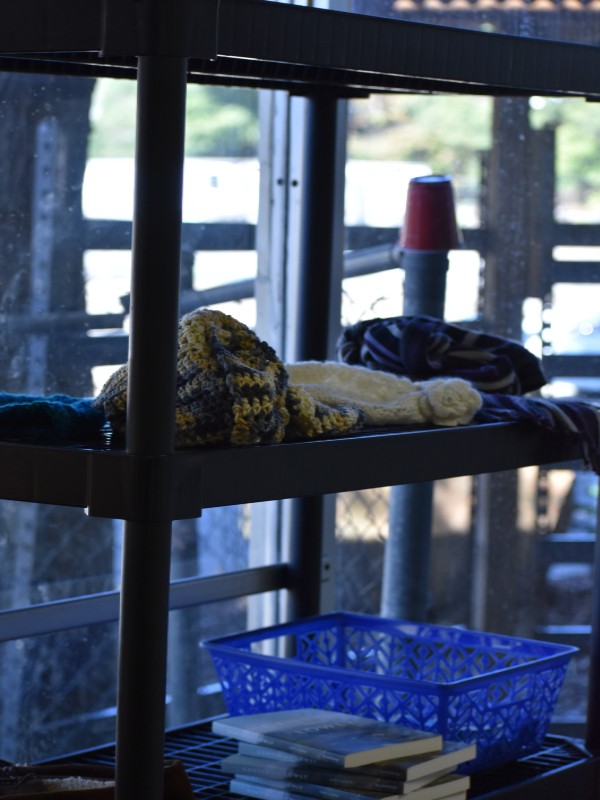 A shelf sits in the lobby at Good News at Noon with beanies, scarves and other various items available for the homeless to take. 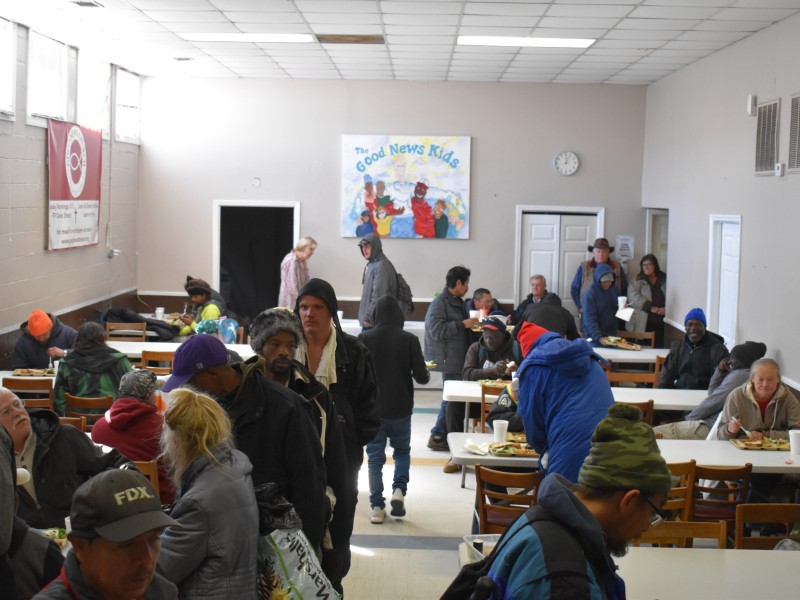 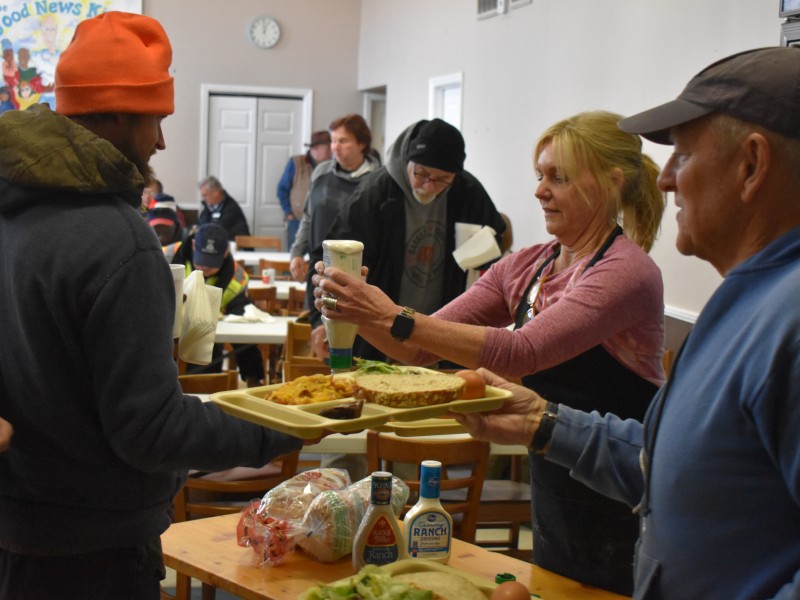 Homeless people are served lunch at Good News at Noon on November 17. 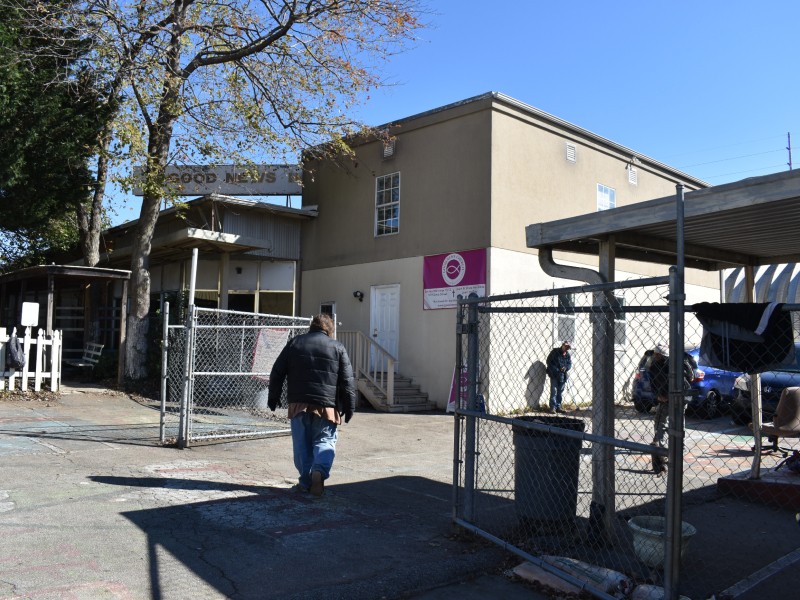 Homeless people head into Good News at Noon on Davis Street in Gainesville for lunch.