GAINESVILLE — Chestatee snapped a three-game losing streak to Flowery Branch going back to last season with a 53-40 win at the Lynn Cottrell gym in Region 8-4A action Tuesday night.

Flowery Branch (7-10, 3-4 Region 8-4A) suffered its second straight loss and fell into fifth place in the standings. Chestatee took over fourth place all alone with the victory.

The Lady War Eagles led just 13-10 after the first quarter and took a 27-22 lead into halftime. Branch cut into the third trailing just 39-35 heading into the fourth.

Chestatee held Branch to 5 fourth-quarter points to pull away for the win.

The Lady Vikings could not keep their win streak going, falling to the Lady Jaguars at home in a Region 8-4A battle.

East Hall next will travel to Flowery Branch on Friday in a region contest.

Peachtree Academy hit a shot at the buzzer to give the Lady Panthers a thrilling region win at home on Tuesday night.

LCA (7-11, 1-3 in the Region II-A GAPPS) came out sluggish, and Peachtree Academy made them pay. Peachtree took advantage and eventually took a nine-point lead into halftime.

But LCA mounted a second-half comeback. Junior Camille Hoffman hit back-to-back 3-pointers to jumpstart the comeback effort.  With 22 seconds left, Ashley Avery drained a 3-pointer to tie the game at 31.

The Lady Lightning were led by Hoffman’s 13 points and 6 rebounds. Avery had 10 points and 9 rebounds.

The sixth-ranked Lady Wolverines (14-4, 5-2 Region 6-7A) built its lead slowly but finished with a flurry in the blowout win over Gainesville (8-10, 1-6 Region 6-7A) on Tuesday at home. After a sluggish first quarter start, West Forsyth, behind Molly Quincy, took control in the second quarter with a 15-1 run to end the first half up 36-15.

By the middle of the third quarter, West Forsyth was up 55-27, ending with a 62-35 advantage. In the fourth, the Lady Wolverines 17-4 spurt to finish the game. 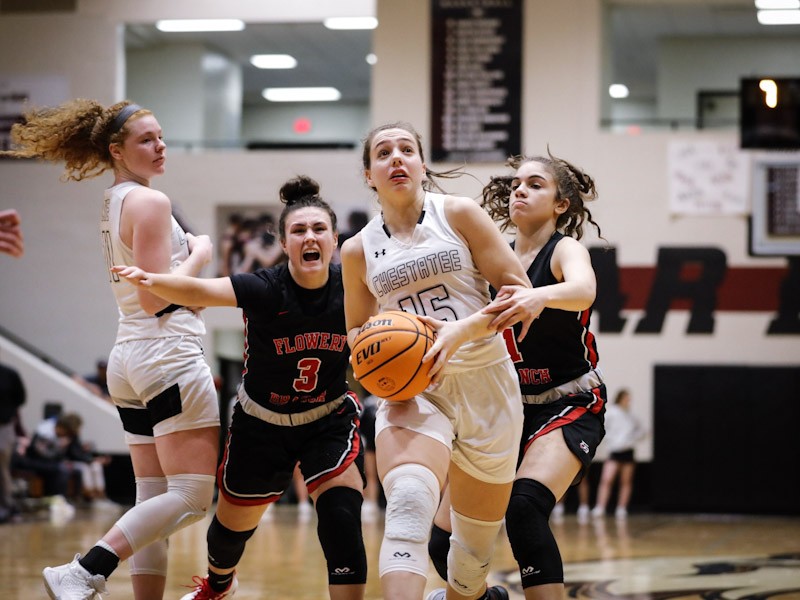