FLOWERY BRANCH, Ga. — After the first quarter, North Hall's defense went to work en route to a 73-55 win on the road Friday.

Robert Terry was key in the offensive surge as he scored 16 points in the second and third quarters. He had a game-high 27 points. Sam Gailey added 15 for the Trojans.

Carlos Marlow, who was a perfect 12-of-12 from the foul line, was the high scorer for the Bears with 18 points.

The win keeps the Dragons one game ahead of Madison County in the standings. Madison knocked off East Hall, 57-45, to remain in second place. Jefferson travels to Madison County on Tuesday.

The Spartans (5-12, 2-6 Region 7-3A) could not hold a halftime lead in a tough loss to the Bobcats on Friday night in region play.

West Hall was led by Owen Jenkins with 19 points. Xavier Felix added 17 points and Stephen Clark had 7 points for the Spartans.

Gilmer was paced by 17 points from Lewis Mulkey. Ethan Banks had 11 points for the Bobcats.

The Wildcats (13-5) cut Rabun Gap's lead to five points with less than 3 minutes and missed three good looks on consecutive trips down the floor in the non-region loss to Rabun Gap on Friday at home.

The Knights struggled in two quarters in the loss to Jackson County on Friday.

Johnson was outscored 14-8 in the first and 15-8 in the third. In the second and fourth quarters, the Knights found the rhythm on offense, losing the second by three, 18-15, and winning the fourth, 19-18.

Bryce Bracco led the Broncos with 17 points, while Davey Hyams had 16 points, Matthew Rouse with 14, and Cannon Hunter with 10 points. The win lifted the Broncos into a tie with Lumpkin County and Cherokee Bluff for fourth place in the region standings.

Niko Wilson, who was a hand full for Gainesville all night, and Tommy Morris both swished 3-pointers down late in the first half to push the Longhorns ahead, 34-15, and by the end of the half, James Tyre's 3-pointer extended the lead 41-25.

Wilson led the Longhorns with 22 points, while Tyre had 16.

The second half was much of the same as the Longhorns poured it on in the third, outscoring the Red Elephants 31-10 to take a 56-35 advantage. The 30-point lead invoked the mercy rule in the fourth quarter (6-minute quarter) as Lambert rolled to the blowout win.

The War Eagles led 24-20 at the half and 34-29 after the third. North Forsyth went on a 9-0 run in the third to cut the lead to five points but couldn't get past the War Eagles in the fourth.

Cole Kirouac led the Raiders with 12 points, 10 in the first half, and Aidan Kudlass chipped in 9. 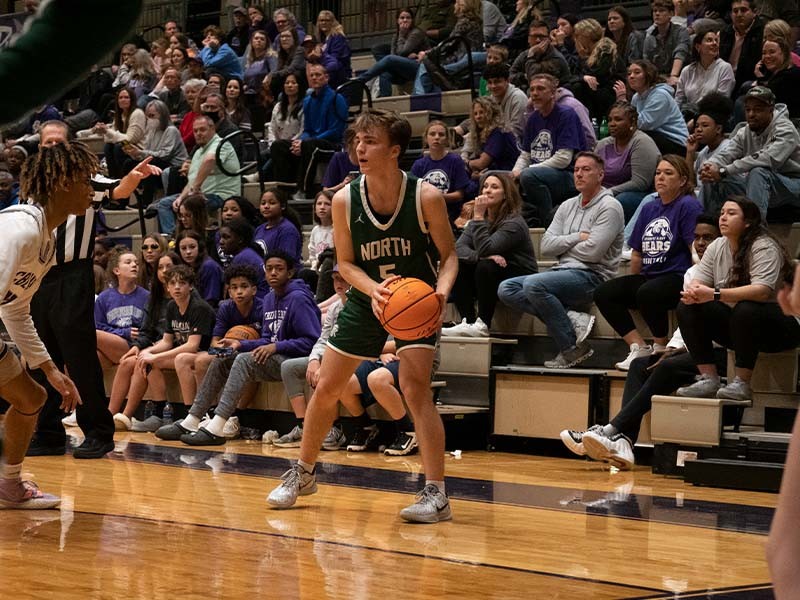