By For AccessWDUN Morgan Lee

GAINESVILLE — This morning, last night, for all time. Georgia fans and alumni, we are all Stetson Bennett.

The quarterback who so many said couldn’t, in fact did.

Bennett took a huge hand in helping the Bulldogs, his Bulldogs, OUR Bulldogs, to exorcise 41 years-worth of demons last night with a gritty performance in a 33-18 win over Alabama in the national title game in Indianapolis.

Like Georgia’s 41-year wander in the wilderness, it wasn’t always pretty. In fact, at times it was downright ugly. But, like everything else in red and black on Monday night/Tuesday morning, it was absolutely worth every moment.

And now Bulldogs around the state, the nation, heck the globe, are celebrating and beaming with a fervor that the busting of such a drought deserves. And no one encapsulated what that feels like more than the “mail” man himself.

“We’re national champs, I don’t…God!,” Bennett blurted to ESPN’s Marty Smith after the game while trying to catch up to his racing mind. And weren’t all of our minds racing in the aftermath?

The unfancied but resilient Bennett made the plays that were absolutely needed all season and again on Monday. And, despite all the doubts, it was so fitting to see someone who grew up a massive Bulldog fan leading Georgia to the promised land, as his two fourth quarter touchdowns helped the Bulldogs push past the hulking presence that is Alabama and college football’s greatest head coach in Nick Saban.

And so it was when Georgia redshirt freshman cornerback Kelee Ringo picked off a pass from much-harassed but again impressive Tide quarterback Bryce Young, Stetson – like all Bulldog faithful – could relax and celebrate. And, as he did, the emotions came flowing out of him, as it did for Dawgs fans wherever they were on Monday and Tuesday, cameras catching the walk-on crying with joy on the sideline, teammates and coaches embracing him.

“I can’t… when Kelee caught that pick, it just hit me, kind of bubbled over,” Bennett said. “Because we were prepared for...two minutes to go win the game because we were thinking they (Alabama) were going to score – actually we weren’t thinking that because guys like (Ringo) played freaking unbelievable. They kept us in it the whole first half when we were tripping over our own feet…um, I’m rambling right now, I have no idea what to say.”

There is nothing to say, only a feeling of joy and pride and ecstasy that will surely last throughout this winter and spring. As it should.

Like so many Bulldog faithful, Bennett can reflect on coming close so many times – only to see the ring pulled away as it seemed within grasp.

“I feel like tantalus. So close...” was just one text I received from a fellow long-suffering Bulldog during the early going last night. And for three-and-a-bit quarters, it seemed as if Georgia would, once again, see Alabama snuff out our hopes and dreams – that quest taking yet another detour before Bennett connected on two touchdown passes and Ringo derailed the Tide once and for all.

This may seem hyperbole to the non-Georgia fans out there. It most assuredly is not.

My earliest, fleeting memories are of my father losing his mind (in a good way) as Herschel Walker led the Bulldogs to glory in 1980. But even more real are the memories of those same Herschel-highlighted Dawgs falling short in 1981 and 82. Then there was the pain of the 1980s and 90s when Georgia clung to old glories and battled its way out of the Jan Kemp scandal (ask an old Dawg to explain it). During those oft-bleak years (bar some great single-game moments), rivals Florida and Tennessee took control of the SEC and Georgia’s own division. As the decade waned, Jim Donnan allowed Georgia fans to dare to dream again, as he led Georgia back to consistency and competency.

The 2000s brought Mark Richt, and his guidance busted Georgia’s conference drought – winning the SEC for the first time in 20 years in 2002. But even though he got the Dawgs barking loudly again, Richt had the misfortune of battling two collegiate behemoths in Urban Meyer at Florida and then Saban – first at LSU and then at Alabama where he forged college football’s gold standard of the new millenium. So, Georgia did the next best thing in hiring away his heir apparent and disciple in Kirby Smart – who had helped lead Georgia out of irrelevancy as an All-SEC player.

And yet the scars kept being re-opened.

Our red and black hearts were left “torn out and bleeding” (as beloved play-by-play legend Larry Munson might have said) during the 2018 CFP title game. Second and 26 and all that. And then it seemed, every year after, there was Alabama in the way of greatness. The immovable, cold-hearted, goliath, laughing off all of Georgia’s attempts to finally land the shot that would fell the crimson giant.

And yet the stage was set for Georgia’s perfect David.

Here came “little” Stetson Bennett IV – who by the way is by no means little, but when you’re a walk-on with no recruiting hype at a program that Smart has made all about recruiting hype, it’s hard to shake that stereotype. However, the mailman blocked it all out and did something few saw as probable – as even the most ardent of Dawgs will admit in their reddest and blackest of hearts – taking over the starting job after injuries derailed touted erstwhile starter JT Daniels. After a strong but, ultimately, disappointing 2020 season that also saw Bennett improbably win the starting job, few outside of the Georgia locker room believed the former walk-on was the man for the moment, despite an impressive 2021 regular season and Orange Bowl performance.

It was. In fact, it was everything that he – and we – needed.

“Bet on yourself. Some of the most successful people that I know, they just bet on themselves. They weren’t given what they had. You just work hard, keep your mouth shut, focus on the duty that lies nearest, execute and good things happen. And sometimes they don’t happen, but you just work for things like this,” Bennett said.

We love them for it. And, like Bennett, we all let our emotions flow on Monday night.

Let it go mailman; let it flow. You’ve earned it. For all of us. And for Dawgs fans – to paraphrase another Georgia legend – this one too is forever. 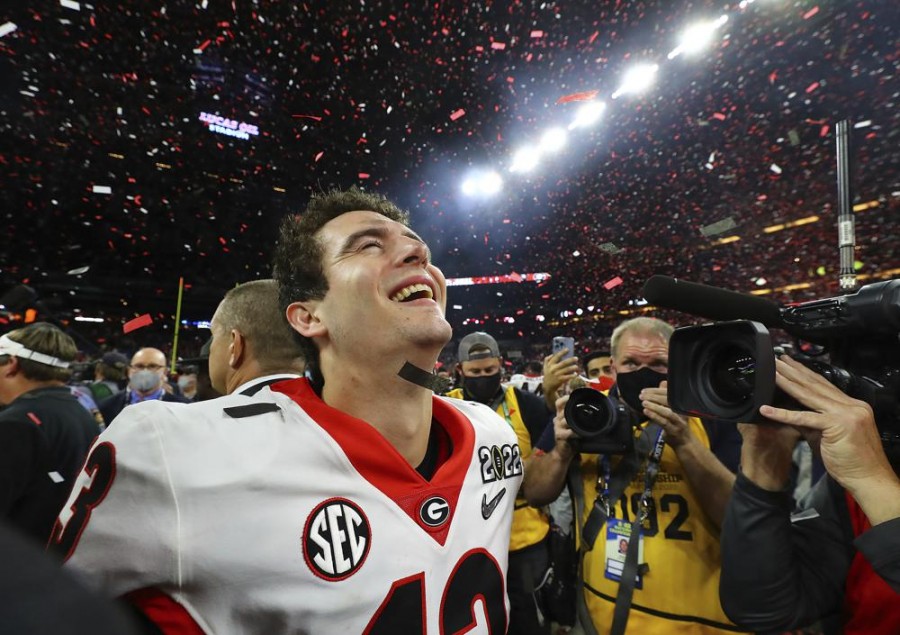