Retired educator Helen M. Martin has loved history for as long as she can remember, so it seemed natural for her to take up the mantle of publishing the stories of the homes on Gainesville's historic Green Street.

Martin, who actually grew up on a farm in the Sardis community in Northwest Hall County, never lived in any of the grand homes on Green Street, but she was a frequent visitor. Those visits, combined with the last four years spent in intense research, gave rise to her book Beyond the Jewels and Grandeur: The Houses on North Green Street.

Martin calls her book "an architectural history" and while she has included in-depth details about layout, design and architectural features of the homes, she's also shared the heart and soul of the buildings that line Gainesville's most well-known street.

"I included every house from the First Methodist Church [a building currently owned by The Arts Council, Inc.] to the First Baptist Church - and there are about 40 of them," Martin said.

Plus, she offers information on some of the more than two dozen homes that were either replaced with more modern buildings or were moved prior to Green Street's designation as a historic district in the mid 1970s.

"Progress has to occur, but I felt like until 1975, when the houses were put on the national registry [National Register of Historic Places], the wrecking ball just went crazy," Martin said.

Martin speaks with affection about the homes, almost as if she's talking about some of the children she taught during her 40 years as an educator. They all are treasures, she said, but her favorite is what she calls the Martin-Matthews-Norton House at 393 Green Street, a Tudor-style home located next to The Gainesville Times building.

"My favorite house is this one because my uncle built the house," Martin said. "I love Tudor detailing...but on the inside it doesn't have Tudor detailing." That's because John Harrison Martin built what Helen Martin described as a farm-country house, and the next owner, J.D. Matthews, changed the style completely in the 1930s, bricking it over and adding the Tudor details. At one time, the Norton Agency had its insurance and real estate offices in the home.

The descriptions of the other homes flow fast and furious as she talks about them.

"I love the Pruitt House, too - the Pruitt-Wheeler House - they're renovating it, and I'm so pleased...Henrietta Estes, who lived in what they called the 'gingerbread house,' was one of my dear friends...going to her house was like going to a candy shop...there's so much history in this - I think everybody will love this book."

Rev. Mike Taylor is the pastor at Gainesville's Central Baptist Church, where Martin has been a member for 50-plus years. He has watched as Helen Martin poured herself into the Green Street book project. Taylor said Martin loves her community and that made her perfectly suited to write a book about one of the most treasured features in the city of Gainesville.

"Her insight into history stems from her love of people and the value of people," Taylor said. "What Helen's done is attribute value to these various, different people who have lived through time and she's managed to - like a snapshot - capture the fact that these are families and individuals who have poured themselves into our community...we're the benefactors of the people who have come before us."

He said he can't wait to see Gainesville enjoy the finished product.

"I'm excited about the book because finally everything that she's been running around doing with this information between her ears and in her heart now hits print," Taylor said.

Taylor said Martin has a focus that has enabled her to tackle other historic projects with the same zeal as she has her book. She spearheaded the effort to establish a history room at Central Baptist, a church founded more than 130 years ago. She's also working on cataloguing and telling the stories of the 56 stained glass windows at the church. There's also a children's book in the works about the history of Gainesville.

For now, Martin is anxiously awaiting the arrival of the first copies of Beyond the Jewels and Grandeur, and once they are shipped, she will announce a book signing - at a location on Green Street, of course. 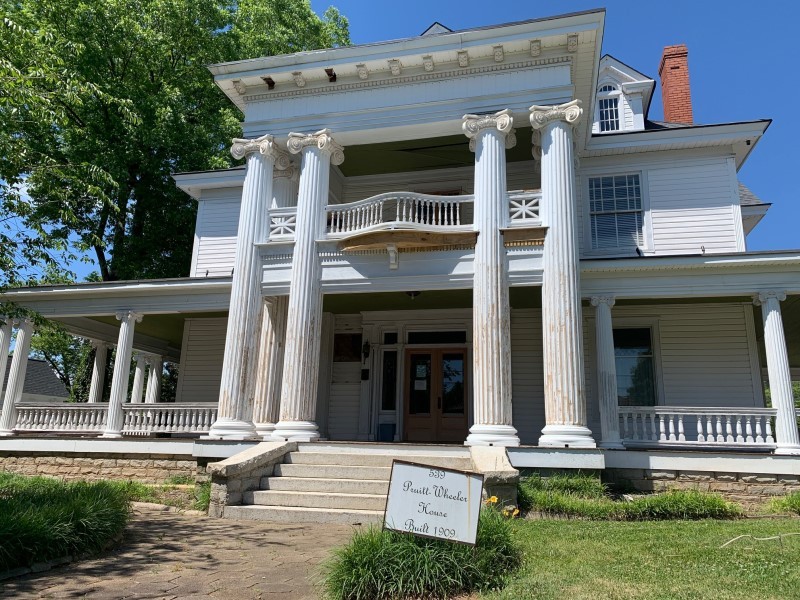 The Pruitt-Wheeler House, which was built in 1909, is currently undergoing renovation. (Photo: B.J. Williams) 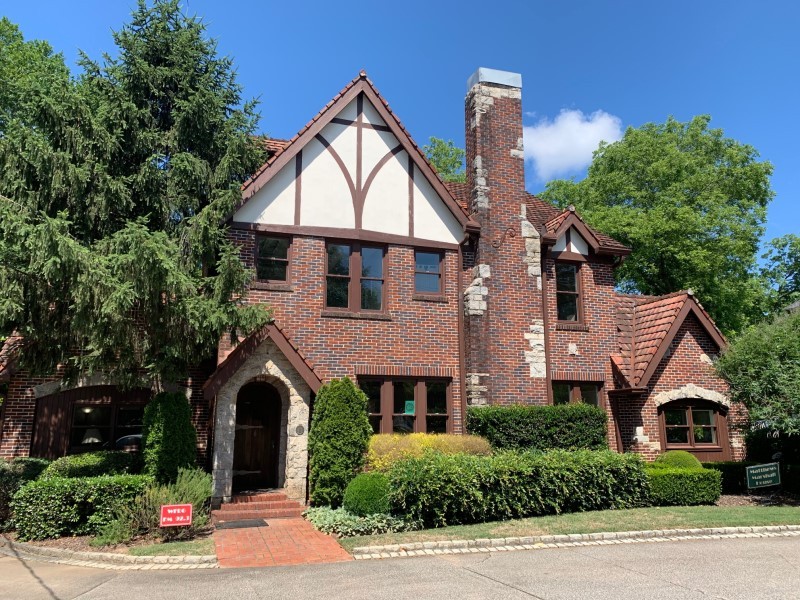 The Tudor-style house built by Helen Martin's uncle looked much different when it was first built. The brick was added years after initial construction. (Photo: B.J. Williams) 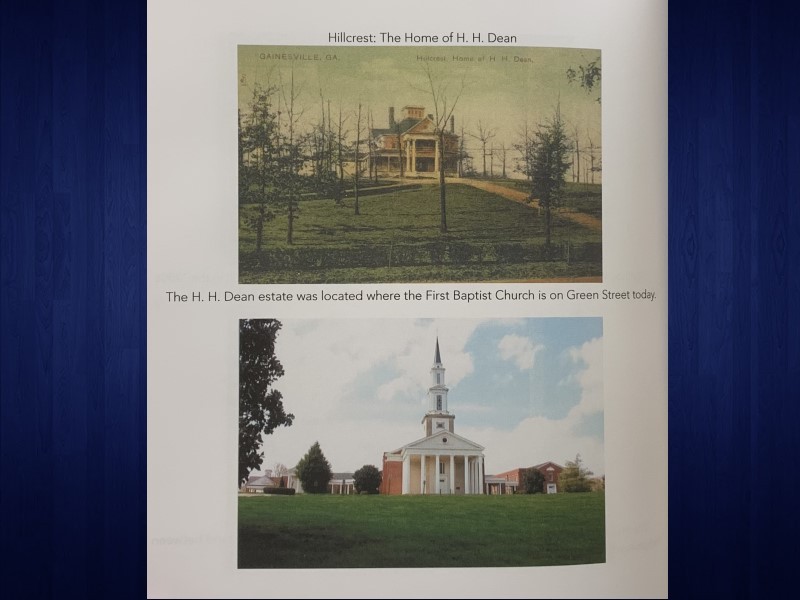 Hillcrest, the estate of H.H. Dean, was one of more than two dozen homes torn down or moved along North Green Street. First Baptist Church now sits on the site of the Dean estate. (Photo from Beyond the Jewels and Grandeur: The Houses on North Green Street) 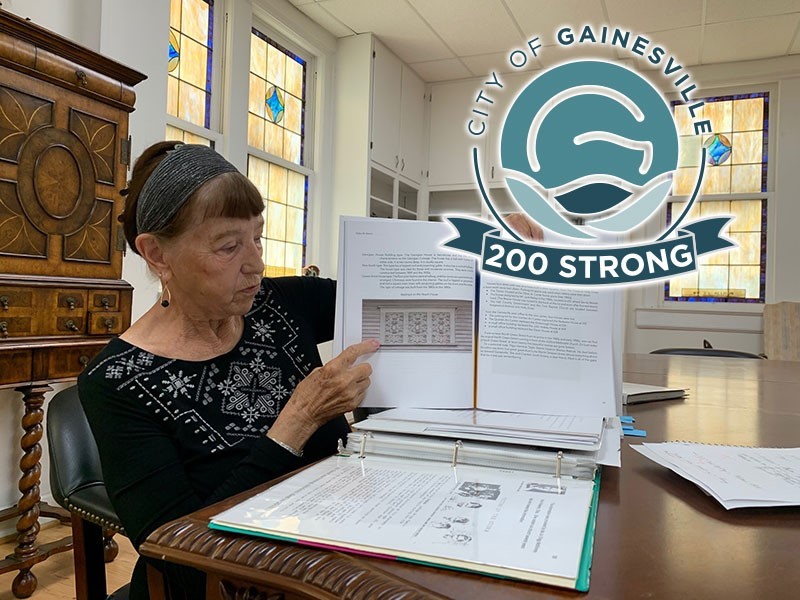 Helen M. Martin, retired educator and local historian, shares some of the features of her book Beyond the Jewels and Grandeur: The Houses on North Green Street. Here she shows the page featuring the decorative applique that adorns the Hosch House. (Photo: B.J. Williams)