With a remarkable run from the back of the field in the final stage at Mid-Ohio Sports Car Course, A.J. Allmendinger charged to an overtime victory in Saturday’s B&L Transport 170 and tied Marcos Ambrose for the most NASCAR Xfinity Series road course wins all-time.

The triumph at the home track of team owner Matt Kaulig was the fifth in the series on a road course for Allmendinger, the first two-time winner at the technical 2.258-mile, 13-turn circuit. Allmendinger went to Victory Lane in the inaugural event at the Lexington, Ohio, track in 2013.

After suffering a rear-of-the-field penalty for not taking the required 50 seconds on pit road under modified pit road rules, Allmendinger restarted 19th on lap 56 of a scheduled 75 and quickly began working his way through the field.

When teammate Jeb Burton slid into a gravel trap off turn 4 on lap 68 to cause the sixth caution of the race, Allmendinger had climbed to third and took full advantage of a restart on lap 72, diving to the inside and taking race leader and reigning series champion Austin Cindric and second-place Ty Gibbs three-wide in the first corner.

Allmendinger survived contact with Gibbs’ Toyota and came out of the corner with the lead, but Cindric pin-balled off the cars of Gibbs and Michael Annett and spun through the grass, ending his winning chances.

After a seventh caution for a wreck involving Kris Wright, Alex Labbe and Kyle Weatherman, Allmendinger pulled away from Kaulig Racing teammate Justin Haley to win by .809 seconds. Haley nursed a car with right-front damage to the runner-up finish, one spot ahead of Gibbs.

“I’m not going to lie, I was a little upset,” Allmendinger said of the penalty. “But we win and lose as a team, so I was going to fight until the checkered flag flew. I knew we had the best car …

“I was shocked that Cindric took the outside (on the restart) … I know these guys would do it to me, so I was barreling in there when I saw a gap, and I was going to come out on the other side clean.”

Indianapolis 500 winning car owner Michael Shank, who fielded the team with which Allmendinger won the 50th running of the Rolex 24 Hours of Daytona in 2012, was watching from the pits and predicted his good friend would recover from the penalty.

“He came here to see me,” said Allmendinger, who won for the second time this season and the seventh time in his career. “How lucky am I? I love Shank. And this is Matt Kaulig’s Super Bowl … It’s just such a big deal. I always want to win for him, but here, I put a lot more pressure on myself to try to win.”

Gibbs, for one, wasn’t happy with Allmendinger’s move to the inside on the decisive restart.

“The 16 (Allmendinger) did us a little dirty there,” said Gibbs, who nevertheless collected his sixth top five (including two wins) in his seventh Xfinity Series start. “I feel like there is a point, you know … we are racing in Xfinity cars at road courses. It’s always going to be rough, but he took it to the next level.

“I guess I was a little torpedoed. I got the 22 (Cindric), knocked him out, but, yeah, I didn’t really have anywhere to go. That’s just part of it — part of the end of these races. Things get rough.”

In addition to finishing 1-2, Allmendinger and Haley won Stages 1 and 2, respectively. Allmendinger increased his Playoff point total to 13, seven behind Cindric’s series-leading 20. 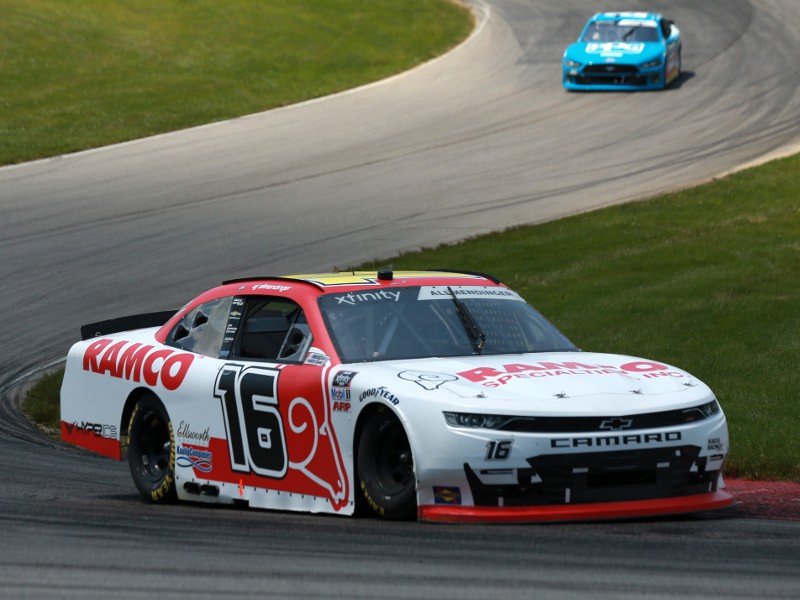 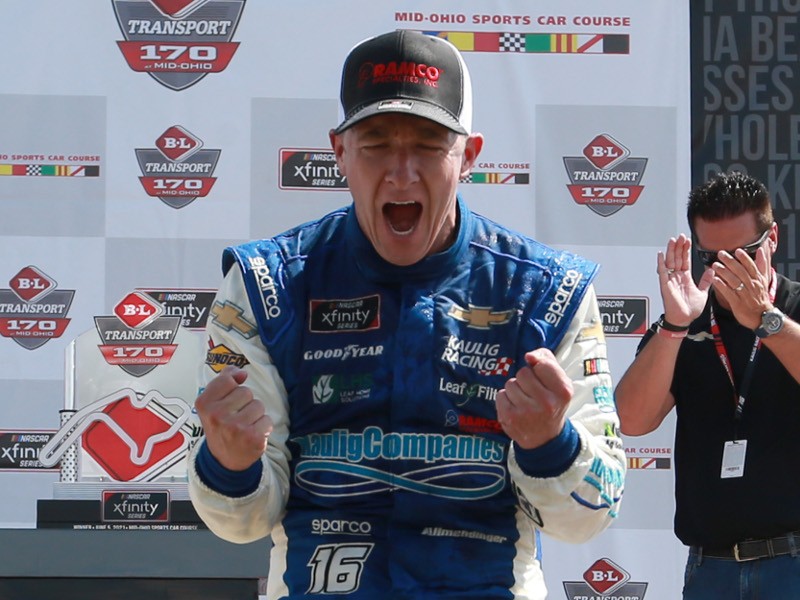