D’Arnaud was placed on the 60-day IL with a torn ligament in his left thumb after getting hurt on a tag play at the plate in the sixth inning of Saturday night's game against Toronto.

Atlanta manager Brian Snitker said after the Braves lost 7-2 to Toronto that d’Arnaud is being set for surgery sometime in the next few days.

Snitker expects d’Arnaud to return before the season ends.

Jackson, who replaced d’Arnaud in the game, went on the 10-day IL with a strained left hamstring.

Catcher William Contreras was recalled from the Braves' alternate site and started Sunday against the Blue Jays. Catcher Jeff Mathis had his contract purchased from alternate site.

Contreras, 23, made his major league debut last season, going 4 for 10 in four games. He was the 27th man for Atlanta's doubleheader on April 25 against Arizona.

Mathis, 38, spent the previous two seasons with Texas. The 16-year veteran known for his defense has a career .194 batting average in 945 games. 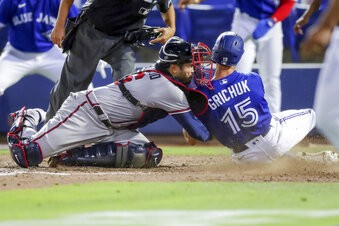