GAINESVILLE — Cherokee Bluff baseball coach Jeremy Kemp knows it all too well. In an even series, even the slightest mistake can be the ultimate difference.

Unfortunately for his Bears, four huge errors in a five-run sixth inning for North Hall proved too much to overcome in an 8-6 loss to the Trojans at Cottrell Field on Wednesday.

It was even more disappointing considering the Class 3A fifth-ranked Bears led the No. 2-ranked Trojans 2-0 and later 4-2 with just six outs left to even their key Region 7-3A series.

“You can’t make four errors like that against a good team,” Kemp said. “The little things got us (tonight). We’re a young team and we played like a young team but we’re getting there.”

“That’s a good baseball team over there,” North Hall coach Trevor Flow said of the Bears. “They are going to make some noise in the playoffs this year I have no doubt. But I thought our guys really battled back and competed when they got down.”

The Bears struck first in the opening frame. After a two-out walk to Bears’ leading hitter Ben Jenkins, Bluff’s Bryce England hammered a Eli Reece pitch to deep center for a quick 2-0 lead.

The Trojans got a run back in the bottom of the first when Tate Brooks scored on a Dylan Kautz wild pitch with two out after singling to lead off.

Bluff was poised for a potential big inning of its own in the second when Lucas Tritt doubled and Jacob Vokal was hit by a pitch with no outs. But Reece Chambers popped out to Reece, who then struck out Ty Corbin and got Kautz to ground out to get out of the jam with no runs scored.

In the third Reece found himself in another jam after a Clay Tyas hit and an error on a potential double play put runners at first and second with no outs. But Reece caught England looking on a strikeout and induced a Caleb Piland double play grounder to keep the score 2-1.

North Hall then tied the game in the bottom of the inning when Brooks reached on an error, stole second, and later scored on a RBI single from Jace Bowen.

Bluff reclaimed the lead in the fifth on an RBI single from Jenkins and a RBI groundout from England for a 4-2 lead. But the Trojans got another double play to prevent a bigger inning.

North Hall answered right back in the bottom of the inning as Hudson Barrett singled to lead off and scored on a Jay Johnson single after a Brooks double put runners at second and third. But the Trojans eventually left the bases loaded as Kautz snared a lined shot by Bradford Puryear and then fanned Cooper Helton to get out of the inning with a 4-3 lead.

The sixth was the Bears’ undoing as North Hall took its first and only lead. Bowen had the only RBI hit and Puryear drove in a run with a sacrifice fly.

The Bears did not go away, loading the bases in the seventh with no outs on a Tyas walk, a Jenkins single, and an error. Tyas scored on a double play and Jenkins scored on a RBI double from Piland to cut it to 8-6.

But the Trojans held on as Baker Dyer, who came in for Landon Davis with the count 2-0, battled back to strike out Vokal, who represented the tying run, and end the game for the save.

“Baker hasn’t pitched much but he’s a guy that has the mentality that he’s not going to get beat,” Flow said. “I just looked at him at 2-0 and asked if he was ready and he said ‘Let’s go!’ He did exactly what I asked him to do.”

“Our guys are going to fight and they did that at the end,” Kemp said. “Unlike the first game of the series [a 4-0 North Hall win] we feel we competed and probably let this one slip away from us. We’re going to come back on Friday and try and salvage one.”

The two teams will close out their series on Friday at Cherokee Bluff.

NOTES: Catcher Tate Brooks had two hits and reached base all four times and scored three runs for North Hall from the lead-off spot. ... The bottom of the Trojans order was 2-for-7 with 3 runs scored compared to the bottom of the Bears order going 0-for-8 with 3 strikeouts. ... It was the fifth straight win for North Hall, which is 6-1 in its last 7 home games. ... The Bears were 8-2 on the road on the season and had won four straight road games until Wednesday. ... England drove in three of the Bears’ four runs. Jenkins was 2-for-3 with an RBI and scored two runs for Bluff. 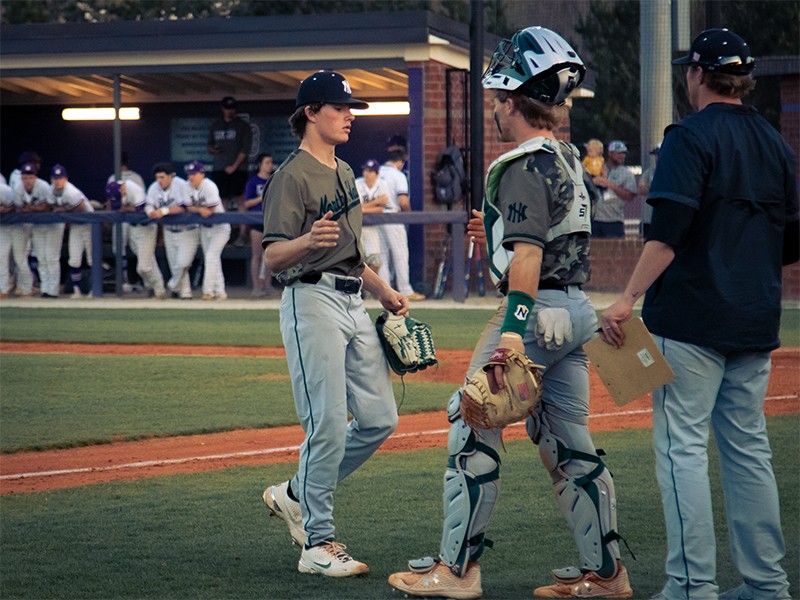 North Hall catcher Tate Brooks (center) had two hits and scored three runs to help lead the Trojans to an 8-6, come-from-behind win over Cherokee Bluff on Wednesday at Cottrell Field.