RABBITTOWN — It was all in the eyes for Walter Bran.

The senior East Hall goalkeeper said he knew exactly what he needed to do after looking into the eyes of Flowery Branch’s Edgar Hernandez.

“He flashed his eyes to the (my) right so I knew he was going to my left and I was able to get a hand on it,” Bran said after he stopped the third of three consecutive penalty kick shots by the Falcons to preserve a 2-1 victory at East Hall Stadium and capture the Region 8-4A title for the Vikings.

“I just guessed right on the first two but I was able to read the last one. It just feels great to be able to do this as a senior. Unbelievable.”

The penalty kick phase seemed a fitting end for two teams evenly matched in a winner-take-all showdown. And after 91 minutes through regulation, one 10-minute overtime and almost two minutes into a second OT, it seemed no one was destined to score.

But the Vikings, playing a man up after the Falcons’ Cole Biasi was shown a red card late in regulation, finally broke through. Ranferi Lara notched just his second goal of the season on a header off a corner from Angel Mejia with 8:04 left in the second overtime for a 1-0 lead.

That seemed like it would be enough as Bran stopped two scoring chances in a two-minute flurry by the Falcons moments later. A rare East Hall defensive mistake, however, gave the Falcons’ Will Watson an open look inside the box and he buried a 15-yard blast past a diving Bran to tie the game with just 2:43 left.

“Both teams played at their absolute limit and that game could have gone either way,” Wade said. “But ultimately it came down to our keeper. Walter has been a rock all season and he was outstanding tonight.

“Both teams fought to the end of 100 minutes. But I’m happy for our guys. They have come through a lot of adversity this year. Just proud of them and the fight they showed.”

Most of the match was a defensive slugfest as only a handful of clean shots were given up by either side, though both teams had their chances.

Only twice in the first half did either team have an open look inside the box as the defenses blocked more than half a dozen shots each.

Both teams looked to attack early and tried to counter when given the opportunity. East Hall had two good chances within the first 15 minutes with Samuels ending up with a one-on-one with Branch keeper Sal Sengson but whiffed on a potential shot in the box.

The Falcons had three corners in a two-minute span in the first six minutes but could not generate a shot on goal.

It was a midfield battle for roughly 20 minutes after the opening minutes of the game. The Vikings had another good shot in the 29th minute on a 40-yard direct kick but Sengson made the save right at the goal line.

Branch had a golden opportunity in the 35th minute with an open look in the box but the shot went high. Two minutes later the Falcons had another chance inside the box with that shot sailing wide right.

The Falcons had one last chance in the final minute  on a direct kick but could not generate a clear shot as the game went to the half scoreless.

The second half saw the offenses pick up the pace. The Falcons controlled the action early with three corners in the first 20 minutes but could not muster a clean shot.

The Vikings had two open shots inside the box in the 67th and 68th minutes but both sailed just Sengson over the crossbar. Sengson sent it to overtime with a beautiful diving save in the final minute.

The Falcons defense stood tall in the first overtime blocking six shots, including three from point-blank range in succession.

Both teams will take extended time off with Spring Break next week.

The Falcons won’t be back in action until April 10 with a season-finale road game at Providence Christian.

East Hall is off until playing host to Gainesville on April 13. The Vikings then will close out the regular season at home on April 16 against North Forsyth. 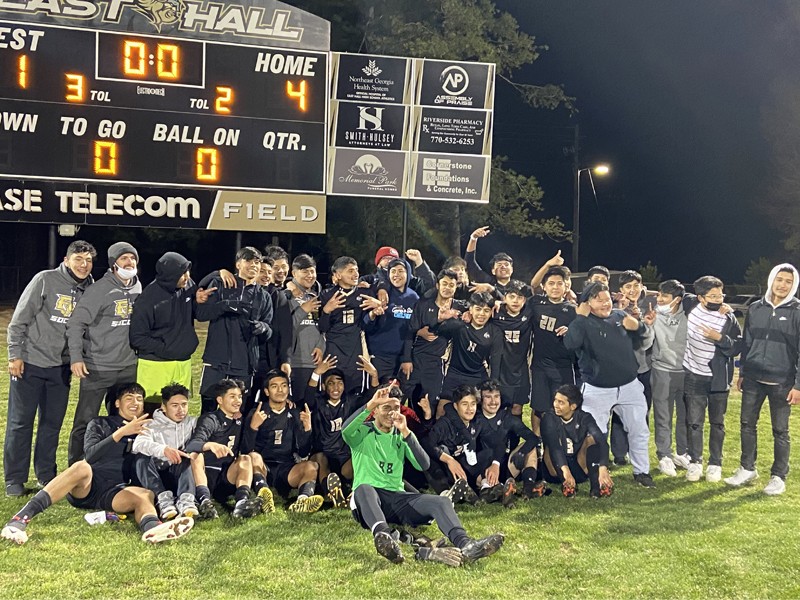 The East Hall boys soccer team took a thrilling 2-1 win over Flowery Branch on Thursday in a showdown for the Region 8-4A title.