Conventional wisdom says that drivers with extensive experience on dirt — Kyle Larson, Christopher Bell, Austin Dillon, Chase Briscoe and Stewart Friesen, to name a few — should have the upper hand on Sunday.

But the race is 250 laps long — a marathon for dirt drivers — and no one can predict how the track will change over the course of the race.

To turn the concrete half-mile at Thunder Valley into a dirt track, Bristol imported 2,300 truckloads of dirt. The banking was softened from its usual 24-28 degrees to 19 degrees in the corners, still steep by most dirt-track standards.

The NASCAR Camping World Truck Series raced seven times at Eldora Speedway in Rossburg, Ohio, from 2013 through 2019. Eldora is banked as high as 24 degrees in the corners.

Six of the seven winners of the Truck Series races at Eldora are competing in Sunday’s Cup race — Dillon, Bubba Wallace, Bell, Larson, Briscoe and Friesen. The only exception is Matt Crafton, who is entered in Saturday’s Pinty’s Truck Race on Dirt.

Nevertheless, the watchword for the Cup Series’ return to dirt is unpredictability. With a driver in the cockpit, a Cup car weighs 3,400 pounds — more than twice the weight of a winged sprint car and 1,000 pounds heavier than the dirt late model Larson drove to a pair of second-place finishes last Friday and Saturday at the Bristol Dirt Nationals in a tune-up for the NASCAR weekend.

In his maiden season with Hendrick Motorsports, Larson already has an asphalt win this season, and he ran a strong second to Ryan Blaney last Sunday at Atlanta.

“I think I’m considered a favorite probably at most race tracks right now,” Larson said. “But I think with it being a dirt track, yes, I think people look at me with all the experience that I have on dirt as being even more of a favorite. But these cars are way different than what I typically race on dirt. They don’t drive anything like what I’m used to with a sprint car, midget or now a dirt late model.

“These cars are way heavier and have a lot less horsepower than I’m used to on a dirt track. I still think I’ve got a good shot, but I don’t really know if I have an advantage over anybody, other than just being able to kind of read the track surface, know kind of how that’s changing, where to find grip and things like that. Really, I think that’s probably the only advantage any of us dirt guys have over somebody who hasn’t had much dirt experience.”

Cup drivers will have two 50-minute practice sessions on Friday to help them prepare for the novel experience of racing stock cars on dirt. The starting order for Sunday’s race will be set through four heat races on Saturday, using a combination of finishing position in the heats and passing points.

In addition to the Cup regulars, Sunday’s race has attracted two entries from the dirt world: USAC Triple Crown winner Chris Windom and Shane Golobic. Windom has raced five times in the Truck Series, three times on pavement and twice at Eldora, with a best finish of 14th there.

To gain as much experience on the Bristol dirt as they possibly can, eight drivers entered in Sunday’s Cup race have signed up for the Saturday’s Pinty’s Truck Race on Dirt.

“He’s going to be one of the ones to beat, no doubt. Friesen will be really, really fast as well. You’ve got Mike Marlar, a World of Outlaws Dirt Late Model champion. You are going to have a lot of really, really good drivers out there, without a doubt.”

Crafton got his first taste of dirt racing at Eldora and went on to win there in 2017. He enjoyed the experience so much that he is now fielding his own dirt modified.

“I enjoy it so much because it’s so different than something I’ve raced my whole life, and I started racing it with the trucks,” Crafton said. “I started racing other people’s cars and I fell in love with it and ended up buying my own car and spend a lot of time doing it. I think I’ve raced 15 races this year already on dirt.”

Friesen’s wife Jessica, also an accomplished dirt racer, is entered in Saturday’s race. Elton Sawyer and Patty Moise were the last husband-wife combination to compete in a NASCAR national series. Their last race together was a Nov. 7, 1998 Xfinity Series event at Atlanta Motor Speedway. 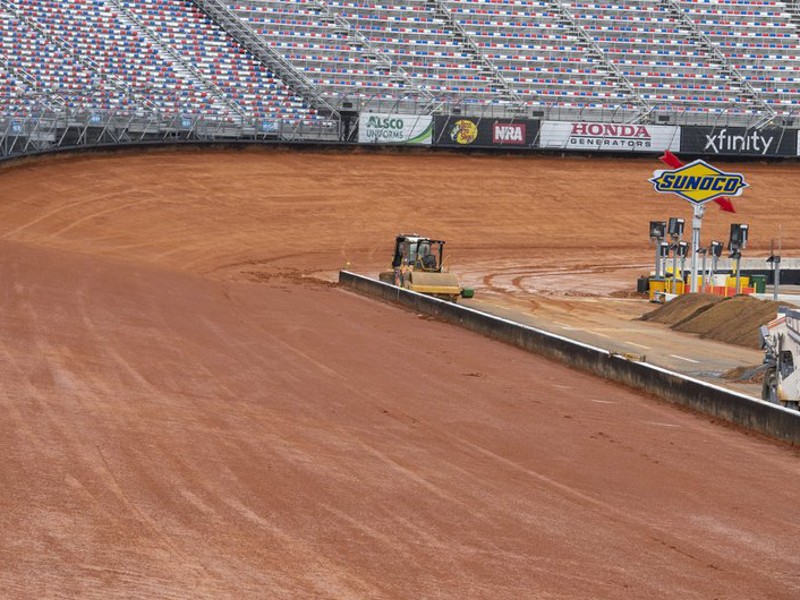 FILE - Bristol Motor Speedway has transformed the half-mile concrete track into a dirt track, in Bristol Tenn., in this Friday, Feb. 19, 2021, file photo. Bristol, once one of the toughest tickets in sports, trucked 23,000 cubic yards of dirt into its famed bullring to transform the facility and host NASCAR's first Cup race on dirt in 70 years on Sunday, March 28. (David Crigger/Bristol Herald Courier via AP, File)