BUFORD — Class 6A has proven to be the most unpredictable classification so far in the Georgia High School Association playoffs.

Only three region champs have managed to navigate their way to Friday's quarterfinals. Three lower-seeded teams won again last week making eight the number of upset wins in the first two rounds. One No. 4 seed -- Johns Creek -- is still alive.

However, two of the three region champs -- No. 1 Buford and No. 2 Lee County -- will meet in Leesburg and one of the top two ranked teams in Class 6A will be gone. It also is a rematch of last year's state championship game.

Kickoff is slated for 7:30 p.m. and you can hear the action live on WDUN AM 550 beginning with the pregame show at 7 p.m.

Five of the top 10 ranked teams at the end of the regular season are still playing but four are on one side of the bracket and only two will be left standing.

CLASS 6A
Regions 8 and 1 each have two teams into the Elite 8 while Regions 2, 3, and 6 did not have any teams advance out of the second round. ... Three more lower seeds won, including No. 4 seed Johns Creek, last week. Only three region champs -- Lee County (Region 1), Hughes (Region 4), Buford (region 8) -- advanced to the quarterfinals, the lowest amount of the 8 classifications. ... Look for plenty of offense in this round. The top five and 6 of the top 7 offensive teams advanced. Lee County leads 6A in scoring (519, 43.2 ppg). ... The top 2 defense (Buford and Hughes) and 3 of the top 4 defenses are left but that’s it. The other 5 teams all have given up 218 points or more on the season. Buford leads the classification in defense allowing just 7.0 ppg. ... Hughes is into its 2nd straight quarterfinals but has never advanced to the semifinals. ... Johns Creek is the only No. 4 seed left and just 1 of 2 in the state (Class A Public Manchester). ... Regions 1, 4, and 8 each have two teams left and Regions 5 and 7 have 1 left each. ... Carrollton is making its 6th straight quarterfinal appearance, the Trojans' 2nd-best ever streak surpassed only by a 10-year run to the semfinals or better from 1959 to 1968. 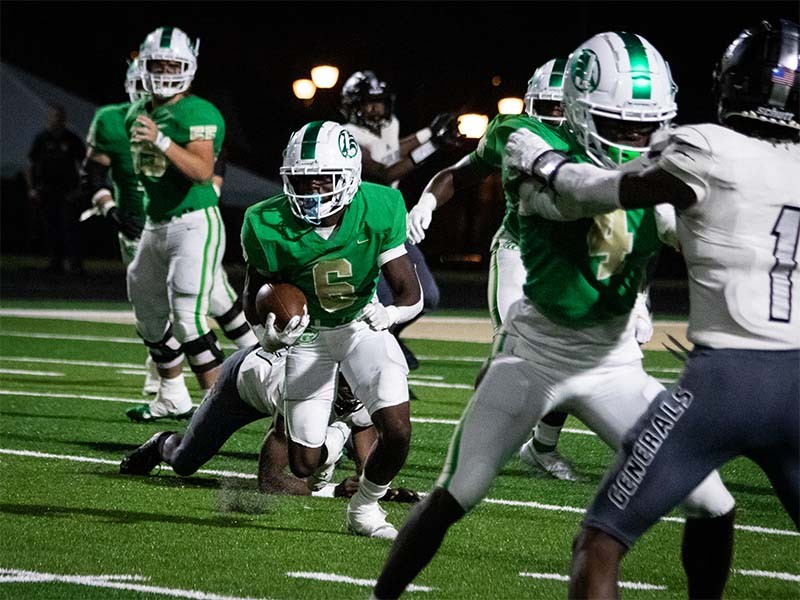 Senior running back Victor Venn (6) will help lead the No. 1 Wolves against No. 2 Lee County on Friday in Leesburg in the quarterfinals of the Class 6A playoffs.