Football: Trojans ready for a new start in playoffs

GAINESVILLE — Every team deals with adversity -- inside and outside its inner-workings. Every coach is used to it, and typically ready with a game plan for whatever comes their way.

But North Hall coach David Bishop said the 2021 campaign has been like no other. The long-time coach lost his mother early in the season and six players also had to deal with deaths in the family. There were countless injuries, seemingly a key one every week. So far, nearly 100 games team-wide have been lost to injury.

The Trojans started 1-2, including a stunning 42-0 loss to Stephens County at The Brickyard. Then they won five straight to get within one win of a region title. But they dropped their final two games to finish a disappointing third in Region 7-3A and lose a chance to host a first round playoff game.

“This has probably been the most difficult season I’ve ever experienced with all the tragedy within the program; the injuries; just one thing after the next it seemed like every week,” Bishop said. “But I can’t tell you how proud I am of how the kids have handled all this adversity. The coaches have done a great, great job of keeping the kids that were available every week focused.

“We were moving guys around every week to places they hadn’t played before or playing a bunch of young guys that didn’t have any varsity experience. It’s been a tough year but I’m pretty pleased with how things have turned out overall.”

And through all that, the Trojans still advanced to the playoffs. They also lead the entire state in rushing at 320 yards/game with their patented wing-T attack.

On Friday in Atlanta, they have a chance to turn all the negative into something positive. The Trojans (6-4) take on No. 8 Carver-Atlanta (7-2) in the first round of the Class 3A playoffs at Henderson Stadium near Piedmont Park. Kickoff is slated for 7:30 p.m. You can hear the game live on 94.5 FM The Lake beginning with the Hardy Chevrolet Tailgate Show at 6 p.m.

Carver has been ranked most of the season. They play in a brutal Region 5-3A that houses No. 1 Cedar Grove. The Panthers only losses were to Class 7A West Forsyth in their opener and to Cedar Grove for their only region loss. However, despite riding a current four-game winning streak, they have allowed 49 points (24.5 ppg) in their last two games played (they won over Salem in a forfeit last week).

That could play into North Hall’s hands. The Trojans’ wing-T is a difficult offense to contain on short-order and they have the No. 3 rusher in Class 3A in senior running back Kevin Rochester (1,450 yards, 17 TD). You can bet the Trojans and Rochester are looking to rebound from last week’s 26-8 loss to Dawson County.

Penalties have become an issue. They slowed down the Trojans rushing attack last week and in a gut-wrenching 28-26 loss to Cherokee Bluff the week before.

“We were disappointed the last two weeks because we just didn’t play the way we know we’re capable,” Bishop said. “The kids are playing hard and a lot of the penalties are kids just trying to make something happen. I love how hard they’re playing. I’m not sure how you prevent those things from happening.”

The Panthers bring in a spread attack that is focused on running the ball and averaging 31.0 ppg. Whichever team can establish the early push up front will have the advantage.

North Hall’s junior linebacker Jeremiah Telander could be the key X-factor. He was a beast against Cherokee Bluff with 15 tackles, nearly half for loss, and was in the backfield almost as much as Bears quarterback Sebastian Irons. He leads the team with 125 tackles, with an eye-popping 32 for loss on the season.

However, they are now without sophomore linebacker Trey Patterson, who is third on the team with 9 tackles for loss.

“We’re just going to go play with the guys we have. But Jeremiah is a big key to what we do on defense,” Bishop said. “He’s as good as there is anywhere, in my opinion, but it also will come down to all the other little things as well. Carver is so explosive. We’re going to have to make three or four stops to be able to win.”

On offense, using their wing-T to take control early is in every game plan for North Hall. But against Dawson County, senior quarterback Bradford Puryear was 7-of-13 for 124 yards passing. He was just 8-for-18 on the season heading into their finale. Telander caught five balls for 99 yards and is their leading receiver with 10 catches for 199 yards and one touchdown.

“We’re going to have to control the ball, drain the clock, and keep their offense off the field. That’s crucial,” Bishop said. “It’s cool leading the state in rushing but we’ve had to rely a little more on the run game with all the injuries, which has really affected what we wanted to do in the passing game. But I think we can mix that in a little more.

“Jeremiah is a big target and we’ve had some success throwing it. That could be something we do more of, depending on the situation and how the game is going. Finishing drives is also going to be a huge factor for us.”

Bishop acknowledged that they have become a product of their own success over the years and that a third place finish and a playoff appearance are just part of a bigger picture.

“We always have high expectations here,” Bishop said. “Winning the region is a big goal and so is getting a home playoff game. Unfortunately we didn’t get those so that’s disappointing.

“But we still have several goals that we want to accomplish and those are still right in front of us. Now, we just move on to getting a win in the playoffs.”

FIRST ROUND FOOTBALL PLAYOFFS
(Games listed by date and classification, highest to smallest)
(Games listed by visiting team in alphabetical order)
(All kickoffs at 7:30 p.m. unless otherwise noted)
(Area teams highlighted in bold) 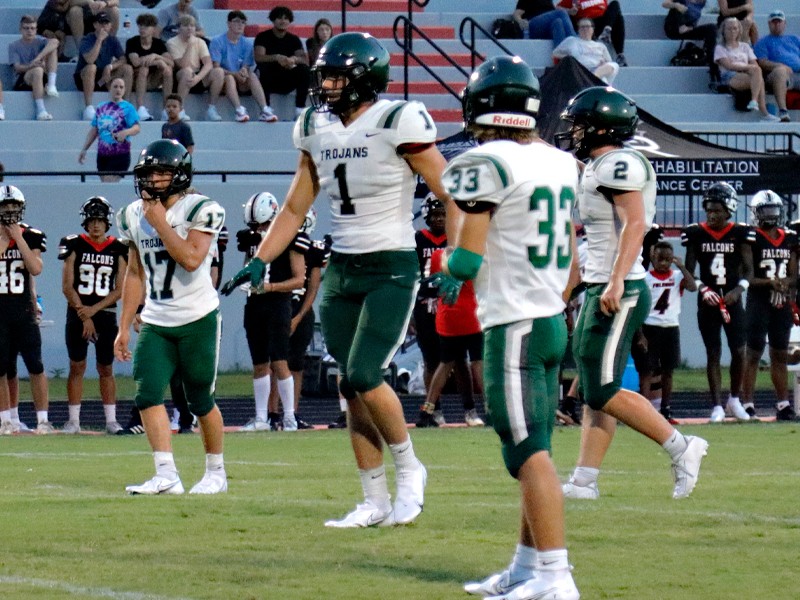 Senior Jeremiah Telander (1) could be a major factor for North Hall in the first round of the GHSA state playoffs. The Trojans travel to Atlanta on Friday to take on No. 8 Carver-Atlanta. Kickoff is set for 7:30 p.m. at Henderson Stadium.