Morton vs. Lauer in Game 4 of NLDS between Braves, Brewers

ATLANTA (AP) — Charlie Morton will start Tuesday on three days' rest for the Atlanta Braves in Game 4 of their NL Division Series against the Milwaukee Brewers.

Morton, one of baseball's best clutch pitchers, was looking to give the Braves a clinching victory in the best-of-five series.

He'll be opposed by Milwaukee's Eric Lauer, who was set to make his first appearance of this postseason. The left-hander went 7-5 with a 3.19 ERA in 24 appearances during the regular season, including 20 starts.

Both teams waited until just a few hours before the game to announce their starting pitchers on Twitter.

Morton worked into the seventh inning on Friday, throwing 85 pitches in a 2-1 loss to the Brewers in Game 1. He is the only Atlanta pitcher to give up any runs in the series, surrendering a two-run homer to Rowdy Tellez.

Atlanta bounced back with a pair of shutout victories to grab a 2-1 lead in the series. If the Brewers win Game 4, the deciding game would be held Thursday in Milwaukee.

Atlanta's Max Fried would start Game 5 on full rest if necessary. Otherwise, he would start the opener of the NL championship series against either San Francisco or the Los Angeles Dodgers.

The Brewers decided not to pitch ace Corbin Burnes on three days' rest in Game 4, which would make him available to start Thursday if the series goes back to Milwaukee.

The 37-year-old Morton has pitched on short rest one other time in the postseason.

With Houston in 2017, he started Game 4 of the World Series, pitching 6 1-3 innings, then came back in relief in Game 7 to work the final four innings. He allowed just one run and earned the win in a Series-clinching 5-1 victory over the Los Angeles Dodgers.

Morton is the only pitcher in baseball history to win four winner-take-all games in the playoffs. He was 7-4 with a 3.34 ERA in 14 postseason appearances before Tuesday. 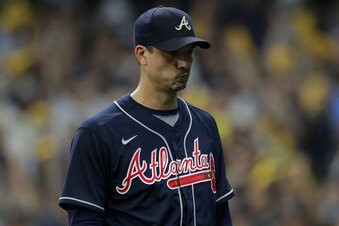