The Falcons said they held a virtual interview with Smith on Monday. Smith also interviewed for the Jets' head coaching vacancy on Monday.

The 38-year-old Smith has been served on the Tennessee staff for 10 seasons, including two as offensive coordinator. The Titans finished this season tied for second in the NFL in total yards.

The Titans went 11-5 to win the AFC South but were eliminated from the playoffs Sunday with a 20-13 loss to Baltimore. It was Tennessee's fewest points of the season.

The loss makes Smith available for in-person interviews with teams.

Smith is the sixth known candidate to interview for the Atlanta job, including Falcons interim coach Raheem Morris.

The Falcons conducted a virtual interview with Hackett on Thursday, one day after meeting virtually with Brady.

Dan Quinn was fired after the Falcons started the season with five straight losses. Morris went 4-7 as the interim coach to complete the 4-12 season. 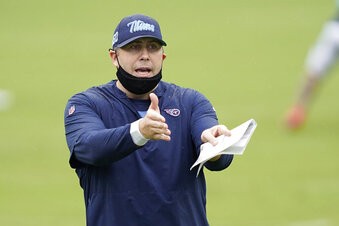