Playing the first game inside the newly renovated Carrier Dome might provide that boost. Syracuse (0-2, 0-2 Atlantic Coast Conference) hosts Georgia Tech (1-1, 1-0) on Saturday in a rare trip north for the Yellow Jackets.

The game comes 40 years and six days after the first football game ever played inside the Dome — a 36-24 Syracuse victory over Miami of Ohio. That game attracted an overflow crowd of 50,564, still the record for the building. The new scoreboard will be flashing and the new sound system will be cranking, but the Loud House won’t be the same without fans, leaving it up to the players to do the energizing.

“I feel like you just have to have a unique imagination,” Orange defensive back Andre Cisco said. “Sometimes when I go work out by myself I just imagine the fans being there. It just motivates me to work harder. You have to use your imagination and be a kid again and picture the stadium full. It’s going to be all right. Playing these past two games, I really haven’t even noticed the fans not being there.”

The Yellow Jackets won their season opener at Florida State, 16-13, then lost last week 49-21 at home to No. 13 UCF. They trailed in that one by just seven points in the fourth quarter before fading.

Other things to know when Georgia Tech visits Syracuse on Saturday:

Georgia Tech freshman RB Jahmyr Gibbs, who did not play in the season opener because of an injury, had a memorable college debut last week. He had 219 all-purpose yards and scored twice in the loss to UCF. The first time he touched the ball Gibbs returned the opening kickoff 75 yards to set up a touchdown that stunned UCF. He then scored Tech's next two touchdowns, on a 6-yard pass from freshman QB Jeff Sims and a nifty 33-yard run. Gibbs was named the ACC rookie of the week after finishing with 93 yards on two kickoff returns, 66 rushing yards on 15 carries, and a team-high 60 yards receiving on four catches. Sims, a dual threat, received the same honor the previous week after amassing 341 yards of total offense in the win at FSU.

“Very proud of those two young men and what they’ve done," Georgia Tech coach Geoff Collins said. "My favorite thing about those two guys is there’s a lot of humility.”

Babers said he planned to rotate quarterbacks but kept redshirt junior Tommy DeVito as the starter and Rex Culpepper the backup. DeVito has struggled behind an offensive line that too many times hasn't given him much time to throw and it shows — Syracuse leads the nation in sacks allowed with 14 and is averaging just 186.5 yards of total offense, last in the nation.

Georgia Tech’s offense has piled up the yards in an early-season surge, netting 471 last week, its highest total in 18 games. Last season, the Yellow Jackets averaged 286.3 yards per game to rank 127th out of 130 teams nationally and did not have a 400-yard game. The problem against UCF was five turnovers.

“Ball security is at a premium," Collins said. “You cannot give a team like that five extra possessions in a game that’s a one-score game in the fourth quarter.”

Georgia Tech has never played in Syracuse and is coming to New York state for only the third time in its 128 seasons of football and first since a 16-7 win over Penn State in 1925 at Yankee Stadium. The Yellow Jackets are 3-0 against Syracuse, including a 51-14 blowout in the 2004 Champs Sports Bowl, which cost former Orange coach Paul Pasqualoni his job after 107 wins in 14 seasons. 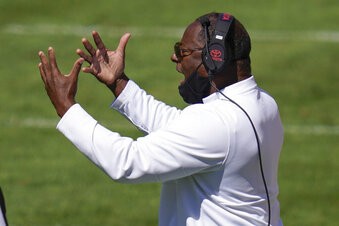 Syracuse head coach Dino Babers calls out to his team during the first half of an NCAA college football game against Pittsburgh, Saturday, Sept. 19, 2020, in Pittsburgh. Pittsburgh won 21-10.