ATLANTA — After making just one start for the Atlanta Braves, Cole Hamels is done for the season.

Hamels reported shortly before the start of a four-game series against the Miami Marlins that he didn't feel like he could get anything on the ball. The left-hander was scheduled to make his second start Tuesday after struggling throughout the year to overcome shoulder and triceps issues.

The Braves placed Hamels on the 10-day injured list, retroactive to Sept. 18,, but that was a mere formality. General manager Alex Anthopoulos already contacted Major League Baseball about replacing Hamels in the team's postseason player pool.

“Cole knows himself and his body,” Anthopoulos said. “You trust the player at that point when he says he can't go.”

The Braves began Monday with a three-game lead in the NL East .and primed for their third straight division title.

Even with that success, Atlanta has struggled throughout the shortened 60-game series to put together a consistent rotation beyond Cy Young contender Max Fried and rookie Ian Anderson.

Expected ace Mike Soroka went down with a season-ending injury, former All-Star Mike Foltynewicz was demoted after just one start, and Sean Newcomb also was sent to the alternate training site after getting hammered in his four starts.

The Braves have used 12 starters this season.

Anthopoulos had hoped to land another top starter at the trade deadline but the only deal he was able to make was acquiring journeyman Tommy Milone from the Orioles. He's on the injured list after getting hammered in three starts for the Braves, giving up 22 hits and 16 runs in just 9 2/3 innings.

“There's no doubt that our starting pitching has not performed to the level we wanted it to or expected it to,” Anthopoulos said. “I know that each year you never have all parts of your club firing. That's why depth is so important.”

Hamels, who signed an $18 million, one-year contract last December, reported for spring training with a sore shoulder stemming from an offseason workout.

When camps were shut down because of the coronavirus pandemic, Hamels was able to take a more cautious approach to his rehabilitation. But a triceps issue sidelined again before the delayed start of the season in July.

The Braves hoped Hamels would return in time to provide a boost for the playoffs. He also was scheduled to start the final game of the regular season Sunday, putting him in position to join the postseason rotation behind Fried and Anderson.

Now, Hamels is done for the year, his Braves' career possibly ending after he made that one appearance last week in Baltimore. He went 3 1/3 innings, giving up three runs on three hits, with two strikeouts and one walk in a loss to the Orioles.

Hamels reported no problems immediately after his start, but he didn't feel right after a bullpen session a couple of days ago.

“You're not going to try to talk the player into it,” Anthopoulos said. “When he says he isn't right, that's all we need to hear.”

Atlanta recalled right-hander Bryse Wilson to replace Hamels on the 28-man roster. The Braves did not immediately name a starter for Tuesday's game.

Hamels is a four-time All-Star with a career record of 163-122. He starred on Philadelphia's World Series-winning team in 2008 and also pitched for Texas and the Chicago Cubs. 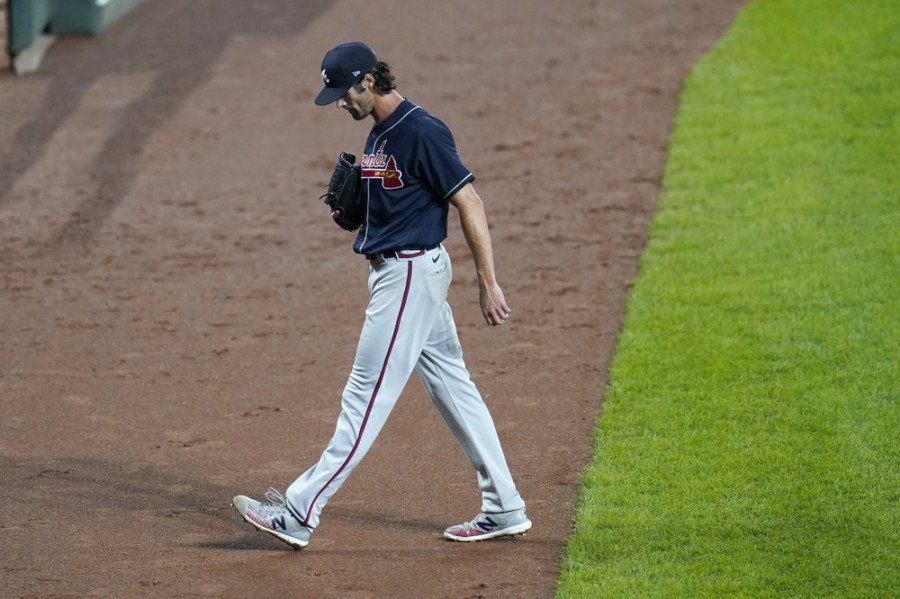 Atlanta Braves starting pitcher Cole Hamels heads to the dugout after being pulled from the mound during the fourth inning of a baseball game against the Baltimore Orioles, Wednesday, Sept. 16, 2020, in Baltimore.