Darlington goes from racing's restart to start of playoffs

DARLINGTON, S.C. (AP) — Last spring, Clint Bowyer passed a packed drag strip on the drive to Darlington Raceway unsure of what he would find when he got to NASCAR's first race back during the pandemic.

NASCAR's strict protocols to get back on track ordered drivers to travel alone in their car to the track. No family or friends were allowed. The May 17 race was without spectators and Darlington — the halfway point between NASCAR's home base in Charlotte, North Carolina, and Myrtle Beach, South Carolina — was empty.

“I remember passing a drag strip that was packed, packed to the gills with people. The beach is going crazy and you could walk across the street and walk into a diner and eat,” Bowyer said. "But you couldn’t bring my wife to the motorhome. There was just a lot of confusion.”

What Bowyer learned is that for the teams to get back to work, NASCAR had to reach agreements with state officials for every race track. It's been a complicated negotiation for series leadership, which had to reschedule nearly two months of races to get back to regular programming.

The playoffs open Sunday night at Darlington — as scheduled all along.

“It’s the house rules. It’s not uniform across the country,” said Bowyer. “You go to this state and it’s one thing. You go to the next state and its another opinion of guidelines. So they’ve done a good job of bobbing and weaving as we go throughout this endeavor of pandemic and, honestly, we’re still standing.”

The comeback is full circle Sunday as the Southern 500 marks gives Darlington a third NASCAR race for the first time in its 70-year history. Darlington learned last year it was regaining its Labor Day weekend event and would also be the playoff opener but it will be difficult to top the importance Darlington played to NASCAR's season last May.

Darlington got the engines running again and NASCAR has gotten all three of its national schedules caught up in time for the critical playoff portion of the season.

“It was a heavy lift for sure because I think when people think about the schedule, they only think about the Cup Series schedule,” said NASCAR President Steve Phelps. “But there’s a whole grid that we had to get right, not just for Cup Series but for the other series that we have as well. It’s a lot to it and I’m incredibly proud of how this industry has worked together.”

Kevin Harvick, the playoff field's top seed, gained one of his seven victories in the Darlington return. He exited the car after the win, looked around at the empty raceway and called it “surreal.” Three nights later, Denny Hamlin won in the first midweek race in decades as NASCAR used creative scheduling to make up for lost events.

“It came with a big moment of responsibility, but also everybody embraced that moment to create something big for NASCAR,” Busch said. “To get back to some sense of normalcy, everybody deserves a pat on the back in the NASCAR community.”

“Darlington and the state of South Carolina were at the forefront of bringing back live sports to our country,” Tharp said. “Something we all desperately needed at that unprecedented time.”

Darlington on Sunday can host about 8,000 fans, roughly a sixth of its 47,000-seat capacity, on NASCAR's annual throwback weekend. It's the one race where teams replace their traditional paint schemes with those from other eras to honor past drivers.

Tharp said it typically draws retired stars and Hall-of-Famers who make appearances for the track and mingle with fans. Restricted access during the pandemic has eliminated the throwback celebrations.

The drivers understand and are pleased NASCAR has made it this far.

“I was for sure skeptical that we were going to even have a season when all this started," said Chase Elliott. "I’m super happy that we have a chance to race and are able to do what we’re doing. I know it’s a little bit different, but we’re still able to put on races each week and still able to compete and put a good product on TV.” 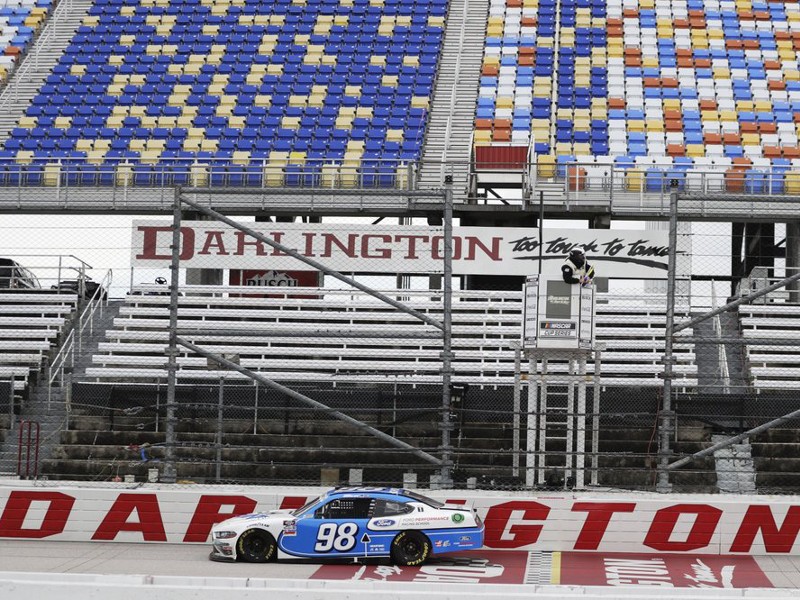 FILE - In this May 21, 2020, file photo, Chase Briscoe (98) passes empty seats during the NASCAR Xfinity Series auto race in Darlington, S.C. In South Carolina, venues ranging from Darlington Speedway to Memorial Stadium at Clemson must submit a plan to the Department of Commerce that lays out how they settled on their attendance number during the coronavirus pandemic. The speedway seats 47,000 but was approved to have 8,000 for the start of NASCAR's playoffs on Sunday (17% of capacity). (AP Photo/Brynn Anderson, File)