Braves rally from 6 down to beat Mets

ATLANTA — Former Mets catcher Travis d'Arnaud drove in five runs, including three with a bases-loaded double that capped a five-run eighth, and the Atlanta Braves rallied from a six-run deficit for a wild 11-10 win over New York on Friday night.

D'Arnaud had three hits. The biggest was the double off Seth Lugo that gave Atlanta the lead and completed the comeback from deficits of 8-2 and 10-5.

Playing the role of hero against his former team made the big night more special for d'Arnaud.

“It was fun knowing we were going to play them in the first few series,” d'Arnaud said. “Then to come out and come back like that and come out with the big hit was fun.”

Lugo (1-1) replaced Betances and walked Marcell Ozuna to load the bases. Johan Camargo popped out to shallow right field before d’Arnaud cleared the bases with his double to the gap in right-center.

D'Arnaud came off the COVID-19 injured list on Wednesday after he and Atlanta's other top catcher, Tyler Flowers, were held out at the start of the season. Both were kept away from the team until each had several negative tests for the coronavirus.

“Monday to Monday, I only left the house to go get a big Q-tip shoved up my nose,” d'Arnaud said.

Chris Martin ended the game when Wilson Ramos hit a fly ball to deep right field with runners on first and second. Martin earned his first save. Grant Dayton (1-0) pitched a scoreless eighth.

“We’ve got to get ahead of guys better, including myself,” Lugo said. “We put ourselves in a hole pitching behind in counts. ... Tonight I walked the go-ahead run and that’s just unacceptable.”

Rick Porcello couldn't take advantage of an excellent chance for his 150th career win. Given the 8-2 lead, Porcello walked Swanson on four pitches to open the fifth. Davis then dropped Freddie Freeman's shallow fly ball in left field for an error, and manager Luis Rojas brought in right-hander Paul Seawald from the bullpen.

Rojas wouldn't say before the game if Edwin Diaz would have the next save opportunity after struggling in two recent games. Diaz walked two batters, hit a batter and gave up a run while recording only one out in Thursday night’s 4-2 loss to Boston.

Now there are other new reasons to worry about the bullpen.

“I think things will turn around," Lugo said. "We’re not letting it affect the morale out there. I think we’ll bounce back.”

Ronald Acuña Jr. was hitting only .138 with 15 strikeouts in 29 at-bats before he doubled to center field in the second inning. Acuña surprised Brandon Nimmo by continuing to run and beating the throw to second base with a head-first slide.

It was the only hit of the game for Acuña, who had three more strikeouts. He has not driven in a run this season.

Braves: 2B Ozzie Albies was rested but available after reporting his right wrist had “a little stiffness” on Thursday night, according to Snitker. Albies entered the game as a pinch-hitter but needed assistance from a trainer after having more problems with the wrist in the ninth.

Atlanta RHP Touki Toussaint will make his first start since April 20, 2019, when he gave up seven earned runs at Cleveland in 1 1/3 innings, on Saturday night. Toussaint will at least temporarily move into the rotation spot left vacant when Mike Foltynewicz was designated for assignment this week. RHP Michael Wacha (1-0, 1.80) will make his second start for the Mets. 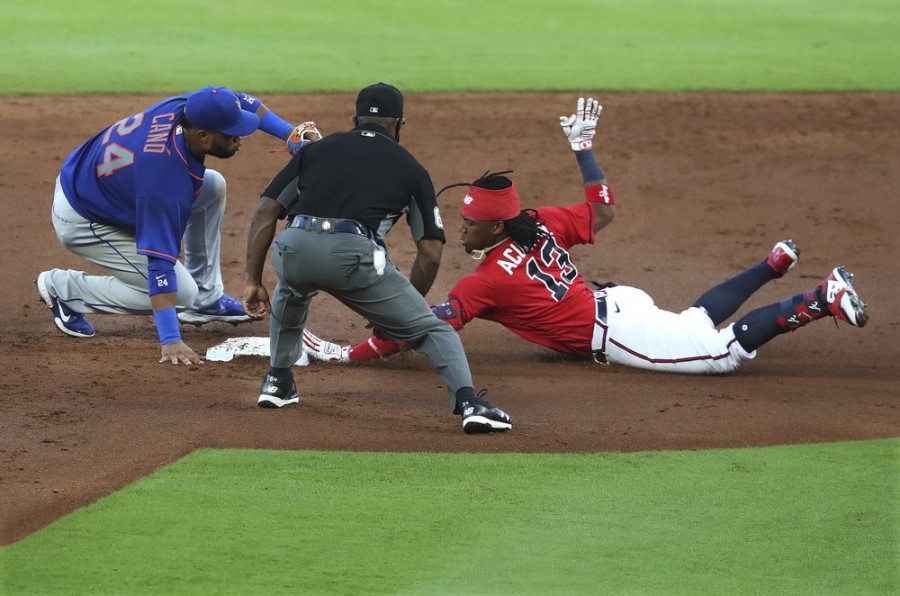