Two-a-Days: Youth could drive Spartans in 2020

There are just 20 days remaining until the kickoff of the 2020 high school football season. But make no mistake, despite the COVID-19 outbreak, swirling uncertainty since April, and the cancelation of spring practice, preparations for the upcoming campaign have been underway throughout the state since early June. And teams throughout northeast Georgia are in full countdown mode.

The Spartans surely are glad to be out of Region 7-4A, especially after suffering through their first winless season since 2009. And after reclassification, they landed in Region 7-3A, which by all accounts will be a wide-open affair with virtually every team challenging for a playoff spot.

The Spartans were young and suffered some major growing pains in 2019. But that group is now a year older with a year of varsity play under their belts.

Coach Krofton Montgomery said he expects his group to be more than ready to compete in 2020.

QUESTION: Coach, how much of a change has new QB coach Bruce Miller brought in helping to develop an offense that really struggled last year?

ANSWER: I think coach Miller along with (offensive coordinator) Coach Gross are going to put together an offense that can be consistent and have different points of attack from different positions. Coach Miller brings a ton of experience that can’t be replicated and his presence is felt by the players and other coaches when he is present.  Make no bones about it, last year isn’t something we ever want to replicate in any fashion and with maturation and tweaks to some positions we feel that our offense will be multi-faceted and much improved. Quarterbacks Clayton Jenkins and Tad Davidson look to bring some different wrinkles and experience to the field. We look forward to a big year out of Josiah Henriques and Alijiah Porchia at running back. The offensive line, led by Coach Matt Riden, has been working well together in workouts but needs pads and helmets to see where we are at this point. Receivers Matt Griffin, Preston Smith, Rodrigo Lopez, and Andrew Malin look to all be contributors early as go too options become apparent.

QUESTION: The defense, which was young and challenged in a brutally tough region last year, returns 12 of its top 15 players. And y’all are in a much more competitive region in 7-3A this season. Who do you see having potentially breakout seasons on the defensive side in 2020?

ANSWER: Defense is where I expect to see the biggest improvement across the board.  Defensive coordinator Travis Raley has spent an immeasurable amount of time analyzing our scheme and personnel to tweak some things with the returning players to put us in the best spot possible. Noah Legault and Andrew Malin are two players that started 10 games as freshmen and are back, and improved is an understatement when it comes to that age and experience. LB NIck Sturm and LB Tilil Blackwell, rising juniors and first team all region players, started every game last year as well and are bigger, faster and stronger than they were a year ago. Reagan Byrd is a rising junior that has potential to be a major playmaker in the middle of the line. All that being said I feel the biggest improvement will be in the secondary. Secondary coach Jones has been working this unit relentlessly and includes safety Sam Holcomb, first team all region player corners Jaden White and Jonathan Hall, and nickelback Alijiah Porchia. This group wants to prove some things. They have the talent and experience to be a solid back end in an increasing pass heavy schedule. Depth is also something we have in spots with a junior Caleb Baker, LB/DE Binh Hoang, and LB Shakye Shaw, a newcomer, who posses physical traits you want at the spot. 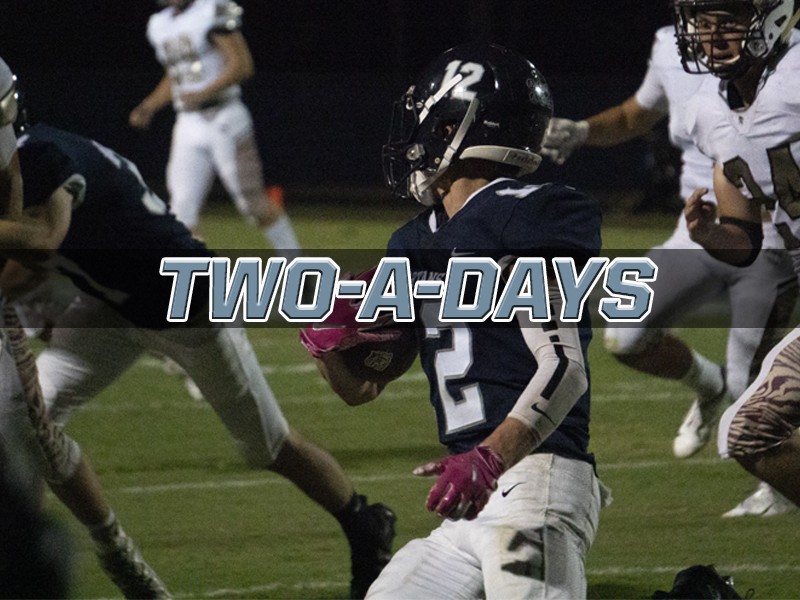