Summer weather means North Georgia residents are spending more time on the water, but maintaining the quality of this water for the enjoyment of the community is a year-round task for volunteers and staff with the Chattahoochee Riverkeeper.

Many of the efforts by CRK staff are for the safety of North Georgia residents who want to be able to safely enjoy the lake. These effort are greatly appreciated by homeowners like Haley Hobson, whose family has owned a home on Lake Lanier for four generations.

This non-profit was founded in Atlanta in 1994 as a response to heavy pollution of nearby water ways, and has expanded to now feature two satellite offices in Gainesville and LaGrange. The nearby satellite office in Gainesville is familiar to many North Georgians, as their programs focus on the maintenance of Lake Lanier.

In order to raise awareness in the community about issues surrounding the Chattahoochee River basin, CRK offers a variety of outreach and educational programs.

These programs include an opportunity for members of the community to participate in a neighborhood water watch program. Residents are provided with equipment to test a local creek or body of water and submit their samples to a CRK office for testing.

Chattahoochee Riverkeeper also offers an educational program in partnership with the Elachee Nature Science Center and Hall County Parks and Leisure for students in Kindergarten through high school. Riverkeeper staff and volunteers will take students out on a large boat known as the “floating classroom” for a day of hands-on education on lake ecology.

In addition to receiving tests from their neighborhood water watch program, Gainesville CRK staff conduct their own testing of Lake Lanier during the months of April through October. Samples from the lake undergo a brief filtering process in a CRK lab before they’re sent to another outside lab for additional testing.

The outside labs conduct more testing that can look for harmful chemicals and bacteria in the lake that may come from runoff on land. Once CRK staff receive the test results, they can either use the data to monitor conditions in the lake or contact proper officials to resolve an issue.

And monitoring lake conditions throughout the year are important, because as Hobson has observed over years of living on the lake, conditions can easily change.

“I think growing up, as my grandparents bought this house and got the dock permit, I don’t think the usage of chemicals and such things was as prevalent,” said Hobson. “Now people are using roundup in their yards and all of this, living on a lake that’s more mountainous or more hilly, all of this runs into the water.”

Collecting samples from Lake Lanier is a part of CRK’s Clean Lanier Equation, one of the latest efforts by the non-profit to focus on the preservation of the lake.

“The Clean Lanier Equation is really our newest campaign to highlight the work that we have been doing on Lake Lanier and also highlight some of the programs that we’re continuing to grow on Lake Lanier,” said Caldwell.

Each year, Chattahoochee Riverkeeper hosts a Wild & Scenic Film Festival with short films concerning a variety of messages relating to preservation and conservation of natural resources. The funds from this year’s virtual festival went to CRK’s Clean Lanier Equation.

The work of Chattahoochee Riverkeeper staff extends off of the water to the land, as well. Staff with CRK tackle some issues on land by monitoring development and construction sites for potential runoff and damage to nearby waterways.

With so much development in the North Georgia area in recent years, Caldwell and the rest of his CRK co-workers certainly have their hands full with monitoring construction sites.

But Caldwell said that he wants developers to build in a way that’s safe for the environment, not stop building entirely.

“We know that growth and development is going to occur, but we want to see it be done in a mindful manner and a sustainable manner that avoids or minimizes pollution to our waterways,” said Caldwell.

Caldwell said the key to accomplishing this goal is working together as a community.

“I think everyone has a role to play and I think that’s very important…we all can play a role with things as simple as managing our trash and our litter and supporting causes that are out there to protect waterways,” said Caldwell.

More information about Chattahoochee Riverkeeper and the work of its members can be found on their website. 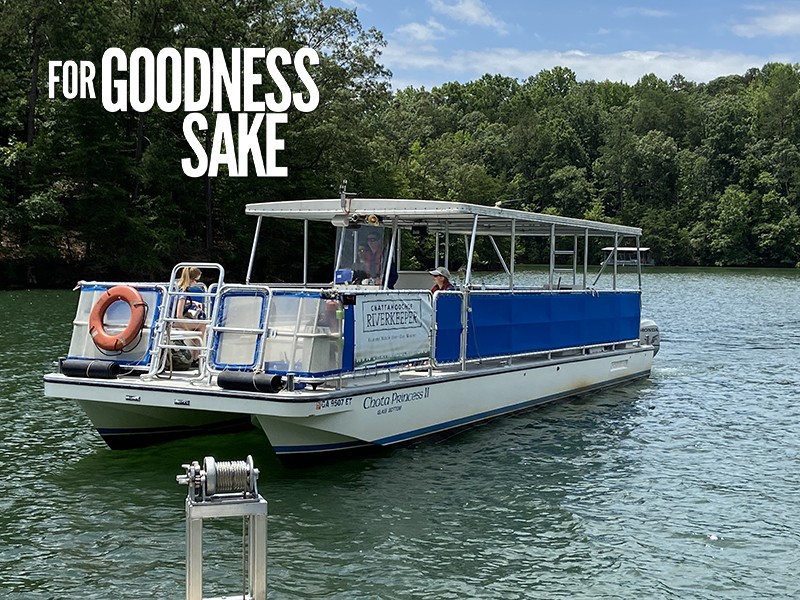