Chase Briscoe recovered from a pit road speeding penalty and a spin with 21 laps left to pick up his fourth NASCAR Xfinity Series victory of the season in Sunday’s Pocono Green 225.

In a race that went to overtime after a record ninth caution at 2.5-mile Pocono Raceway, Briscoe surrendered the lead to Ross Chastain in turn 1 after the final restart but reclaimed the top spot in the Tunnel Turn and finished 1.015 seconds ahead of the No. 10 Chevrolet a lap-and-a-half later.

The victory, Briscoe’s first at Pocono and the sixth of his career, left the driver of the No. 98 Stewart-Haas Racing Ford halfway to his stated goal of at least eight wins this season.

“We were really not that good at the beginning. We kind of struggled and didn’t have the speed I really anticipated to have here,” Briscoe said. “Zippy (crew chief Greg Zipadelli) and the guys kept working on it, kept getting it better and better. We had the lead there, after I sped on put road.

“I was a little worried, but, fortunately, a lot of the good cars got torn up and made it a little bit easier to get back through the field. Me and Ross, it was pretty fun. He’s one of the hardest guys to race against and pass… We’re halfway to eight, so hopefully we can keep going.”

In the final Xfinity Dash 4 Cash event, runner-up Chastain claimed the $100,000 bonus as the highest finisher among four eligible drivers for the second straight week — and the third straight for his team, Kaulig Racing.

But Chastain nevertheless rued his second-place result for the second straight week, especially after taking the short-lived lead from Briscoe in the two-lap sprint to the finish.

“We did everything right,” Chastain said. “Got a good push that we needed cleared him into (turn) 1. It’s tough to be upset with second, but I am. I’m so proud of Kaulig Racing… I know how lucky I am, but, man, it’s the memories we take with us — not the money.”

Leading the race on lap 69, Briscoe spun when his left rear tire went flat. But the 25-year-old from Mitchell, Indiana, kept his car off the wall and worked his way forward from 11th after the subsequent restart.

A six-car wreck on lap 53, triggered by contact between the cars of Myatt Snider and Noah Gragson, made Briscoe’s job easier by taking out the race’s dominant car, the No. 22 Team Penske Ford of Austin Cindric, who won the first stage and finished second in Stage 2. The accident also damaged the JR Motorsports cars of Gragson, Justin Allgaier and Daniel Hemric.

“I knew that I was getting a big push from behind,” said Snider, who escaped damage in the wreck and finished a career-best fourth. “I had a run coming on the 9 (Gragson), but I knew we were going to fall off real fast, so I started lifting up, but the guy behind me didn’t. So you can kind of see me squirreling around the whole time, and I’m trying slow down, but I just couldn’t stop.

“I hate that it got so many involved with it, but it ended up being a great day for us. We’re up front leading laps, and we had a chance to win there. It came down to experience for me. I’ve only had a few races with this RCR (Richard Childress Racing) car. It’s got speed. I’ve just got to get myself a little more consistent.”

Briscoe regained the series lead by three points over Gragson, who finished 22nd, one lap down.

With a tap from Austin Cindric in a three-wide situation in turn 1, Jones spun off the corner and slammed into the inside wall, destroying his No. 19 Joe Gibbs Racing Toyota.

“Ultimately, you make up spots on these restarts, so we were trying to go three-wide and get them early,” Jones said. “But, obviously, you have to have a little give and take. It’s just early. It doesn’t take much when you get three-wide to get pushed around. But from my vantage point, we got hit in the back…

“We had a really good positive. We won the truck race. I had high hopes for this race, too.”

Fourteen laps and two cautions later, Jones’ Joe Gibbs Racing teammate, Harrison Burton wiped out at the exit of turn 1 in oil spilled by Brandon Brown when his engine expired. Knocked out of the race, Burton shrugged off the collision with the inside wall.

“I was racing with the 1 (Michael Annett) and felt good, and it just instantly came around,” said Burton, who has crashed out of two straight races after opening the season with a record 10 straight top 10s, including two wins. “That’s a weird place to come around. That hit looked harder than it was, so I’m all right.

“Thankful that my team built safe racecars. I’ve unfortunately tested that out twice this year. Bummer, but we’ll be back and hopefully win some more.” 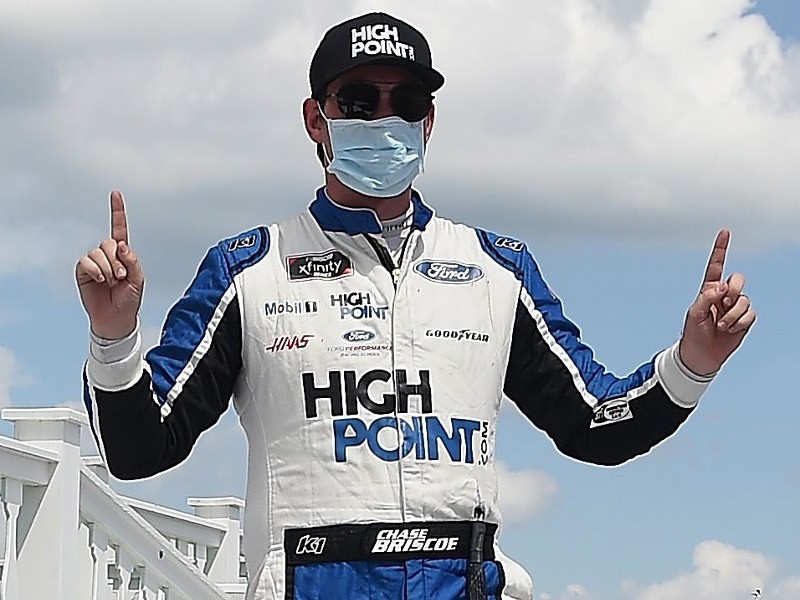