Another peaceful event was held Saturday night in Gainesville to call for an end to racism and police brutality, this one a candlelight vigil to honor victims of police brutality.

The candlelight vigil drew a crowd of hundreds of people, many of the attendees Gainesville residents.

The event was organized by the Newtown Florist Club, a longtime Civil Rights advocacy group based in Hall County. The vigil was the second event organized by the club, following a rally earlier in the week.

Newtown Florist Club has organized these events to protest racism amidst the recent killing of a George Floyd, a black man, at the hands of a white police officer in Minneapolis. Both events have started and ended peacefully.

The vigil event began at 7:30 Saturday evening in the grassy area just across the pedestrian bridge on Jesse Jewell Parkway. Numerous speakers encouraged the community to unite and bring a peaceful end to racism, including guest speaker Jentezen Franklin, senior pastor at Free Chapel church.

In addition, several attendees performed songs and poetry, each with the same peaceful message.

Around 9 p.m., vigil attendees began lighting their candles while an inspiring video played with a final call to end racism. The video was followed by an eight minute, 46 seconds-long moment of silence to honor Floyd. This time length is the same as the video released showing Floyd’s death.

Click the video above to see video footage from the candlelight vigil. 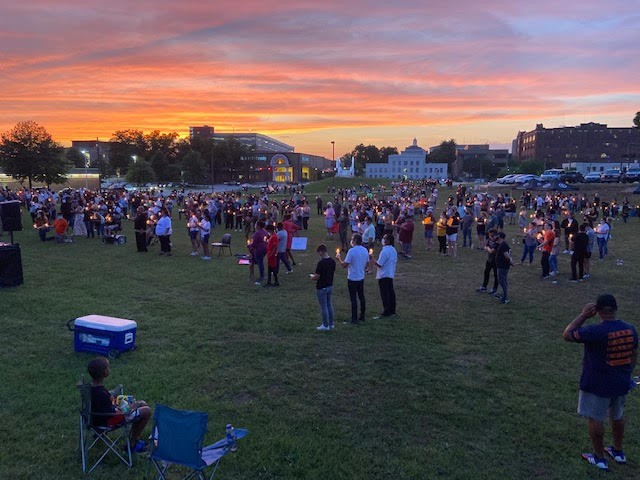 Gainesville residents came together for a candlelight vigil Saturday night to call for an end to racism. The Newtown Florist Club, a longtime Civil Rights advocacy group, organized the event.