CHARLOTTE, N.C. (AP) — Kyle Busch is NASCAR's reigning Cup champion and the resident villain of the series. Chase Elliott has been voted most popular driver the last two years and is quickly building a loyal and rabid fan base.

Their on-track tussle at Darlington Raceway this week very well might be the start of a new rivalry NASCAR needs.

Busch admittedly misjudged a gap and unintentionally wrecked Elliott in what turned out to be the final green-flag lap of Wednesday night's race. Elliott crashed, climbed out of his car, waved off medical personnel and waited on the apron for Busch to circle the track under caution.

As Busch passed, Elliott gave him a long, middle-finger salute.

The tension didn't end there, either. Rain opened up over the South Carolina track moments after the incident and drivers were told to bring their cars to pit road. When Busch parked, a group of Elliott's team members stared him down.

Among them was Elliott crew chief Alan Gustafson, who was Busch's crew chief when Busch drove for Hendrick Motorsports early in his career. Busch was informed over his radio he had a welcoming committee waiting for him, and one of his own Joe Gibbs Racing crew members sat on the wall directly next to Gustafson as a de facto bodyguard.

A NASCAR official eventually told all the mask-clad crewmen to get back over the wall, the race was called because of rain and Busch appeared to have a civil discussion with Gustafson.

NASCAR once thrived behind strong rivalries but they have lessened over the years into brief feuds or spats. Kyle Busch had an ongoing issue with Brad Keselowski for several years, while Matt Kenseth and Denny Hamlin both tangled with Joey Logano. Nothing developed into anything like the battles between Richard Petty and David Pearson or how Dale Earnhardt and Jeff Gordon raced for supremacy in NASCAR.

Busch did not rule out retaliation from Elliott down the road.

“Him and I have always had a cordial relationship over the years,” Busch said. "I’ve known him since he was 12 or 13 years old, been racing with him ever since then, Late Models, Super Late Models, Trucks, Xfinity cars, all that sort of stuff.

“I just made a mistake, misjudged the gap, sent him into the wall. That was entirely unintentional. I’ll definitely reach out to him and tell him I’m sorry, tell him I hate it that it happened.”

Elliott had no comment and there is limited media availability to drivers under NASCAR's current health protocols. The series was suspended 10 weeks during the coronavirus pandemic and just restarted Sunday. Kevin Harvick won the first race at Darlington, Hamlin and Busch gave Joe Gibbs Racing a 1-2 finish in Wednesday's race at the same track and the Cup Series is next back in action this Sunday at Charlotte Motor Speedway.

Busch's teammate, Hamlin, said Thursday that Busch handled the fallout “the best he possibly could. He owned up to it and he knew he made a mistake."

Hamlin also noted he'd been cut off twice by Elliott in the two Darlington races and chalked up the aggressiveness to drivers pushing hard after the long layoff.

“If Chase were to retaliate, you know that’s intentional, right? We all know it’s intentional,” Hamlin said. “What Kyle did was unintentional. Is the score really even if one is intentional and one is not? Probably not."

Elliott was wrecked by Hamlin racing for a win at Martinsville in a 2017 playoff race that led to a heated conversation.

Gustafson said he understood Busch's explanation but the apology probably would not immediately calm emotions. The Hendrick team believes Elliott was racing for the victory when he was wrecked by Hamlin's teammate.

“I don't think he intentionally wrecked us but you just get tired of coming out on the wrong end of those deals,” Gustafson said. “We were in position to win that race and Denny was in trouble on old tires. You get tired of getting run over like that.”

Busch is a polarizing figure because of his on-track dominance in all three of NASCAR's national series and a sometimes surly attitude, particularly when he doesn't win. He often feeds off the boos he gets during driver introductions and has been known to cup his ear as if to mock the crowd.

He celebrates his wins with a dramatic bow to the crowd, and no matter how successful — 209 national victories and a pair of Cup titles — Busch hasn't found widespread popularity. He has his own rabid fan base called “Rowdy Nation” and stopped caring about the haters long ago.

Still, Busch was quick to try to temper the anger of the Hendrick group Wednesday night.

“I’ve never been a very good politician," Busch said. "His fan base is going to have the hatred to me anyway. I just deal with what I got to deal with. Rowdy Nation will have my back and we’ll go after it after that.”

As much as NASCAR needs strong rivalries, and this has the makings for a good one, Hamlin wasn't sure retaliation from Elliott would be the smartest move.

“If Chase doesn’t retaliate, no driver thinks any less of him,” Hamlin said. "If he does, then that raises your eyebrow more than what Kyle did, in my opinion.

"I don’t think Chase needs to fight for relevance. We know he’s good, he’s talented and he’s going to win a ton of races. There are times when you don’t always have to race tough, you have to race smart, too. That’s what wins races.”

WDUN will carry live PRN Radio coverage of Sunday night's NASCAR Cup Series Coca-Cola 600 from the Charlotte Motor Speedway beginning at 5 p.m. on 102.9 FM, AM 550 and streaming live on AccessWDUN. 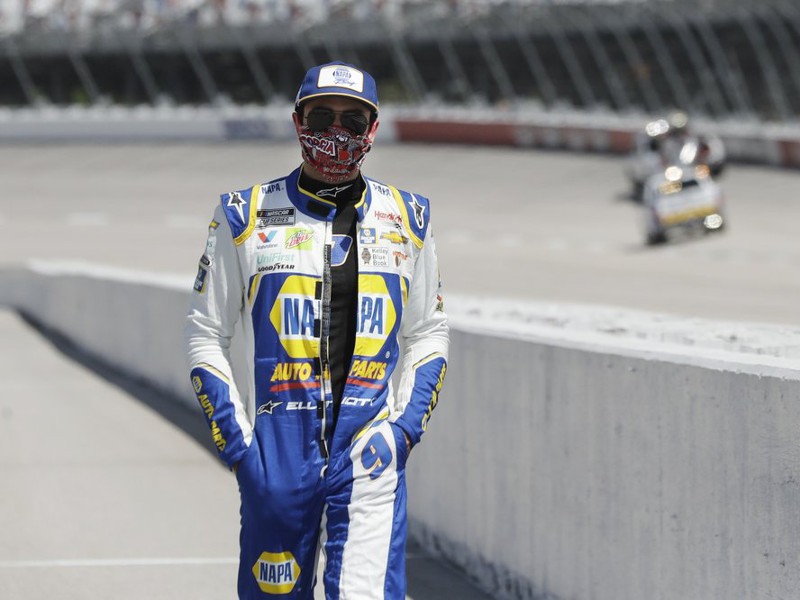 Driver Chase Elliott walks to his car for the start of the NASCAR Cup Series auto race Sunday, May 17, 2020, in Darlington, S.C. (AP Photo/Brynn Anderson) 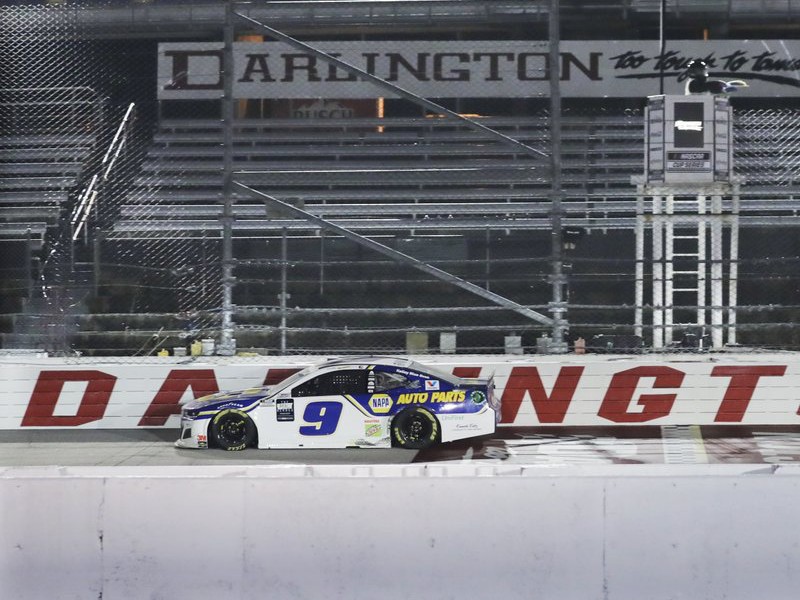 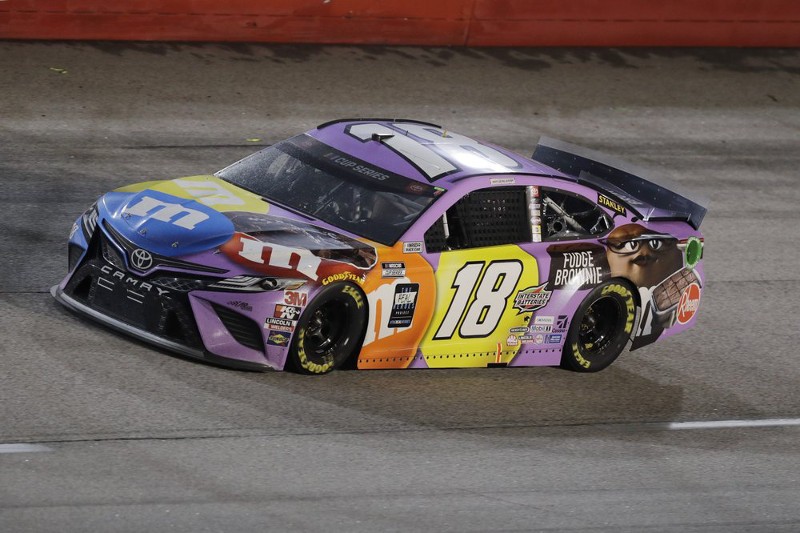 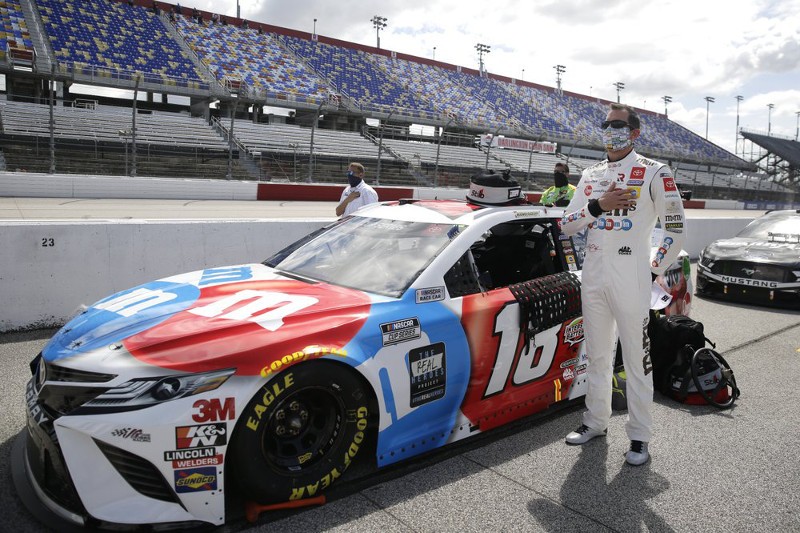 Kyle Busch stands for the playing of the national anthem before the start of the NASCAR Cup Series auto race Sunday, May 17, 2020, in Darlington, S.C. (AP Photo/Brynn Anderson)