DEMOREST – A crowd of more than 75 people braved a severe thunderstorm Tuesday night to make their voices heard to Demorest leaders about recent controversial firings, appointments and other actions in the city.

Those voices were heard as the council ultimately voted unanimously to reinstate former Police Chief Robin Krockum if he is willing to accept.

At issue was the recent firing of Krockum by City Manager Kim Simonds, and her subsequent appointment of Krockum’s predecessor, Greg Ellingson, as interim police chief without city council affirmation.

But it took most of the meeting for the council to reach agreement on rehiring Krockum.

“There was a recommendation made by the city manager to appoint Greg Ellingson as police chief,” Austin said. “I have no ill will toward Greg Ellingson, but that motion failed on a 2-1 vote. That left us with a discussion of how do we proceed, and we had an administrative structure in place. In that administrative structure we have an assistant chief that’s already gone to chief school, so it simply elevates our assistant chief to chief without having to have a vote or anything else.”

During the meeting, on the advice of City Attorney Joey Homans, the council removed Ellingson from the position, promoting Assistant Chief Casey Chastain to interim chief, effective immediately.

“He may be in that post for quite some time,” Austin said of Chastain. “I don’t know how Chief Krockum is going to respond to this council unanimously voting to reappoint him to his post as chief. That may not be an agreeable situation or may. That’s going to have to be a conversation that we have, and he’s going to have to ultimately make that decision.”

But it wasn’t simply their voices inside the meeting room that were heard, but cheers, jeers, boos and outcry from those gathered in the parking lot and watching the meeting on closed circuit.

“I think their voices have been heard loud and clear,” Austin said. The fact is, at one point in time I was told that there was no way that I would allow some of the things that were going on outside to occur inside. My response to that was simply I’m inside and they’re outside. I don’t have any way to control a crowd when there’s a wall and a door between us. I probably would have asked people to tone it down a notch or two or three. But you know what. This is what you get when you hinder people from having open, good government, so that had a right to be boisterous tonight. I applaud them for coming. They stood in a driving rainstorm and a severe thunderstorm as I understand it as well to stick with it tonight.”

“It is time for all of us to proceed with what the law tells us is our obligation to show these people out here, to show these residents, to show our customers the utmost loyalty, the diligence because we have accepted these offices of public trust!” Homans said loudly. “I decline the request that I resign.”

That resulted in loud cheers from those gathered outside the building.

Austin encouraged residents not to stop attending and being involved in their government in the weeks, months and years ahead.

Before voting to reinstate Krockum, both Davis and Hendrix said if the public still wants them to resign after taking that action, they would do so because they want the city to heal.

At the end of the meeting, Austin asked Simonds for her resignation.

“Those that were watching could tell that the tone of my voice outlined the weightiness of what I knew I was about to ask,” Austin said. “But with the things that have been said and the things that have been done, and the procedural matters that have not been followed, I could not let the moment go by without simply saying I don’t think that she has the ability to lead this organization anymore.”

Simonds asked to have until the close of business Wednesday, May 6, to decide.

“We’ve given her time to make that decision, and if she doesn’t want to resign then council may or may not take that up at their pleasure on another mechanism of remedy on that,” Austin said. “I think a lot of feelings have been hurt. A lot of individuals now doubt her ability to be able to lead this organization.”

“I think the city is in great, capable hands with Casey Chastain,” Austin said. “He has done nothing but serve this city quite capably and I’m honored that he’s willing to serve in this regard.”

Ellingson has continued to work for the city since he was removed from the chief’s position when Krockum was hired. He maintains POST certification.

Austin said Ellingson will continue to have a job with the city.

“Greg Ellingson has been a loyal employee of the City of Demorest for more years than I can count,” Austin said. “The position that he left when he was asked to become interim police chief is still available to him and I hope that he will continue to serve the citizens of Demorest.” 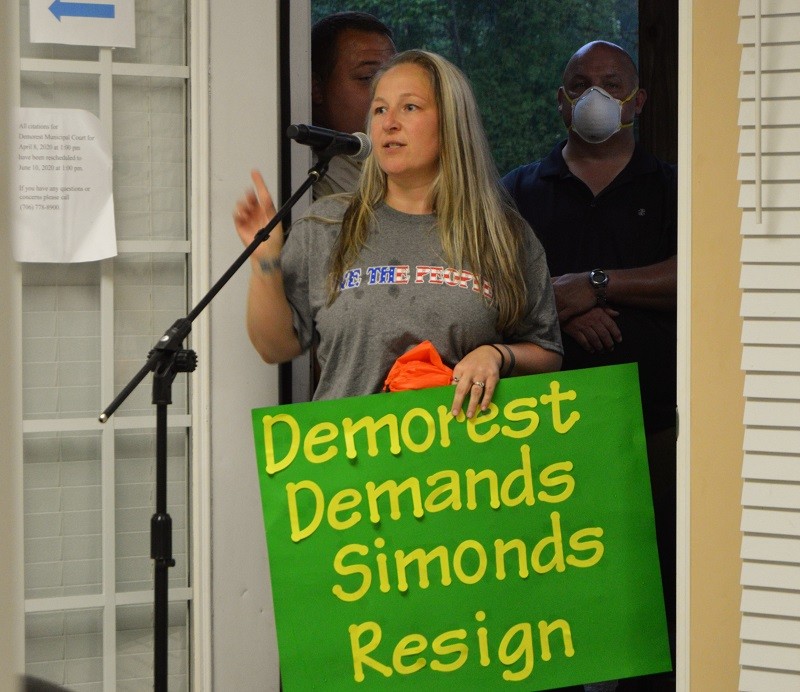 Cherri Hendrix addresses the Demorest City Council, questioning whether Councilman Nathan Davis resides in the city or at an address in the Fairview community. 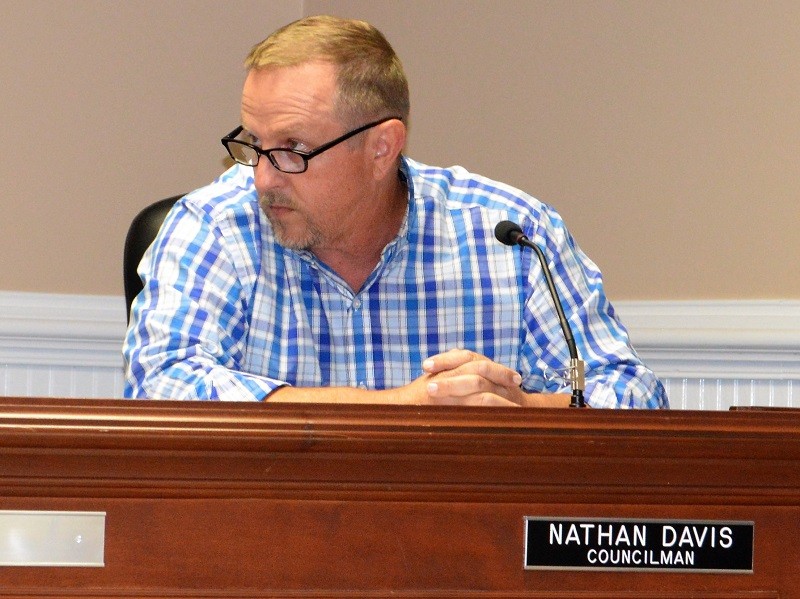 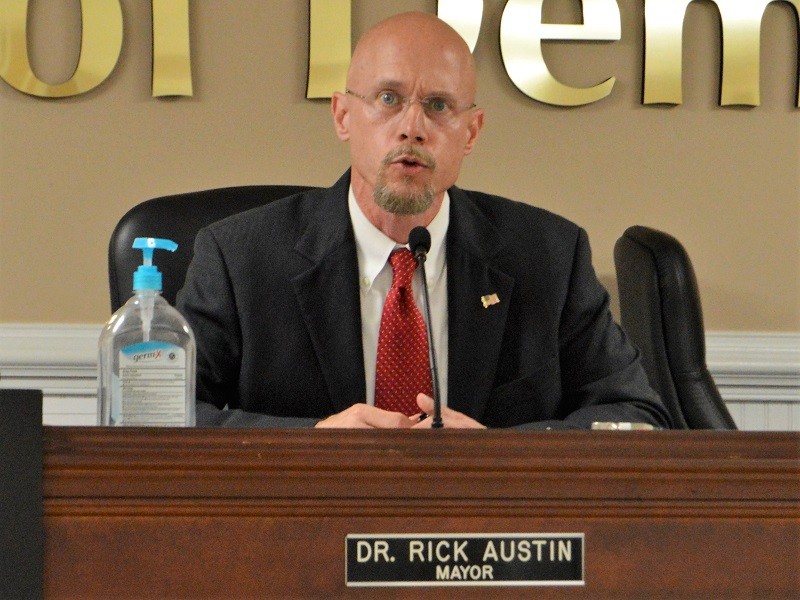 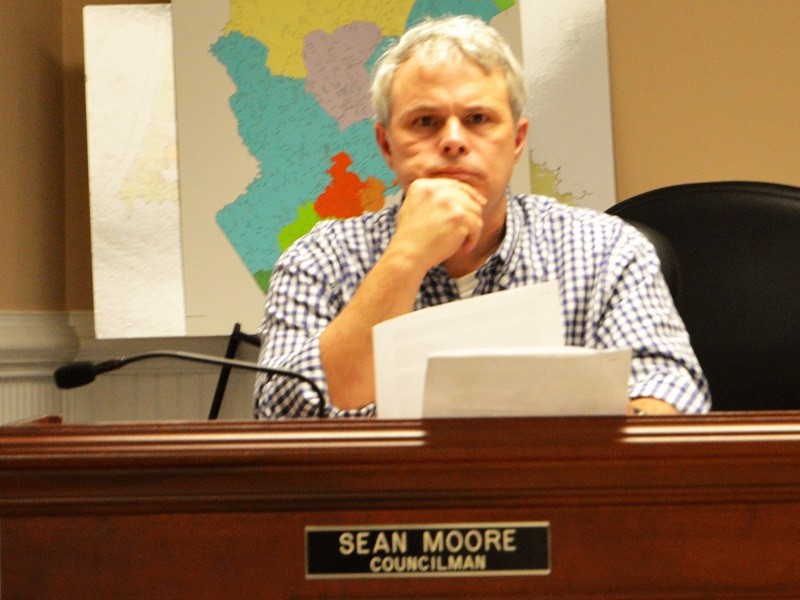 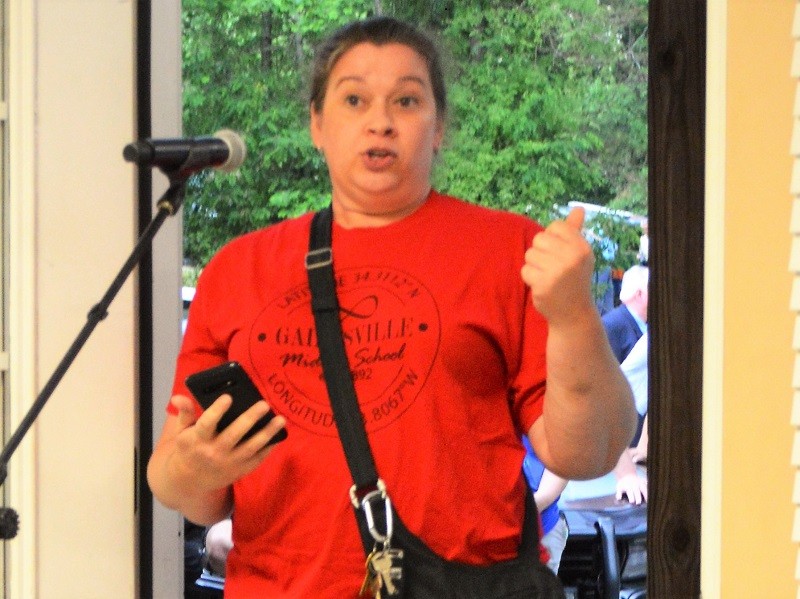 Demorest resident Sharla Gladden demands the resignations of Councilmen Nathan Davis and John Hendrix, and either the resignation or firing of City Manager Kim Simonds. 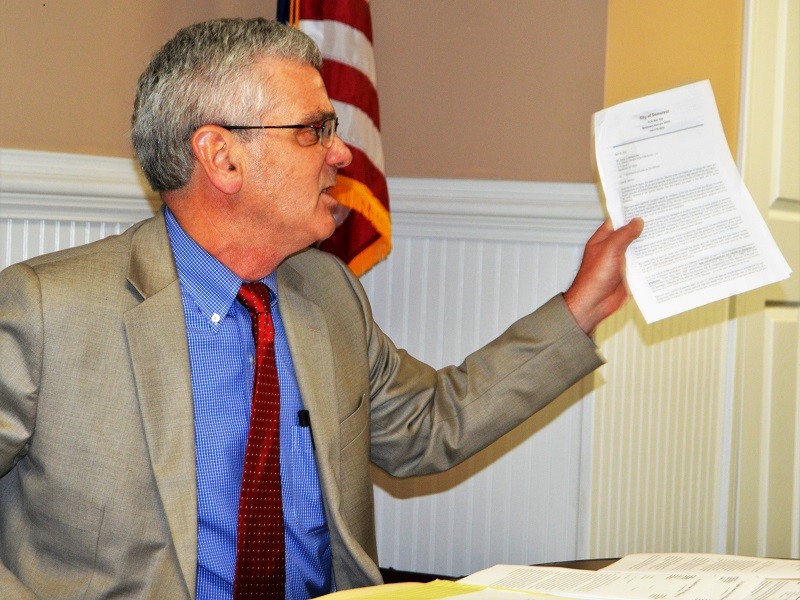 Demorest City Attorney Joey Homans responds to a letter from City Manager Kim Simonds asking him to resign, adamantly saying he is not resigning. 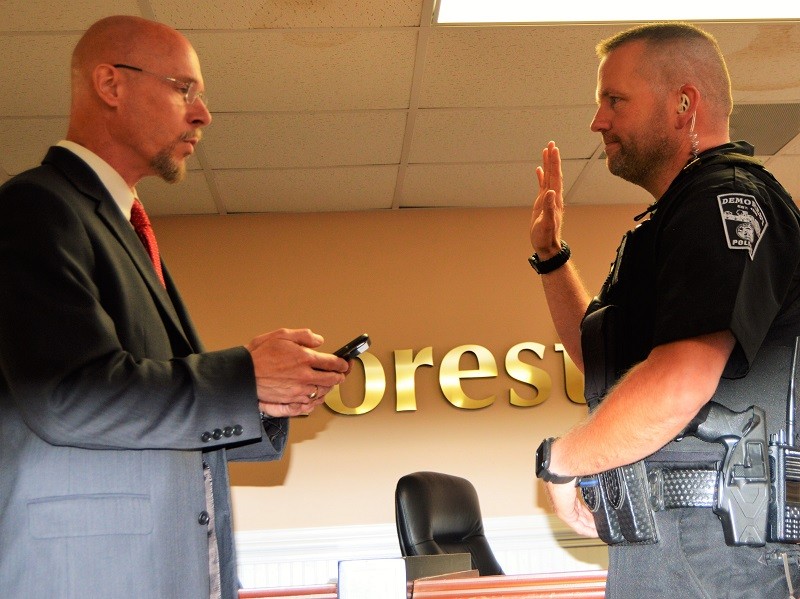 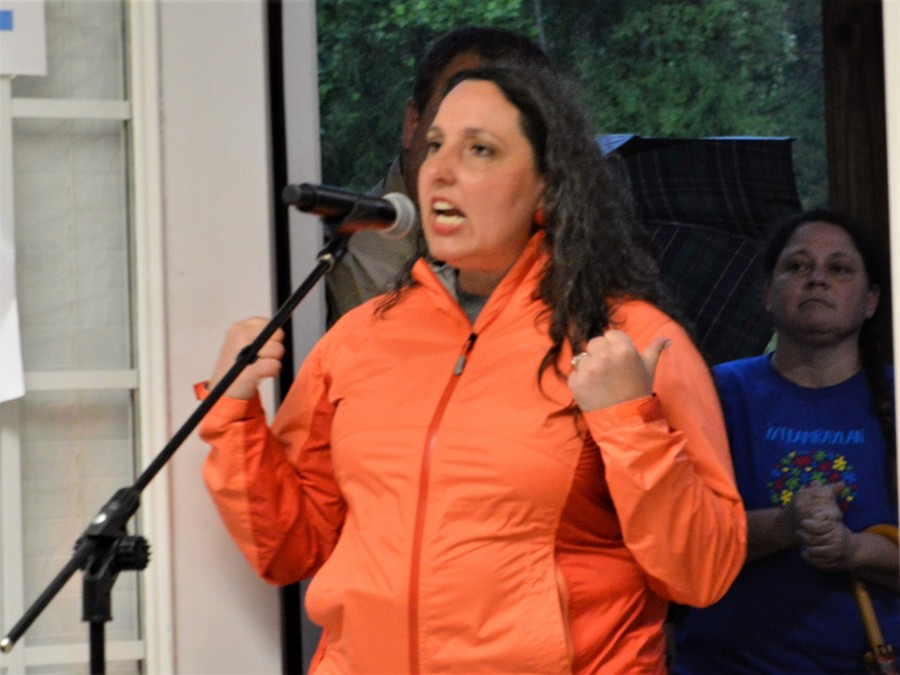 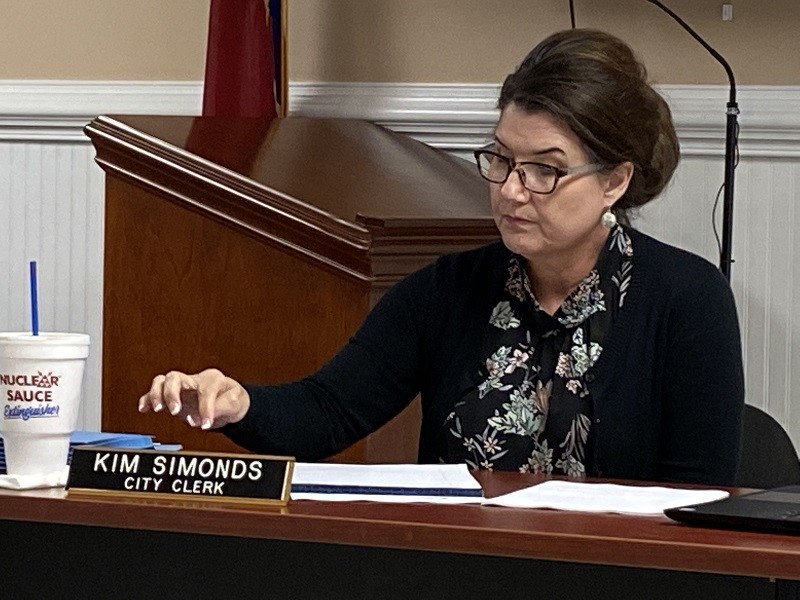 Demorest City Manager Kim Simonds has until the end of today, May 6, to respond to Mayor Rick Austin's call for her resignation. 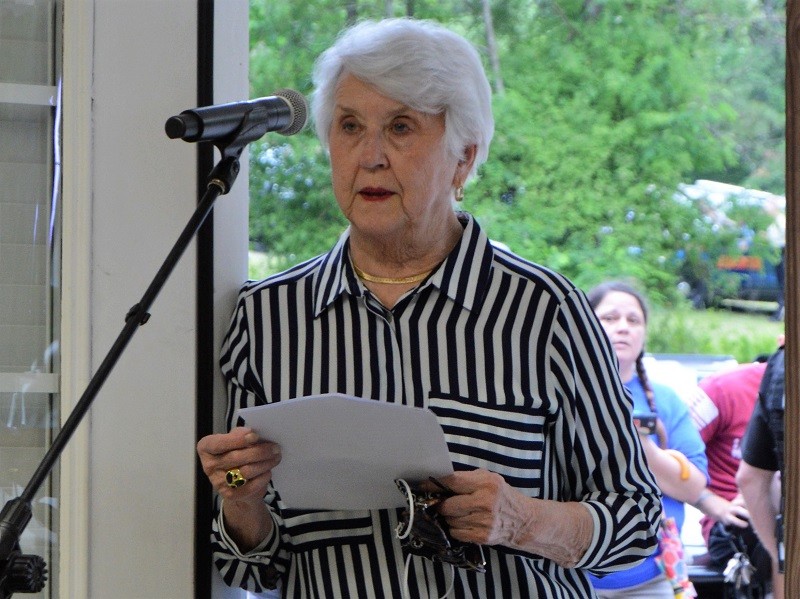 Immediate past Councilwoman Florence Wikle tells Councilmen Nathan Davis and John Hendrix if they do not resign she and others will begin the recall process. 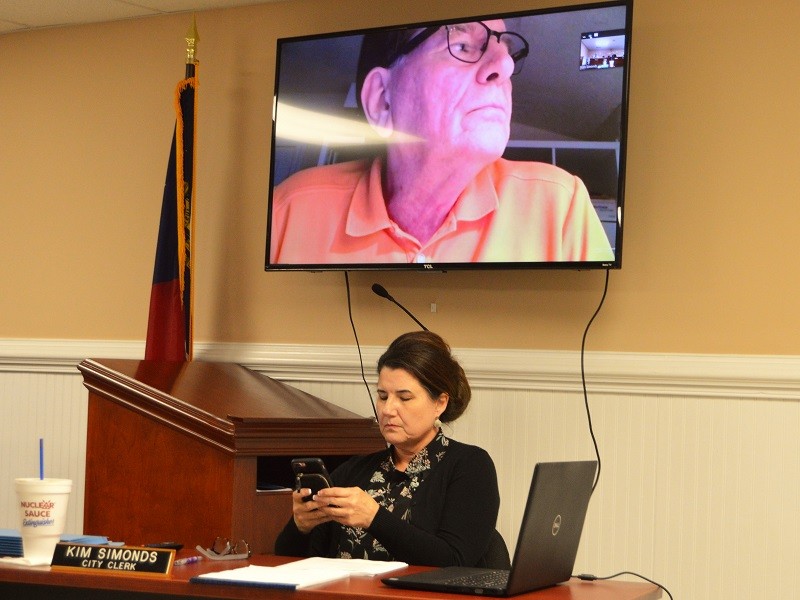 Demorest City Councilman John Hendrix, on screen behind City Manager Kim Simonds, attends Tuesday night's meeting by teleconference and later by telephone as the storm knocked out his video feed. 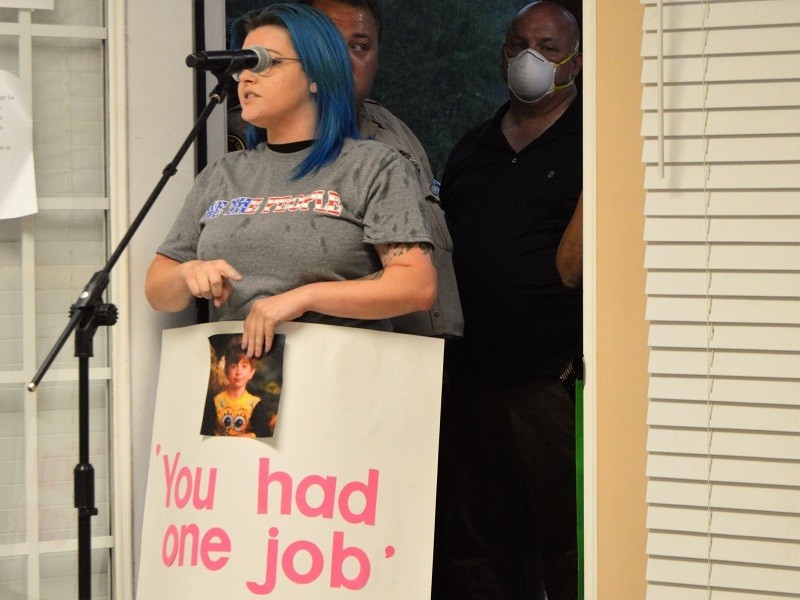 Lexi Dodson questions Demorest City Councilman Nathan Davis about whether he is a city resident, citing different addresses being included by him on different official documents.