Eagle Ranch founder to change roles as non-profit looks ahead

Eagle Ranch founder Eddie Staub announced at the non-profit's 35th anniversary dinner Sunday night that he will soon step down as Executive Director but remain in the role of Founder.

The change comes as the organization looks to the future by opening the James W. Webb Wings Center, a 10,000 square foot facility that will be located on the ranch's property in Chestnut Mountain. The center will serve several purposes: provide counseling to children and families who are not part of the ranch's residential program; house Eagle Ranch's Wings Initiative, which will counsel other children's programs and non-profits; and assist couples with marriage counseling and young ministers as they start in the field.

Staub said that the organization is looking for a new executive director to transition Eagle Ranch into the next chapter. Once this individual is named, Staub will step down from the director's duties and stay active as Founder.

Staub is a native of Alabama and moved to the south Hall County area in the 1980s with the vision of starting a place for children who are facing struggles and cannot remain in their home. Eagle Ranch opened as a boys' home in 1985 then started accepting girls in 2001. Each year the organization assists around 300 children.

The organization held a dinner at the Ramsey Conference Center at Lanier Tech to celebrate 35 years of serving the community. An estimated 500 people, including past and present board members, commemorated the milestone.

Sportscaster Ernie Johnson, Jr. delivered a keynote speech for the dinner and focused on two points: blackberry moments, or his term for life's special moments, and finding value in people. Johnson said Staub and Eagle Ranch staff have the ability to see value in the children that they serve.

Dinner attendees also heard from board members of Eagle Ranch and a testimonial from an Eagle Ranch graduate. Each spoke of the special work Eagle Ranch does in the community and how the non-profit as impacted their life for the better. 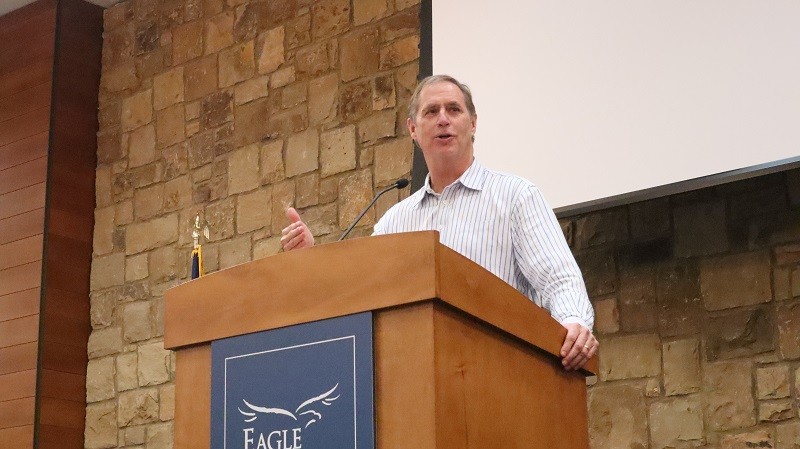 Eagle Ranch founder Eddie Staub announced at the non-profit's 35th anniversary dinner Sunday night that he will soon step away from the Executive Director role but remain active in the organization. The decision comes as the non-profit looks forward to the next chapter.