MACON — You can bet Class 5A will be more than ready to see Buford move up a classification beginning next season.

The Lady Wolves completed a perfect four-year run through 5A Friday night with a thrilling 66-63 win over Kell in the state championship game at The Macon Centreplex.

It was the fourth consecutive Class 5A title and gave Buford a perfect 70-0 record against the classification since joining in the 2016-17 season. It also was a first for any Buford girls class to win four consecutive basketball titles.

Buford is moving to Class 6A next season.

“That’s an amazing feat (about the record) but I really think it’s more because of the non-region schedule we play than anything else,” Buford coach Gene Durden said. “I’m just so happy for the two seniors -- Tate Walters and Katelyn Klein -- to be able to finish their careers like this.”

It didn’t come easily by any stretch. In fact, of the now eight titles claimed by the Lady Wolves under Durden, this one was by far the toughest. Kell (32-1) overcame an early deficit, rallied to take an eight-point lead in the first half, and then stormed back with a tenacious fourth-quarter rally fueled by freshman Crystal Henderson.

The eight-point deficit at 36-28 following a 16-0 burst by the Lady Longhorns in the second quarter was the biggest for the Lady Wolves in the 2020 playoffs. However, there was little panic from the Buford bench.

“We trailed Holy Innocents, who won the Class A Private title, by 18 earlier this year and came back to win that one so I think the girls understood what they needed to do and didn’t panic,” Durden said.

Henderson, however, nearly single-handedly spoiled Buford’s swan-song in Class 5A. The quick, wiry guard poured in a game-high 26 points, including 16 in the fourth quarter and 22 in the second half, to keep the Lady Longhorns within striking distance. She hit a pair of huge 3-pointers and three free throws after being fouled on another attempt in the final two minutes. Her desperation 3-pointer at the buzzer to send it to overtime just missed wide left.

“We did everything we could to try and contain her but she hit some big shots,” Durden said of Henderson. “But our girls also made some huge plays at the end.”

Klein and Walters hit 5-of-6 free throws over the final 2:02 of the game to help keep it a two-possession game. Klein also had a huge offensive rebound off an Ashyia Willis miss in the final minute.

Walters led Buford with 18 points while Klein added 9 in their final games. Willis had 13 points and Blair Wallis 12 for the Lady Wolves.

But it was billed as a battle of defensive behemoths who like to press early and often and it more than lived up to the hype. Buford won the battle of presses forcing 24 Kell turnovers to create 34 points. The Lady Longhorns forced just 10 Buford miscues for 9 points.

But when Kell managed to break through, Henderson and fellow guard Makyah Favors, who finished with 10 points, all in the first half, found seams

The two teams jockeyed back-and-forth right from the opening tip. Buford forced five quick Kell turnovers to run out to a 10-3 lead in the first three minutes. Four different Lady Wolves scored as Wallis hit a 3-pointer for the early big lead.

But the Lady Longhorns turned up their defensive press forcing three Buford miscues to tie the game at 10 before the Lady Wolves closed out the first period with a 6-0 run.

A pair of Willis free throws pushed Buford’s lead to 18-10 in the opening moments of the second quarter. But Kell again answered behind its defense.

Five Buford turnovers helped spark what would eventually become a 16-0 run in just over two minutes behind a pair of Favors 3-pointers and capped by a Henderson steal and layup for a 26-18 lead.

That represented the largest deficit for Buford in the 2020 playoffs. The Lady Wolves responded. Walters drained two free throws and a basket, Willis converted a three-point play, and Klein hit two free throws and got a stick-back basket in the final minute to eventually pull Buford into a 29-29 tie heading into the intermission.

The key, however, may have been an 18-10 Buford run to open the third quarter to give the Lady Wolves a 47-39 cushion. They never trailed again, though Kell pulled within 50-48 at the end of the third quarter.

“I really thought the way we came out to start the third quarter was the difference,” Durden said. “The girls just did a great job of executing.”

While the thrilling finish may have caused more than a few frayed nerves among Buford fans, Durden said he enjoyed the moment.

“I love games like those,” he said. “It keeps you sharp as a coach and a player and is a lot of fun to be a part of. It was a great high school game.” 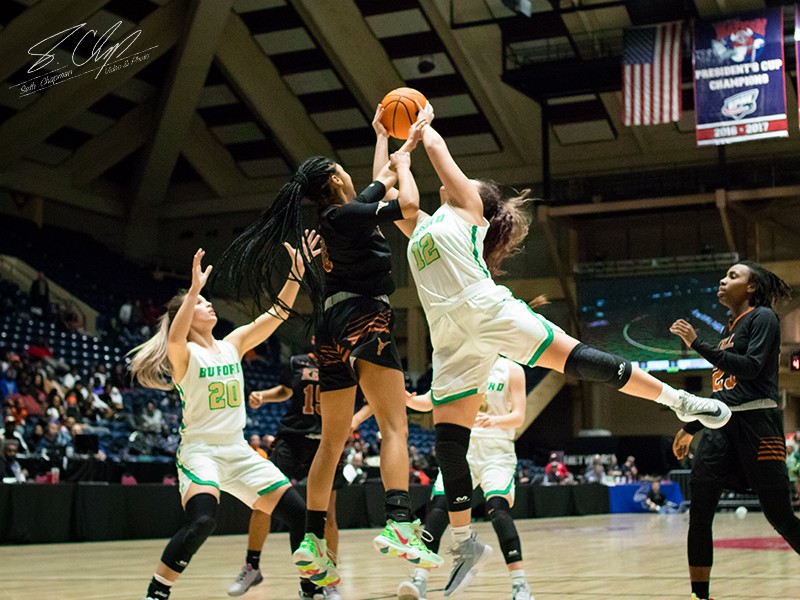 Buford senior Katleyn Klein goes up for a rebound during the lady Wolves' thrilling 66-63 win over Kell Friday at The Macon Cebtreplex to win their fourth consecutive Class 5A state championship. 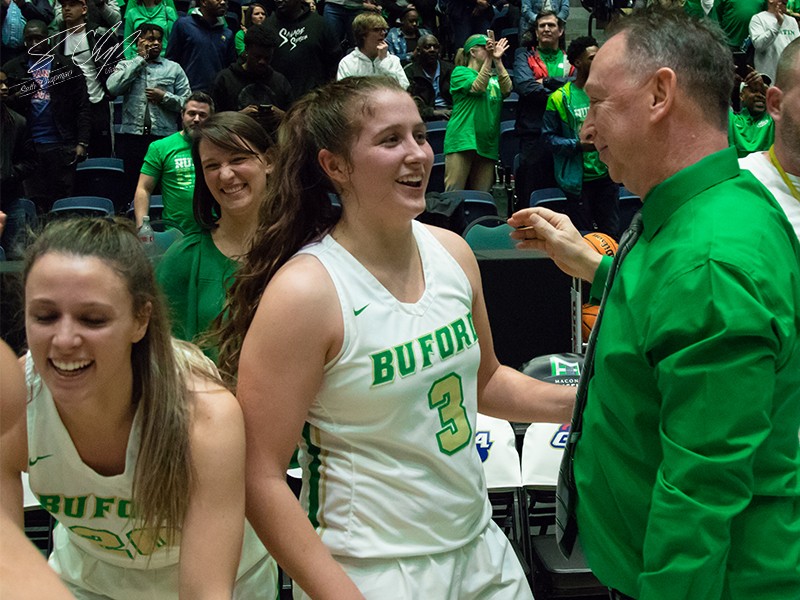