GAINESVILLE — It’s still plenty early in the 2020 baseball season, but any expected drop off for North Hall, which graduated several key cogs from last year’s Class 3A semifinal group, may be premature.

North Hall got solid pitching, played near-flawless in the field, and got more than enough timely hitting in taking a 10-0 and 9-1 sweep of White County Friday at Cottrell Field.

Jackson Dyer tossed a complete game, six-inning 1-hitter in the first game and Wes Tadman and Zach Warwick combined on a 4-hitter in the second game. They walked just three in the doubleheader.  The Trojans committed just two errors in the field and banged out 14 hits but also used three sacrifice flies to drive in runs in the second game. They also took advantage of nearly everyone of the Warriors eight errors on the day.

“At this time of the season pitching is usually ahead of hitting and I think that’s where we are,” North Hall coach Trevor Flow said. “I like how we played defense and I thought the guys on the mound did a great job of throwing strikes. We need guys like Zach, and that was his first time on the mound this year, to step up.

“We still need a little better approach at the plate but we also did a lot of the little things in key moments. We took advantage of their miscues. A pretty good effort overall.”

North Hall (4-1) will play host to West Hall on Saturday at Cottrell Field in a doubleheader. First pitch is slated for 1 p.m.

White County (1-3) will travel to Rabun County on Saturday.

North Hall was poised to blow the game open quickly against White County starter Connor McGuire. Jackson Dyer and Wes Tadman both walked to lead off the first and Jaret Bales followed with a bloop single to right. But Sargent fanned Tyler Brooks, got Brad Puryear to lineout to second, and Jay Johnson was robbed of two RBIs when the Warriors’ Jake Johnson made a diving catch to get McGuire out of the jam.

Meanwhile, Jackson retired 15 of the first 16 White County batters, giving up only a two-out, first inning walk to Johnson. Jackson finished with a 1-hitter while fanning four and walking just one.

The Trojans did break through in the second again loading the bases. But a Tadman RBI groundout scoring Jace Bowen for a 1-0 lead was all they could get as they left two more runners on base.

North Hall kept the pressure on the third as Tyler Brooks was hit by a pitch and later scored on an infield hit from Jay Johnson. They plated four more in the fourth on two hits, including a two-run single by Johnson, an error, and a wild pitch for a 6-0 lead.

The Warriors broke Dyer’s no-hit bid when Caleb Reddy singled to left to open the top of the sixth. Rylee Higgins reached on an error but Dyer got out of the jam with a strikeout and a double-play liner to third.

The Trojans then put the game away with a 4-run bottom of the inning, highlighted by RBI singles from Jace Bowen and Zack Warwick to invoke the Mercy Rule.

North Hall got the early 1-0 lead in the first when Jay Johnson walked, moved to second on an errant pickoff throw, and scored on a White County  error.

The Warriors tried to answer in the second when Riley Norton walked and Sargent followed with a single. But Tadman got out of the inning with a fielder’s choice at third, a groundout, and a flyout to left.

The Trojans increased the lead to 4-0 in the second on a two-RBI single from Bowen, who then scored on a crazy sacrifice fly from Tate Brooks on a pop out to the catcher. Bowen tagged and beat the defense to the plate.

White County got a run back in the third when Kyler Mayo reached on a fielder’s choice and eventually came around to score on a wild pitch.

North Hall answered right back in the bottom of the third. Patterson walked the bases loaded and was replaced by Reddy. North Hall scored all three runs without a hit getting sacrifice flies from Caden Bales and Tate Brooks sandwiched around a RBI from Bowen, who reached on a White County error, to push the lead to 9-1.

Zach Warwick took over for Tadman in the fifth and scattered two hits over three innings to earn the save in his season debut on the mound. 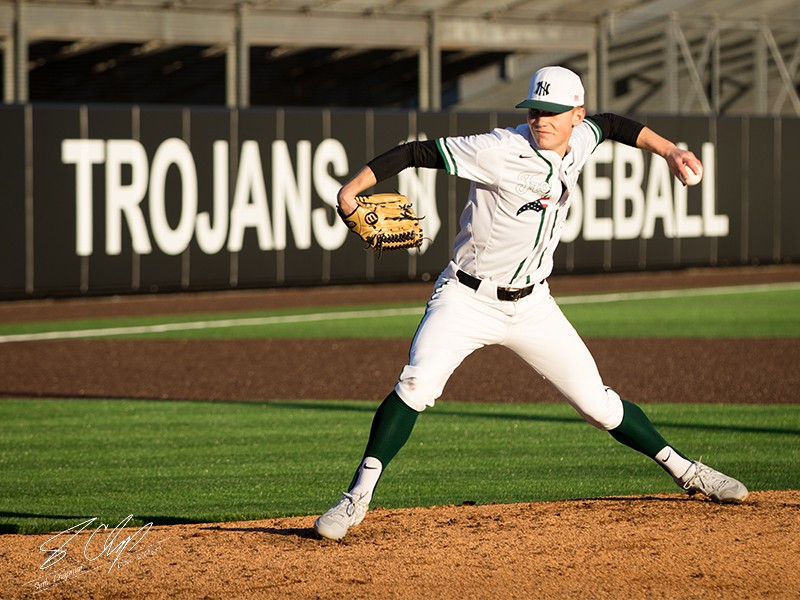