The new JTG Daugherty Racing driver won the Daytona 500 pole position Sunday in his first official outing with the team and is coming off a celebratory media blitz earlier this week.

Although he drove the car, Stenhouse was insistent during a Daytona 500 media day question-and-answer period that his good fortune on the grid was primarily a result of the JTG Daugherty Racing team – more preparation than driver skill on the single lap qualifying run in the No. 47 Chevrolet.

“It’s been really neat so far,” Stenhouse said of the one-of-a-kind media tour the Daytona 500 pole winner is treated to in the wake of his work.

“As soon as I won the pole, we were like, ‘Hey, we’re going to fly out at 6 o’clock and to go to New York,’ and they were gracious enough to let me push that time back so I could go to the dirt track (Volusia Speedway) and watch my sprint car team run, and then we headed to New York.

“But getting up in the morning and going to FOX and doing all the shows and then all the interviews in between is just pretty cool to see everybody talking about our race team and what we were able to accomplish on Sunday.”

“A lot of hard work went into that this offseason,” Stenhouse stressed. “A lot of Saturdays, long nights in the shop, long days in the wind tunnel, and to see it all kind of come together, pay off and get to see all the media that our team was able to get is pretty special. I got to enjoy it for a week, or we get to enjoy that for a week before the race on Sunday, so it’s a big deal for our team.”

The pole was Stenhouse’s third in eight full-time seasons; the first since the two-time Xfinity Series champion won the Talladega Superspeedway NASCAR Cup Series race from the pole in 2017. It’s also the third pole position for the JTG Daugherty team and first since 2015 when A.J. Allmendinger topped qualifying at both road course events (Sonoma and Watkins Glen).

Stenhouse conceded he has plenty of motivation to make good on this prime starting position – especially starting the 2020 season with a new team – but with a familiar crew chief in Brian Pattie, who worked with Stenhouse at Roush-Fenway Racing from 2017-2019. Neither considers the performance at Daytona last weekend to be a surprise effort considering their track record together, particularly on superspeedways, where Stenhouse has earned both career wins.

“I know about (calling the pole position) an upset,” Stenhouse said. “Brian and I together have shown what we can do on speedways. I think it shows the work that the team put in and the resources that we have to come down here and be the fastest car in Daytona 500 pole qualifying.

“So I wouldn’t say it would be an upset. I don’t know how you’d put it, but I feel confident. Maybe an eye-opener, but I am confident in what our ability is and our race car, especially here at Daytona.”

The Toyotas may be outnumbered, but they’ll be working together as usual in Sunday’s Daytona 500, says Sunoco Rookie of the Year contender Christopher Bell, driver of the No. 95 Leavine Family Racing Camry.

“I’m sure we’ll talk about that later on in the week,” who posted the ninth-fastest lap in last Sunday’s time trials for the Great American Race. “But it’s tough because we’re outnumbered so bad, it’s hard to think all the Toyotas are going to be able to compete against all that Ford and Chevrolet have.”

On the other hand, even with just five factory-backed teams, Toyota drivers have excelled in NASCAR’s most prestigious race. In both of Denny Hamlin’s Daytona 500 victories, Toyota Camrys have swept the top three positions.

“Whenever you get down to the end of it, it’s totally different,” Bell said. “Typically, a lot of crashes have taken a lot of cars out. You have to look around and see what’s left. Yeah, I would imagine we’re going to do everything we can to help each other.”

Bell has focused on the upcoming Daytona 500 at the expense of dirt racing plans in the week preceding the race. He forewent a World of Outlaws appearance at Volusia Speedway on Sunday and Sprint Car races at East Bay in Tampa the following two days to concentrate on preparation for his NASCAR Cup Series debut.

Also contributing to his decision was a violent wreck during midget competition at Western Springs in Auckland, New Zealand, in December.

“I was originally planning on running Volusia, East Bay, East Bay,” Bell said. “When I started looking at the details of it, I’m like, ‘Man, this is my first Cup race weekend. I really need to focus on that.’ I just decided to skip Florida. Unfortunately, the dirt racing doesn’t really start again until later on in the year. You’ll be able to hopefully catch me in a car Easter weekend (the first Cup ‘off’ week).”

Bell said he didn’t feel pressure from his team in making the schedule change. Rather, the impetus came from within.

“The last that I talked to the team about it, they were giving me approval to go do it,” Bell said. “But I felt like I owed it to them to show them that this is my job, and I am solely focused on the Daytona 500, starting my Cup season out right.

When Martin Truex, Jr. started working with engineer James Small at Furniture Row Racing, the biggest obstacle to their communication might well have been Small’s Australian accent.

When Truex transitioned to Joe Gibbs Racing in 2018, Small came with him. Last year the Aussie served as lead engineer on a No. 19 team that won seven races, tops in the NASCAR Cup Series.

With the departure of crew chief Cole Pearn during the offseason, Small has assumed that role on Truex’s team. So far, the transition has been comfortable, as far as the driver is concerned

“So far it’s been good,” Truex said on Wednesday during Daytona 500 media day interviews. “I think James has been right there on the front lines with us the past few seasons, and obviously he wasn’t out in the spotlight, because he was an engineer and not a crew chief.

“But I feel like he’s really doing the same things as before, and our communication really hasn’t changed a whole lot. I just feel like it’s business as usual. From that standpoint, it feels comfortable, and he’s done a good job of just keeping things the way we’ve always done them. Not trying to change, not trying to be somebody… change the team up to be the way he wants it.

“He knows what we have works, and his approach is so similar to Cole’s that it’s really been seamless so far. Hopefully, that continues to be the case.”

Brad Keselowski Is Tight Lipped About Discussion With Joey Logano

Brad Keselowski’s feelings about blocking in restrictor-plate races are well known, and the driver of the No. 2 Team Penske Ford didn’t hold back after teammate Joey Logano threw a block on Kyle Busch in turn 4 during last Sunday’s Busch Clash at Daytona.

Contact from Busch’s Toyota turned Logano sideways and ignited a six-car wreck that eliminated Keselowski, an innocent victim of the melee. Keselowski subsequently characterized Logano’s block as “dumb” and didn’t walk back his opinion during Wednesday’s Daytona 500 media day interviews, even though he and Logano discussed the incident after the fact.

“I think I’ve been pretty consistent and verbal about the blocking on the race track, so I don’t really have anything that I feel differently about with respect to that,” Keselowski said on Wednesday during Daytona 500 media day at Daytona International Speedway. “As far as the comments specific to Joey, I’ll keep those between him and I.”

Keselowski is in a contract year at Team Penske, and he enters the season with new crew chief Jeremy Bullins after a personnel shakeup within the organization. From Keselowski’s point of view, those issues haven’t elevated the stress level to an appreciable degree.

What grated on the 2012 NASCAR Cup Series champion was having a car wrecked in a race he thought he could win.

“I’m probably a little bit stuck in the forest to see it from the trees, but with respect to that, I hate losing races that I feel like we were in position to win, so I hope that never changes regardless of team dynamics, contract dynamics and so forth,” Keselowski said.

“I think most people would tell you that’s a good thing that you want to win and you hate losing, so certainly we were in position to win that race, and I’m proud of that and we weren’t able to capitalize on it through no fault of our own, which is frustrating—whether it’s here or anywhere else.”

*Locked into the Daytona 500 front row 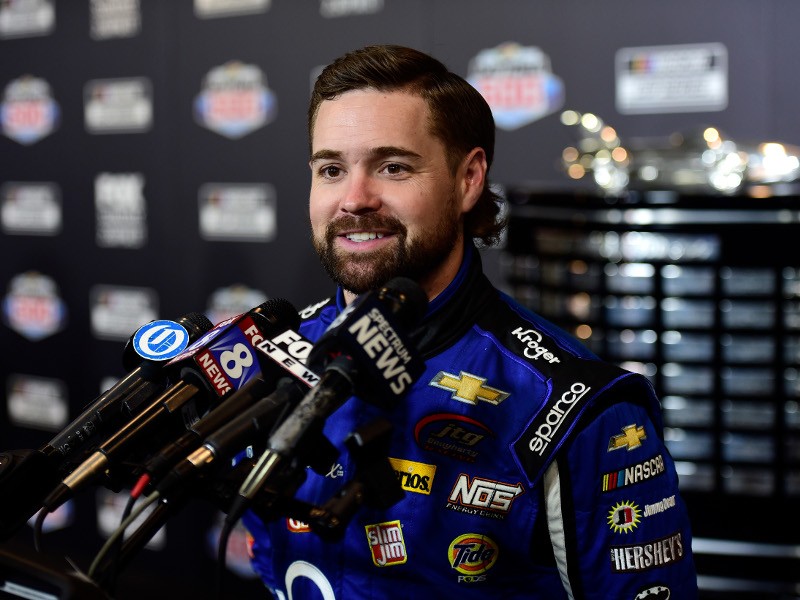