For ten years, local man has encouraged children to give kindness at Christmas during annual appearances as Santa

For ten Christmas seasons, David Lovern has donned a red suit, white beard and “the spirit of Santa” to greet children and their families during appearances as the Big Man himself.

Each year, Lovern makes appearances on weekends in December at Sackett’s Western Wear in Jasper, Georgia, which is also Lovern’s hometown. Lovern said that in order to make sure he looks the part, he visits a special hairstylist in Alpharetta around Thanksgiving to have his hair and beard bleached snowy white.

“It’s a pretty intense process and the person doing it needs to really know what they’re doing or it just doesn’t work out,” said Lovern.

Lovern added that the hairstylist responsible for transforming him into Santa Claus also helps many other “Santas” look their best, too.

“At any given day when you go through there, especially from mid-November on, there will be anywhere from, I think, five Santas is as many as she’ll do [at a time],” said Lovern. “It’s a pretty exciting day being in there with four more Santas and everybody talking and laughing and talking about their experiences.”

Lovern said that he also owns two Santa suits, one that he ordered from an online shop that designs professional Santa suits and another that was tailor-made for him as a backup.

While each actor filling the boots of Santa Claus may look and sound a little different, Lovern said that each one he knows, including himself, have something in common. He calls it the “spirt of Santa”.

“When you put on your Santa suit, you put on the spirit of Santa,” said Lovern. “You have a spirit of kindness, of joy and of understanding for children…so it’s not just about putting on a suit and having a white beard, you have to have that Santa spirit and have kindness in your heart when you’re talking with children.”

Lovern said that this “Santa spirit” is also evident when each Santa talks to children.

“Most of the Santas that I know are strong in their Christian faith, so they all try to impart a kindness and joy to the children, a spirit of the season, and try to make it known that it’s not just about toys and monetary things, but it is about the birth of Christ and the joy of family,” said Lovern.

Lovern explained that his Santa appearances started in 2009 with his granddaughter’s first Christmas. She was born with a congenital heart defect and, due to her increased risk of infection, had to be kept inside among close family and friends.

“[My granddaughter] could not be around any other children right after her open heart surgery as a baby and no other Santas could hold her because they had held other children,” said Lovern. “My daughter was very upset, and I said, ‘Well, it just so happens that I know a lady that can make a beard white and I can get a Santa suit and I will be your Santa!’”

Once pictures of Lovern dressed as Santa with his grandchildren circulated on social media, the requests for appearances started pouring in. Along with his annual appearances at Sackett’s, Lovern attends local church programs, breakfast with Santa events and even visits local nursing homes.

But Lovern doesn’t go to these events alone, his wife Sheila started dressing up as Mrs. Claus and joining him during appearances around seven years ago.

While Lovern admitted that his wife isn’t quite as enthusiastic as he is when it comes to dressing up, her attendance often works in the couple’s favor when it comes to greeting young children.

Lovern said that this year, he and his wife have mainly limited their appearances dressed as Santa and Mrs. Claus to the December weekends at Sackett’s. Rather than letting the children sit in their lap, the couple sit in the back of a red sleigh placed at the front of the store while the children and families sit in the front to allow social distancing.

Lovern said that the sleigh might take away from his interaction with the children, but overall has been huge success. He said there have been several nights where Santa and Mrs. Claus have stayed at the store long after closing time to allow every child a chance to talk to them.

“For the children, they LOVE the sleigh, it’s like a child getting in their new playground!” Lovern exclaimed. “It doesn’t really seem to bother the children as much as it does Santa and Mrs. Claus!”

Seeing the joy on the children’s faces is what Lovern said is his favorite part about dressing up and making appearances as a jolly old elf.

“When you see the children in line and they’re waiting to see you, and they have happiest smiles on their faces, they’re so excited and you can just feel them bubbled over with excitement waiting to see you…just the joy of the children when they see you is probably one of the most exciting parts of it,” said Lovern.

Lovern said that he plans to keep making his annual appearances for years to come because of how much joy it brings him. He said that he also uses his appearances as an opportunity to tell children about the birth of Christ and to encourage them to be kind to one another.

“We always try to say something to the kids about even if you don’t have money, even if you don’t have a lot of things you can give, kindness is free, you can always be kind to your family, your friends, and people you know,” said Lovern. “We try to strive to make it a point that it’s a joyous time of the year and we all have something that we can offer to our friends and family.”

UPDATE: The Loverns have finished up their Santa and Mrs. Claus appearances for 2020, but would like to wish everyone a Merry Christmas! 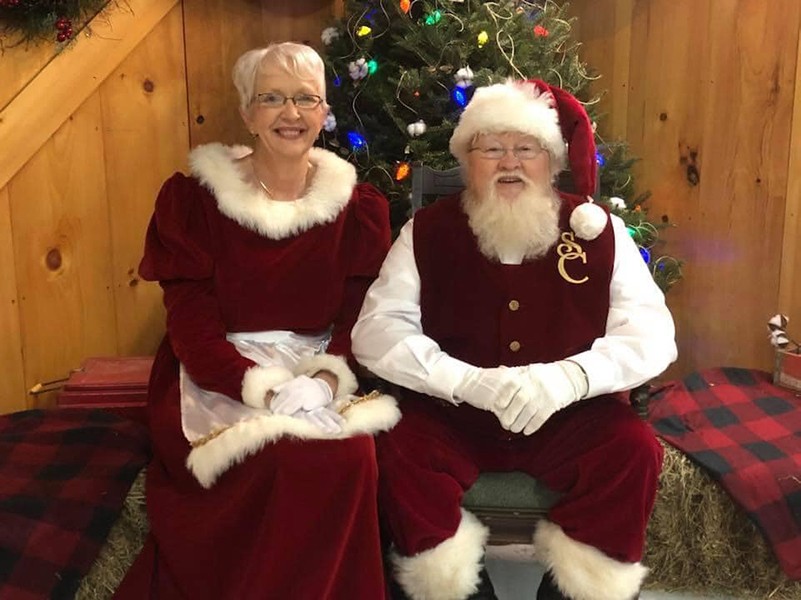 David Lovern has been making appearances as Santa Claus for a decade. His wife, Sheila, joined him dressed up as Mrs. Claus around seven years ago. (Photo credit: Rachel Gravitt)