Ralph Collins celebrated his 95th birthday in June of this year. But come New Year’s Eve, Collins will celebrate another grand milestone - 75 years since he left the U.S. Army after two years of service during World War II.

Collins is very humble about his time in as a part of the 41sr Armored Infantry Division from September 21, 1943 through December 31, 1945 in the European Theater.

Sitting in the living room of his Gainesville home, surrounded by dozens of photos of he and his family from over the years and holding hands with his wife of 73 years, Mildred, Collins meekly summarizes his time in the army by saying, “If I had to do it over with, I’d wanna do the same thing.”

But Collins has plenty of medals that attest to his heroism. There’s the Purple Heart Medal, awarded to Collins after he was wounded by an enemy grenade during a battle in France. Then there’s the Good Conduct Medal and the Sharpshooter Medal; the latter he received after completing the proper training at Fort Wheeler in Macon.

These three medals are in addition to the World War II Victory Medal, VAMET Service Medal and Distinguished Unit Badge. Collins keeps each of his medals, badges and awards with his honorable discharge papers, original photos and even letters written to Mildred while he was away.

Collins was born Marion Ralph Collins in New Holland on June 27, 1925. Collins said that he grew up in New Holland until the age of 15, at which point his family moved out into the “country”- down what is currently Highway 129 near Barrett Road.

At the mention of his sweetheart’s name, Collins reaches over to kiss her on the cheek, then tells of how he used to go play with her brothers, as well as spend time with her.

“She had some brothers, I’d go up there and play with them, but I knew I’d get to see Mildred!” Collins said, chuckling.

Collins said he was learning how to weld at a shipyard in Brunswick in when he got a letter from home telling him that he had been drafted. He was only 18-years-old when he reported for duty at Fort Wheeler in Macon, then shipped out of Maryland with his unit to England.

Collins was assigned to Company H of the 2nd Armored Division, often referred to as Hell on Wheels. His unit wasn’t in England long before they moved toward France.

Collins said his unit landed in France three days after D-Day, or the Allied troops invasion of France on the beaches of Normandy. He recalls pieces of his time in France, including sleeping on a beach one night before continuing on with their mission.

“To go over to France, we slept on a beach one night,” said Collins. “I don’t know why we didn’t go on, but they wanted to sleep on the beach that night then we went on the next morning.”

Collins said that he can remember seeing the people of France wave to him and his unit as they marched forward, happy to see the Allied forces arrive. In addition, he can recall spending his nineteenth birthday sitting in a foxhole.

“[The foxhole] was roughly four feet deep and we could stand up and see out to actually shoot at anybody if we had to,” said Collins. “We slept in that hole but that was alright.”

From August 9 through 14 1944, Collins’s unit was a part of fierce battle in France. While Company H was eventually victorious in this battle, Collins was wounded when hit in the back by shrapnel from an exploding enemy hand grenade.

Collins recovered in a hospital in England but still has the scars on his back from the shrapnel. He was awarded the Purple Heart Medal for his wounds while his unit received a citation as well as the Distinguished Unit Badge for their perseverance and victory in the battle.

Part of the citation, which came from the army after Collins returned home, reads:

“Company H, as part of a large force, successfully reached its objective on 9 August 1944 after bitter fighting and prepared to defend its strategically located hill position. Shortly before midnight, the enemy launched a vicious counterattack in battalion strength against Company H positions, preceded by devastating artillery and mortar fire…When the enemy reached a point less than 20 yards from Company H positions, the gallant and courageous men routed the large hostile force from the area in vigorous hand-to-hand and bayonet fighting…Handicapped by poor visibility, because of dense growth of brush and vegetation, lack of proper food and rest and ever mounting casualties, Company H steadfastly held its key terrain feature against strong forces, preventing the enemy from breaking out of a thinly held Allied trap. The indomitable fighting spirit denied a vital area to the enemy which contained the main Allied line of communication and supply routes for the break-through operations in the heart of France…”

There are plenty more stories from Collins’s time in the service that he can recall and many he has passed on to his daughter, Cherylin Woodruff.

Woodruff said that Collins has told her stories of the camaraderie between himself and his fellow service members, including the time they were playing baseball during some downtime in France and Collins broke his nose when he was hit by a fly ball.

In addition, Collins told Woodruff that at one point he boarded with a French family, and, of course, there’s the story of the French citizens waving to the American troops.

“They were so excited because they knew the soldiers had come to defend them,” said Woodruff.

One story that really stands out to Woodruff involves a silver cuff bracelet made for Collins by a German prisoner of war. Woodruff said that the prisoner used spare parts from an airplane to form the bracelet, then engraved “Collins” in the middle and “France” and “1945” on the left and right side, respectively. In addition, the prisoner used a nail to make tiny dots in the metal for detail.

Woodruff said that her dad told her he had tried to ask the prisoner for a plate to go at the end of Collins’s bed, but a lack of understanding between the two men who spoke different languages resulted in Collins getting a bracelet instead.

Collins held on to the bracelet throughout the remainder of the war, in fact, it stays in the box with all of his medals and mementos. Woodruff said that her mother would frequently wear the bracelet once Collins returned home.

“It’s incredible because it fits on mother’s arm and mother apparently did wear it quite a bit,” said Woodruff.

Collins said that he doesn’t remember where he was on May 8, 1945 when the war in Europe officially ended, but he does remember that he was still stationed in France when the war in the Pacific ended three months later.

When asked how he felt about the war ending, Collins said he was happy “because you don’t want to be fighting all the time.”

Collins was honorably discharged and arrived home in Georgia on New Year’s Eve 1945. He said that he can remember spending that night catching up with his dad and brothers, when he reminded them that they probably needed to go to bed because of the late hour.

But he said that his dad told him, “We don’t have to go to work tomorrow, it’s New Year’s Day!”

Ralph and Mildred married on September 2, 1947, nearly two years after he came home from the war. Collins attended GI school so he could learn more about welding, then moved his family moved to Thomaston for work.

The Collins family moved around a little bit more before they settled back down in Gainesville. Once they made Gainesville their permanent home, Ralph and Mildred got more involved at Oak Grove Baptist Church.

The couple took up the responsibility of driving the church van, which would pick up children in the community and shuttle them to services on Wednesday and Sunday.

The two were faithful in their service to the church; they drove the van for more than fifty years with the only break being when Ralph had major surgery in the 1990s. Woodruff said that the children of the church were so distraught not to see her dad that he begged the doctor to let him resume his driving.

Eventually, the doctor relented, although he only permitted Collins to drive twice a week, and only within 5 miles of home.

Collins has participated and been recognized in many local memorial services and parades throughout the years, as well. Woodruff said that one of her favorites is the Sugar Hill Elementary service in 2017, when Associate Principal Jeffrey Chandler, a veteran himself, escorted Collins to the ceremony and read Collins’s biography.

While he left active duty many years ago, Woodruff said that her dad’s dedication to his country has never wavered. In fact, she said that Collins has told her many times that he would have given more.

“He took his oath as a soldier to protect American citizens and the Allies very to heart,” said Woodruff. “His word is his bond so when he did that oath, he still lives by that oath today.”

Woodruff said that Collins always led by example when it came to patriotism, respect for America and respect for one another. She said that she is proud to be the daughter of a man who displayed these qualities and was willing to risk it all.

“I feel very blessed and honored that he was able to make it home because that’s what he says, that he lost many friends and there were a lot of soldiers that did not make it home and it’s really true, freedom is not free,” said Woodruff.

Collins name is among those on the World War I and beyond memorial at Rock Creek Veterans Park in Gainesville, as well as the American Freedom Garden at the Northeast Georgia History Center.

By all measures of the word, Collins is indeed a hero. But he’ll never admit it. 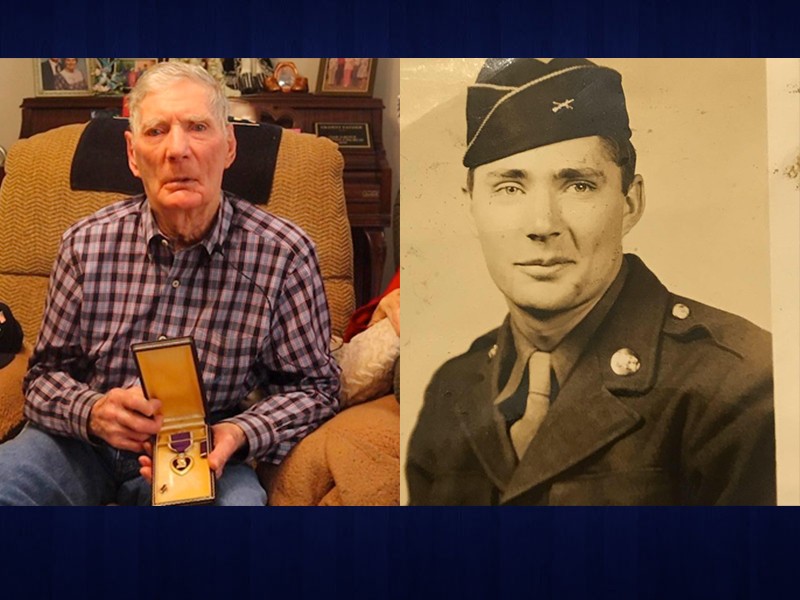 A 95-year-old Ralph Collins displays his Purple Heart Medal at his home in Gainesville (left) and a young Collins in his Army uniform (right).