At dusk on a crisp October night, a man leads a woman accused of witchcraft into a cabin to face trial.

At first glance the scene looks like something that one could have seen if they were living in Salem, Massachusetts between February 1692 and May 1693, as hysteria gripped the rural community and more than 200 people were accused of being witches.

But then a director yells “Cut!” and one realizes the cabin is a set and the man and woman are actors. This scene is actually a part of the virtual programming hosted by the Northeast Georgia History Center at Brenau University.

Staff and volunteers with the history center are broadcasting their pre-recorded reenactment of the Salem Witch Trials for their October Family Day.

“The hysteria started to grow in the winter months and then the trials started in the spring and summer,” explained Marie Walker, Director of Education for the history center. “But because everyone thinks of witches in Halloween, we are doing it for the month of October.”

Walker said that the history center usually invites the public out for a live reenactment, but decided this year to pre-record and broadcast the program due to the COVID-19 pandemic.

This year is the first time that the history center has done a reenactment of the Salem Witch Trials, but staff spared no detail when planning the program.

Glen Kyle, executive director for the history center, said that even the actors’ lines are pulled directly from eyewitness accounts of the trials.

“We have original transcriptions of this examination that have come down to us from the actual trials themselves,” said Kyle. “The words we’re going to be speaking and what the audience will be hearing are pretty close to the exact words that were used during the indictment and during the examination.”

Staff with the history center chose to reenact the trial of Bridget Bishop, a real woman who lived in Salem and faced accusations of witchcraft. Bishop stood trial for the accusations and was eventually executed, along with approximately nineteen other “witches”.

The Salem Witch Trials have grown in popularity over the course of American history and been the subject of many books, plays and movies. One of the most well-known of these is Arthur Miller’s 1953 play The Crucible, which was performed during the time when the accusation “communist” was the equivalent of a witch during the trials.

For this reason and several others, Walker and Kyle each said that the Salem Witch Trials are still relevant today.

“It’s a story that keeps being applicable in American history,” said Walker. “How it’s very easy for everyone to get caught up in yelling at people and naming people.”

“I think one of the things that people see is overzealous desire to persecute,” said Kyle. “It’s very, very easy to sort of turn on your neighbors…it takes the pressure off of you and it takes away that fear of condemnation from your neighbors.”

Walker said that the broadcast will begin at 1 p.m. on Sunday. More information about the program is on the Northeast Georgia History Center website. 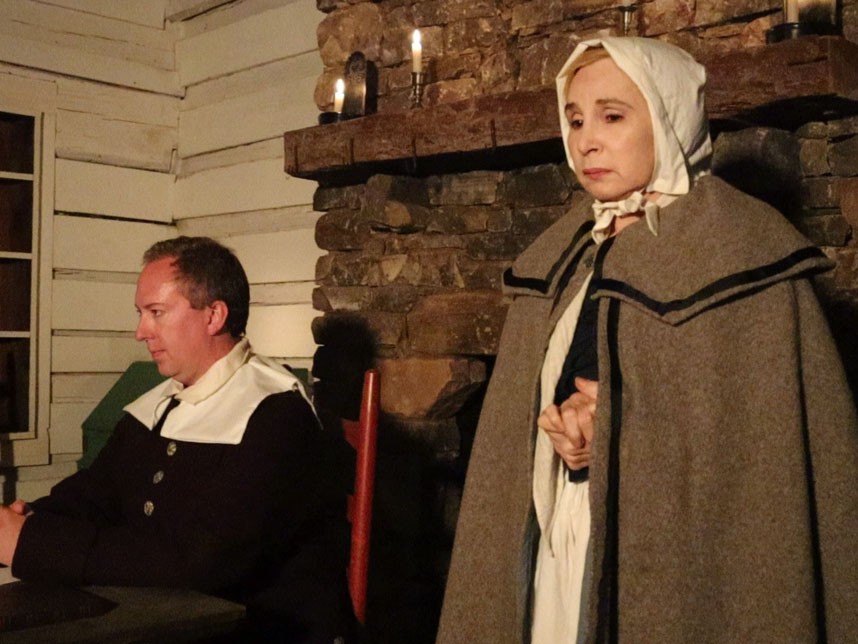 Glen Kyle (left), executive director of the Northeast Georgia History Center, and a cast member act out a scene from the Salem Witch Trials.