Arcade: 'We have an eye toward the future'

There are times when the past can come back to haunt you, and that happens from time to time for the small city of Arcade in Jackson County.

Most North Georgians - at least those over the age of 50 - can tell you that Arcade was at one time 'The Beer Capital of Georgia.'

Reportedly, Arcade began selling beer in the 1940s when most of North Georgia was dry. Some 20 years later, when city leaders established a low local alcohol tax, Arcade became the destination not just for those who wanted something for their personal consumption, but also for wholesalers who loaded up their trucks.

Hugh Blackstock, 84, has lived in Gainesville for decades, but he grew up just a few miles away from Arcade in Jackson County and he remembers that beer was big business.

"What I remember the most about it - and I got this from good sources - is that 95% of the beer that was sold never went into those stores [in Arcade]. It went right from a distributor's truck into other trucks and went to all the dry counties up above here."

Blackstock said Arcade - and specifically Parr's Store - was so well-known that trains would stop to buy beer, even though doing so was a little tricky.

"There wasn't a side track where the train could stop," Blackstock said. "They would actually stop the train on the railroad [tracks] and go across the street to the beer store and come back and start the train back up."

Dick Huff, 70, of Gainesville said a trip to Arcade was a rite of passage for a 16-year-old who had just gotten a driver's license. He remembers stocking up on beer back in the 1960s when he and his friends would make road trips to the University of Georgia in Athens.

"Arcade had the cheapest beer anywhere," said Huff. "I remember driving to Arcade on my way to Athens and loading up the trunk of my car with case after case of cheap beer."

Arcade Mayor Doug Haynie, who grew up in Stephens County and graduated from the University of Georgia, is well aware of Arcade's past. However, he and his fellow elected officials on the Arcade City Council have worked diligently over the past two decades to change the image of the small town they love.

"We have a couple of liquor stores just like any other town would have, but the laws changed and the things that made Arcade 'The Beer Capital of Georgia' no longer exist," Haynie said. "That was the business of the day, and we've spent a lot of years trying to come out from under that shadow and become good corporate citizens and be the town that we are today."

While retail and restaurants are not a big part of the landscape in Arcade, rooftops are. Haynie said Arcade has been growing steadily since the 1990s, and with more industry coming to Jackson County, city officials are preparing for another population growth spurt.

"There was a housing boom in the mid to late 90s. Arcade actually was the fastest-growing town in Jackson County in the 1990s," Haynie said. "If my memory is correct, I think it was a 177% population growth between 1990 and 2000."

Haynie said he and council members have a vision about what the town can become, and they've had the vision since 1998. The city has not had the infrastructure to attract big business, but Arcade does have room for residential development, and that's where city leaders set their sights.

"We still have that vision. There's a lot of open land on the south end of the city of Arcade - down toward Athens - and it will eventually develop from agricultural into residential," Haynie said.

Making Arcade a place to live, work and play

Haynie said Arcade is a bedroom community, as is much of Jackson County, really. People live in the county, but they work elsewhere and they also often leave home for their entertainment and leisure activities. City leaders have spent the last year sprucing up Arcade Park, which was dedicated in 1970, so citizens will have a location to spend their leisure time.

"We have done some major improvements over the last 12 months on the park and we've still got a few things to do," Haynie said. "We believe that the park will be one of the crown jewels of our city."

Haynie said the city has also purchased 10.5 acres at the corner of Old U.S. 129 and SR 82 as a site for a new civic center and amphitheater. Groundbreaking for that project is still a couple of years away.

"We want people to see there's more to Arcade than just the bypass," Haynie said. 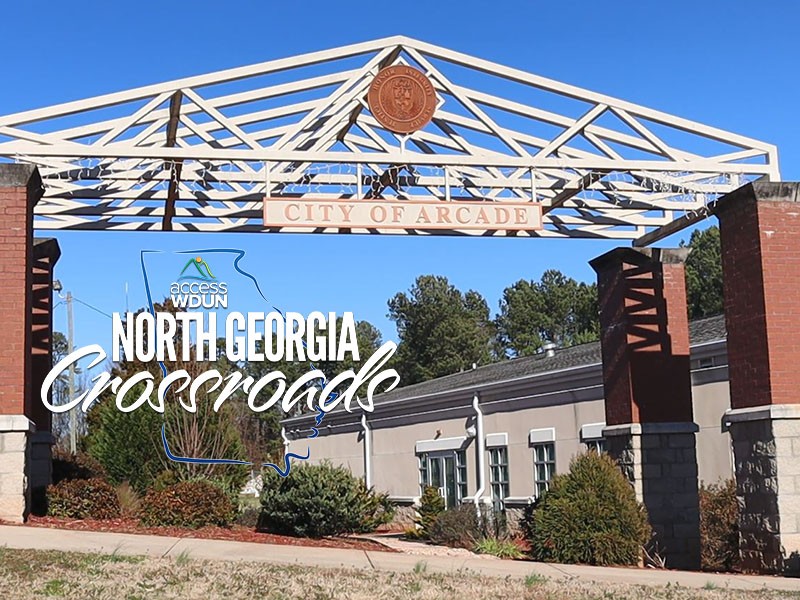