“What put us in a bind today is the flu, and we’ve got several out on FMLA, so we were down a paramedic truck today,” Black said. “Our normal call volume, then you add in one wreck with four patients and another one with three, with three of those trapped, plus other medical calls going on, we had to utilize the service of three other counties in order to help us meet that need today – and there’s more calls going out now.”

The first wreck, involving two vehicles, happened at 3:34 p.m. on Ga. 15 at John Wood Road in the Hollywood area involving a total of four patients.

A half hour later, responders were called to Ga. 365 and Crane Mill Road, where they found three patients, with two trapped in the vehicles, Black said.

The wreck on Ga. 365 at Crane Mill Road involved a 2006 Chevrolet HHR driven by Lillian Davidson, 79, of Alto, that failed to yield after stopping at the stop sign on Crane Mill Road, according to Cpl. John Getty of Georgia State Patrol Post 7 in Toccoa.

The Chevrolet traveled into the intersection of Ga. 365 and the right front corner of the Chevrolet struck the front left corner of a 2009 Toyota Yaris in the northbound lanes, Getty said. The Toyota was driven by Kerry Montgomery, 56, of Clarkesville.

Getty said no one in the wreck was critically injured. 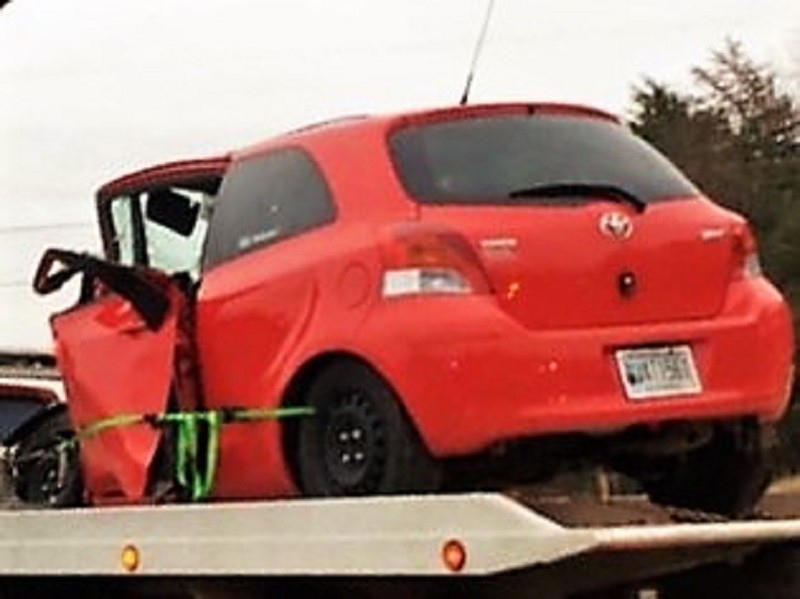 This Toyota Yaris is hauled away after being involved in a two-vehicle wreck on Ga. 365 at Crane Mill Road in Habersham County Monday afternoon.