KANSAS CITY, Mo. (AP) — The Kansas City Chiefs knew they were in the market for a quarterback a couple of years ago and, with several first-round talents available, they invited Clemson’s Deshaun Watson and Texas Tech’s Patrick Mahomes for visits.

Both were put through their paces.

They scribbled plays on whiteboards to test their recall and dissected game film to test their mental aptitude and situational awareness. They went onto the practice field and ran a series of drills to test their athleticism, then were asked to throw every pass in the book, from deft screen passes to intricate timing routes to deep, downfield heaves.

The Chiefs liked everything Watson did over those couple of days.

They loved what Mahomes did.

So the Chiefs traded up to select Mahomes with the 10th overall pick. The Houston Texans jumped on Watson two picks later. And the start of their professional careers have continued to run side by side, with Mahomes leading the Chiefs to back-to-back AFC West titles and the brink of a Super Bowl appearance last season, and Watson guiding the Texans to consecutive playoff appearances for the third time in franchise history.

Now, their parallel paths will intersect when the Texans visit the Chiefs in the divisional round of the playoffs on Sunday.

“How great is that for the National Football League, first of all, these good young quarterbacks?” Chiefs coach Andy Reid said. “We actually brought Deshaun up here, too, before the draft and had a nice visit with him. We have a ton of respect for him. He’s a great player, he was great in college, he is great now. He’s going to do nothing but get better as time goes on.”

Watson was especially impressive last week, leading the Texans (11-6) back from a 16-0 second-half deficit to beat the Bills 22-19 in overtime. He threw for a touchdown and ran for another in a performance reminiscent of his Week 6 game against the Chiefs when Watson threw for a score and ran for two more in a 31-24 victory at Arrowhead Stadium.

“When you have guys like Deshaun and Patrick, you don’t want to over-coach them,” said Texans coach Bill O’Brien, who also had both quarterbacks in Houston for pre-draft visits in 2017. “They have such great instincts. They see the field very well. With Deshaun, you might be able to point out a few things, but his guy has a huge heart and he’s doing what is best for the team and trying to win games, and you don’t want to over-coach that.”

That win was especially sweet for Watson, who has a bit of a chip on his shoulder about Kansas City choosing Mahomes over him. And the win should give the underdog Texans a boost of confidence knowing they have beaten the Chiefs (11-5) and their star QB once this season.

“It’s cool to see a fellow friend of mine and a guy that’s playing the same position as me have so much success and see it in live-action. So it’s definitely dope,” Watson said. “It’s going to be a good experience. Like you said, we played earlier this year. It was a good game, went back and forth. But yeah, it’s just two good teams going head to head and we’re just trying to be the best we can for our team and help our team win.”

Trying to figure out what has changed since that October matchup — and how to counter it — could be one of the biggest storylines Sunday. Here are a few more to watch as the Texans and Chiefs play for a spot in the AFC championship.

The Texans’ J.J. Watt was in for about 50 plays and had a sack against the Bills in his first game since missing eight with a torn pectoral muscle that required surgery. The three-time NFL Defensive Player of the Year wouldn’t say whether he expected to play more Sunday.

“Just because I played one game doesn’t mean my pec magically healed. It’s still in basically the same situation it was in before this game,” he said. “After not playing football for two months, then playing 50-plus plays, you’re going to be sore, you’re going to be a little beat up. It was a quick reminder of how difficult the game of football is when I woke up on Sunday morning. That extra day was nice to be able to rest and recover and get back to work now with the guys.”

On the opposite sideline, the Chiefs will be turning to backup safety Armani Watts to help fill the void created by the loss of standout rookie Juan Thornhill to a torn ACL in Week 17. Watts has primarily played on special teams this season, but he showed plenty of promise as a rookie last season before a season-ending groin injury in October.

FULLER (TO THE) HOUSE

The Texans’ offense could be buoyed by the return of Will Fuller V, who has been out with a groin injury. The wide receiver was close to playing against Buffalo, and O’Brien said he’s been “trending in the right direction” but was noncommittal about whether Fuller would play against the Chiefs.

Fuller gives the Texans a big downfield threat and the opportunity to score regardless of down and distance.

A big reason why Houston beat the Chiefs in Week 6 was Carlos Hyde, who rumbled for 116 yards and scored two touchdowns against his former team. The Texans also ran the ball well last week against Buffalo, while Kansas City’s own offense has struggled to find balance behind running backs, Damien Williams, Darwin Thompson and LeSean McCoy.

The Chiefs have tried to keep McCoy’s workload in check, even making him a healthy scratch late in the year, and now it’s time to see whether the veteran running back still has a couple of big games in him.

Houston’s third-string running back, Taiwan Jones, appeared in 11 games during the regular season but was used almost exclusively on special teams before the regular-season finale when many players rested with the team’s playoff spot secured. But against the Bills, when Watson escaped two sacks and rolled out to make a play in overtime, it was Jones who he found for a 34-yard reception to set up the winning field goal.

“I’ve been patient and I’ve been working all off-season, all season and it means a lot for the coaches to call my number in a crucial moment like that,” Jones said. “It reminds me that they do believe in me like I believe in myself.” 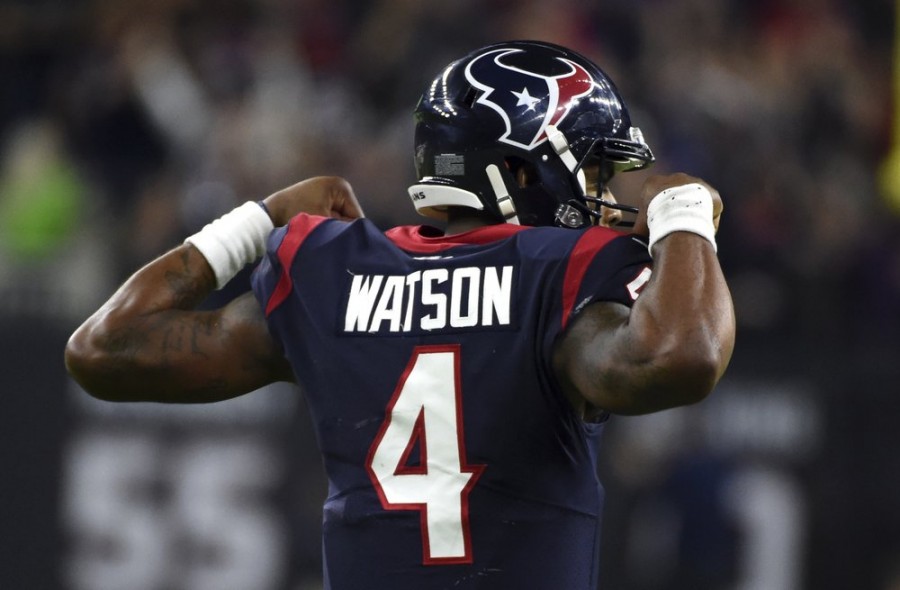 Houston Texans quarterback Deshaun Watson (4) celebrates after throwing a pass to setup the game-winning field goal during overtime of an NFL wild-card playoff football game against the Buffalo Bills Saturday, Jan. 4, 2020, in Houston. The Texans won 22-19 in overtime. 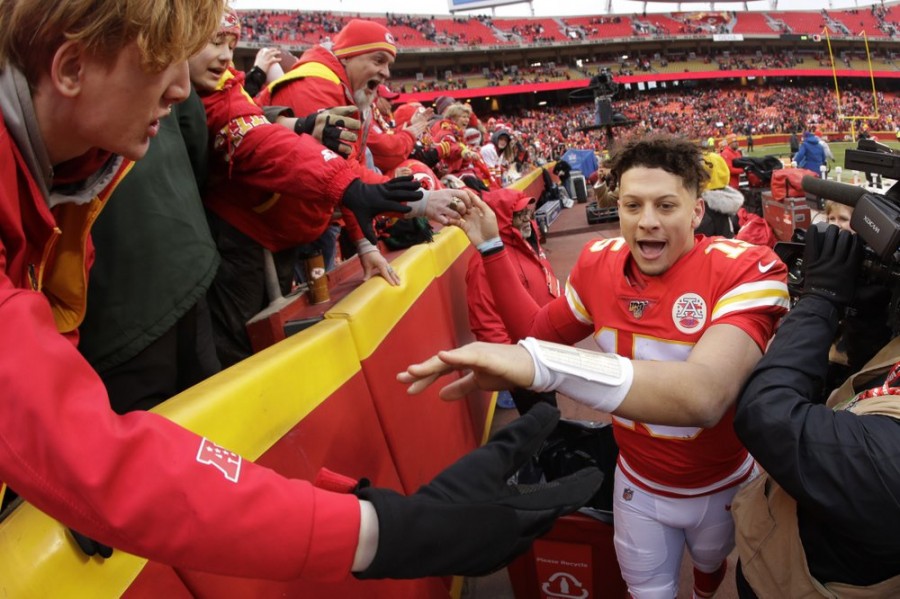