Maysville: 'You learn to grow with the people'

MAYSVILLE – Some 150 years before Banks Crossing rose to the forefront as one of North Georgia’s top shopping destinations, the community that would become Maysville was the area’s center of trade.

“Maysville, to me, is a small, unique city where everybody in the town knows everybody,” said Maysville City Administrator/City Clerk Barbara Thomas.

“You learn to grow with the people,” Thomas said. “You have a close relationship with them, and you can provide better customer service to those people.”

The town is steeped in history, being formed as Midway in 1847 because it was midway between Lula and Harmony Grove (Commerce).

Maysville was incorporated on Sept. 30, 1879, and the town limits included parts of both Banks and Jackson counties. The town limits were drawn ¾ mile in all directions from the Southern Railroad depot downtown, located where city hall employee parking now is located on Main Street.

Two significant fires in the town, in 1880 and 1897, resulted in a great deal of damage, but each time the town was rebuilt.

“Maysville, back in the late 1800s, actually had three banks, a cotton gin, and a movie theater,” Thomas said. “It was a very busy little city. We had a little, what they called back then, mercantile store downstairs where everybody came to town to do their shopping.”

In those days, regular passenger train service operated daily between Lula and Athens, stopping at the depot in Maysville to hire buggies to reach Holly Springs, Dry Pond and Homer, according to a document by Maysville historian Richard J. Chambers.

In the early 1900s, agriculture was the primary activity in Maysville. There were four cotton gins, the largest of which was located on the property that now is home to the public library next to Maysville Area Volunteer Fire Department on Ga. 52.

By 1919, there was a plant to process cottonseed oil, a fertilizer plant and a chair factory. Additionally, there were four physicians, two dentists, a four-bed hospital (upstairs in the block where city hall currently is located), two veterinarians, two attorneys, four general stores, a millinery shop, shoe repair shop, garage, livery stable, a weekly newspaper, two hotels, two boarding houses, a funeral parlor, and a bicycle repair shop, according to Maysville historians. Also, at that time there was a telephone exchange with two telephones, one in the railroad depot and one in Tom Boone’s General Store.

The Great Depression and later the collapse of the cotton market had devastating effects on the city.

In recent years, the city has seen construction of two feed mills and the addition of hundreds of residents.

The railroad still bisects the city, with trains serving the two feed mills in Maysville and other businesses along the tracks between Lula and Athens.

Jack T. Smith frequently can be found sitting beside the railroad tracks downtown watching for trains or just watching the traffic on Ga. 98 and Ga. 52.

“I come out here about every day when it’s warm,” Smith said, adding he likes the closeness of the community.

The railroad tracks bisected Maysville between Banks and Jackson counties, so in 1908 an election was held asking citizens whether they wanted the city limits to remain in both counties or have the lines changed to place Maysville in one county or the other.

In that vote, 64 residents wanted Maysville to be located entirely within Banks County, while 57 voted for no change. Those opposed to the change petitioned a local judge to rule that the election procedures were irregular, which he did. The ruling was appealed to the Supreme Court of Georgia, which upheld the judge’s decision, so Maysville remains split between the two counties.

Interestingly, it’s not just the city that is divided between the two counties.

“City hall downstairs is kind of unique because the front part of city hall is actually in Banks County and the back part, where my office is, is actually in Jackson County, so we’re kind of split,” Thomas said.

Thomas said growing up near Maysville gives her a unique perspective on where the city has been and where it can go again.

“I was born here,” Thomas said of the Maysville community. “I lived on a farm of 88 acres. I am one of 11 children and I can remember coming to town and the roads out here being dirt and there was no paving downtown.”

Despite the dirt roads, the city flourished.

“It’s just a little, unique town, but back then when all the roads were dirt there was a lot more businesses here and they seemed to be doing well because everybody came from the outside to downtown to do their shopping. They didn’t go to like Commerce – none of that was here. If they did anything, they came into Maysville to do it.”

Maysville’s population continues to grow exponentially, almost tripling in a decade and a half.

Keeping pace with that type population growth over a 15-year period can be a challenge.

“We have a mayor and a council that work really well together, and they try to stay ahead of the progress that’s going on in Maysville,” Thomas said.

Smith has lived in Maysville for 51 years.

“It’s changed a right smart” over those years, Smith said. “There’s been a lot of subdivisions come in.”

Smith, who worked in feed mill operations in Winder and Gainesville for some 30 years and later drove cars for area dealerships for a decade, said he would like to see Maysville’s downtown grow, especially with locally owned businesses and eateries.

“We just ain’t got enough restaurants,” Smith said. “We ain’t got but one.”

Downtown Maysville is ripe for development

As city administrator, Thomas said Maysville’s downtown area has several quality businesses but is ripe for an investor or developer with vision to come in and revitalize buildings in the central business district.

“We just need public development downtown,” Thomas said. “We’ve had several people come in and try to help with the downtown area. We have a lot of assistance from [Georgia Mountains Regional Commission] out of Gainesville, and they have kind of given us some suggestions. [Those suggestions] seem to kind of be working in the beginning but they kind of fade out. People just get tired. Businesses come in and they say ‘well, we can’t make it’ and they leave.”

Thomas said she envisions a vibrant downtown with restaurants, shops and professional offices, an area that would serve residents of the city but also bring in those from around the area to shop, dine and conduct business.

“We do have quite a few vacant buildings downtown that we would love someone to come in and buy,” Thomas said. “The only thing that we have in place is we would like the front of the building, the façade, to remain and then build around the façade, but there’s a lot of potential [in the] downtown area for the right person to come in and have a vision and really go forward with that vision.”

Currently, Maysville remains a dry city, meaning alcohol is not served. That’s something Thomas said a lot of the locals want to see remain, even though serving alcohol could bring more business.

“I think Maysville being a wet city would bring more revenue into town, but we have a lot of old-timers that live here that do not want it,” Thomas said. “They like Maysville being just good ol’ Maysville. They don’t want change.”

Still, Thomas said she hopes to see the city grow. 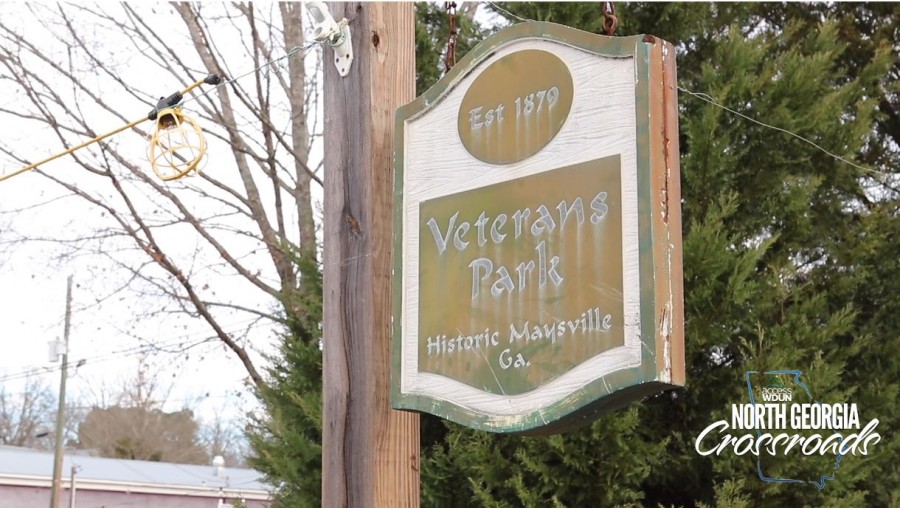