KANSAS CITY — The Braves shut down Ronald Acuña Jr. for the remainder of the regular season Wednesday after the All-Star outfielder left their series opener against the Royals with tightness in his left hip.

Braves manager Brian Snitker said Acuña was examined by the Royals' team physician, who recommended he sit until the playoffs. Snitker said the decision is largely precautionary, and Acuña can continue to throw and hit while sitting out the final four games.

"It's just biting him a little bit," Snitker said, likening the injury to a mild strain. "It's just one of those things that if he goes (hard), it could end up being something really bad if we're not careful. So, we just felt like it was better off just to shut him down for the remainder of the weekend."

The Braves already have clinched the NL East. They were eliminated from the race for the top seed on Tuesday night, so they will start the divisional round of the playoffs against the NL Central winner — likely the St. Louis Cardinals — on Oct. 3 at SunTrust Park in Atlanta.

Snitker did say Acuña's injury is unlikely to affect his postseason roster.

"We'll meet Monday and Tuesday, Wednesday morning," Snitker said. "I don't think anybody feels like he's not going to be full-bore, ready to go. This is just making sure."

In other injury news, Braves outfielder Ender Inciarte ran the bases Wednesday night to test his strained right hamstring, which has sidelined him since August 10.

"We'll see how he feels. Again, tomorrow they'll put him through his paces, and it's always the day after, how he feels," Snitker said. "We'll know more about him tomorrow."

Inciarte, who is hitting .246 with five homers and 24 RBIs, has been taking batting practice along with hitting off the velocity machine. His return to the lineup could help ease concerns should Acuña's injury keep him out longer than the Braves anticipate.

Snitker said first baseman Freddie Freeman remains on track to play Friday night against the Mets after getting time to rest his sore elbow, though the news wasn't so positive for Johan Camargo.

The Braves' switch-hitting utility man sustained a hairline fracture in his right shin when he fouled a pitch off his leg earlier this month. The club initially thought Camargo would miss about three weeks, potentially putting him in line to return for the postseason.

"He's not progressing as quick as we'd like. Still having trouble putting total weight on it," Snitker said. "So, I don't know. I guess there's still hope. Right now he's still really sore." 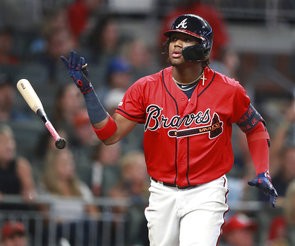 Atlanta Braves Ronald Acuna Jr. hits a 2-RBI home run to take a 4-2 lead over the San Francisco Giants during the fifth inning in a MLB baseball game on Friday, Sept. 20, 2019, in Atlanta.