Everything changing at Georgia Tech under Collins

ATLANTA — Georgia Tech will be familiar with the offense The Citadel will run on Saturday because it's what the Yellow Jackets used for 11 years.

It's one of few certainties for Georgia Tech right now under new coach Geoff Collins.

It's all part of the process as Collins remakes the program.

"This is a monumental transition unlike what's probably happened in college football in a long time," Collins said. "Every single day we're a work in progress in every phase of everything we do."

Tobias Oliver started at quarterback against Clemson, and James Graham and Lucas Johnson also played. Against USF, Johnson started, and Oliver and Graham rotated in and out, sometimes on a play-by-play basis. Oliver also returned the opening kickoff, and lined up a few times in the slot.

Some of this is just Collins, who in two seasons as Temple's coach also used players on both sides of the ball. And some of it has to do with the number of newcomers on the team. When the season began, Tech had 11 true freshmen and 11 redshirt freshmen in the rotation, with 11 seniors.

On offense, the Yellow Jackets are still doing some things they did under former coach Paul Johnson's triple-option attack, which The Citadel (0-2) also runs. Georgia Tech is using option plays and designed quarterback runs, with QBs accounting for 24 of Tech's 49 rushing plays against USF.

Except they work out of the shotgun rather than from under center.

"We inherited a roster that's built a certain way. ... We have to play to their strengths," Collins said after the USF game. "We will just continue to develop them. We are a player-based offense. We are not a scheme-based program."

The same goes for defense.

Coordinator Andrew Thacker and Collins, whose background is on the defensive side of the ball, prefer for their backs to play a lot of press coverage. They didn't do that much in the season-opening loss to No. 1 Clemson but were reasonably successful against USF.

But how does a freshman cornerback end up playing defensive end, as Kenan Johnson did on long-range USF third down situations?

"When we get into those situations, we can be really creative with who we put on the field," Thacker said, adding: "We don't have Von Miller on our team. We don't have Khalil Mack, so we're not going to be confined by body types or tradition."

Amid the creativity, Collins is trying to create an energetic, all-go-all-the-time atmosphere.

"The whole goal of this program is to prepare these young men that play for us for life after college," Collins said. "In their life, being CEOs, being heads of businesses, being entrepreneurs, whatever the case may be, playing in the NFL, if they have that mindset every single day, they're going to be successful." 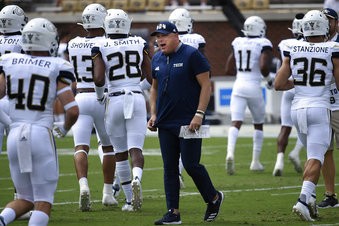 FILE - In this Saturday, Sept. 7, 2019, file photo, Georgia Tech head coach Geoff Collins walks the field during warm ups before the start of an NCAA college football game against South Florida, in Atlanta. Collins has his first win at Georgia Tech, so that's out of the way. But two games into his coaching tenure, it still looks like a very difficult year on the Flats.